There is probably no state in the United States of America that faces more financial challenges going forward than Illinois.

I have written about some of the budget challenges facing Illinois previously. This is what I wrote in a blog post last June about the dire financial situation in the Land of Lincoln.

If it was not illegal to file for bankruptcy under federal law it would probably soon be filing.

Today is the deadline for Illinois to pass a constitutionally-required balance budget. Never mind the balanced part, Illinois has not even passed a simple budget plan the last two years.

It is doubtful that the third time will be the charm in Springfield.

Why is Illinois in such dire straits?

The biggest reason is that the politicians in Illinois gave the state away to the public sector employees. They promised generous pay and retirement benefits but failed to back up the promises with the necessary funding.

This is how CNN Money explains it.

While the budget impasse is throwing a spotlight on Illinois's dire financial situation today, the fiscal problems go back at least to the 1980s and involve politicians from both parties.

The most glaring evidence is the enormous pension crisis. Rather than dealing with the problem, Illinois continued to reward the state's powerful unions with more generous benefits.

The problem festered for so long that Moody's estimates Illinois has unfunded pension liabilities totaling $251 billion. To put that into context, that's more than the combined market value of four major Illinois companies: Boeing (BA), Caterpillar (CAT), United Continental (UAL) and Allstate (ALL).

Despite the effort, the Illinois Policy Institute projects that state is already on track for a $1.3 billion deficit for the current fiscal year.

The budget problems in Illinois are most directly tied to those pension benefits for public sector employees. The result is that most everything else that most people want their state to prioritize (K-12 education, higher education, public safety, roads, human services) is getting crowded out. 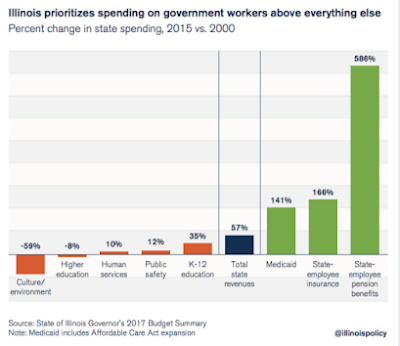 All of this is not lost on the people of Illinois. They elected Rauner in 2012 hoping that he could do something about the sorry state of affairs. However, it appears that the swamp is every bit as deep in Springfield, Illinois (and Chicago) as it is in Washington, D.C.

A recent Gallup survey showed that residents of Illinois have the most negative view of their state of any of the 50 states. I found this chart on Reddit.com. 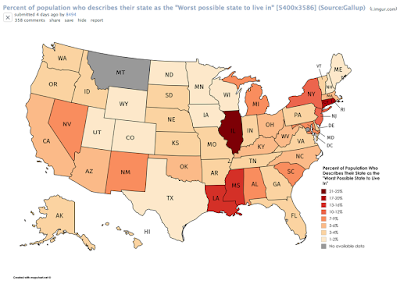 All of this is resulting in more and more people leaving the state. Just short of 115,000 Illinois residents left the state in the last year. Since 2010, the net population loss in Illinois has been 650,000 according to the Illinois Policy Institute.  Illinois is now estimated to have fallen behind Pennsylvania in total population--- dropping from 5th to 6th.

Of course, all of this just will make the budget problems of Illinois worse. With people leaving the state, so goes their money. This means fewer taxpayers are left to pay the bills. Tax increases will inevitably push more people out of the state and the vicious economic cycle continues.

The Illinois state corporate income tax is 9.5%, effective July 1, 2018. That will be one the highest rates in the country. That rate is almost double what it was in 2010. The individual rate has gone from 3.0% to 4.95% (Illinois is one of 9 states that uses a flat rate system applied to all taxpayers regardless of income) over the same period.

Individual taxpayers in Illinois also now face the new limitations on the deductibility of state and local taxes in the new federal tax law. Taking into account sales taxes, property taxes and other state and local taxes, Illinois had the 5th highest state local tax burden in the country in 2012 as a percent of state income. Let it not be forgotten that this was before  the newly enacted tax increases.

Here are the top 7 states for highest state and local tax burden according to The Tax Foundation.

Is it just a coincidence that 6 of the 7 states on this list are among those states where the residents also believe their home is "the worst possible state to live in"?

Is it also a coincidence that Wisconsin is the only state on that list that the residents do not feel that way?

Is it also just by chance that Wisconsin was the only state on that list that Donald Trump won in 2016?

There appears to be a reason why the the people in blue states are feeling blue.

And no state is feeling bluer than Illinois right now.
Posted by BeeLine at 6:15 PM