The United States has been struggling with illegal immigration over its southern border for decades.

There is little doubt that a significant reason that Donald Trump won the 2016 Presidential election was due to his tough stance on doing something about the issue.

Over two years into his term as President the flow of illegals storming the border has actually reached crisis levels. This is particularly true for those who are attempting to take advantage of asylum requests and those who understand our liberal rules for those traveling with children. They are using loopholes in our law to insure that they get into the country knowing they will not be turned away.

If you doubt that, look at this chart of illegals apprehended at the border traveling with children. 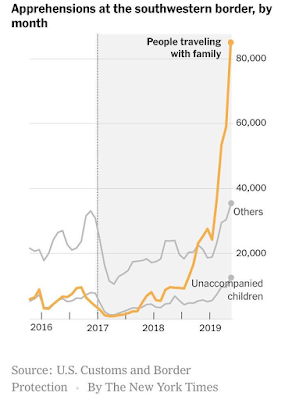 Let's put the numbers above in context. Last month saw 130,000 illegals apprehended at the southern border. This does not include those that eluded capture. That equates to over 1.5 million illegals on an annualized basis. Under current immigration law, the current annual limit for legal immigrants per year is only 1.1 million. Even at that, the 1.1 million legal limit is well above the number of immigrants that any other country in the world is accepting.

It is not hyperbole to look at these numbers and conclude that we are under invasion at our southern border.

Could it be that the people in these countries believe Donald Trump?

Could it be that people in these countries believe that Trump will get his wall or change the law?

Could it be that these people believe that time is running short if they want to get into the United States?

As a result, we have seen this unprecedented surge.

If they do believe that Donald Trump is serious about illegal immigration I would suggest they are most astute.

If there is anything that people should have learned about Donald Trump by now is that he is a man who is not easily deterred from the goals he establishes for himself.

If there is one word that I would use to describe Donald Trump it is this one. Indefatigable.


We saw it again last week when he announced he would be imposing a 5% tariff on all Mexican imports into the United States, and that tariff would increase by an additional 5% per month to a maximum of 25%, until Mexico agreed to steps to help curb illegal immigration.

Predictably, Trump's action was met by widespread criticism. This included many Senate Republicans. Most said it would not work. Tariffs are not the way to negotiate. It would raise prices on American consumers. Yada, yada, yada. Blah, blah, blah.

Trump undertook all of this as he was also visiting the United Kingdom, Ireland and France as part of D-Day remembrances.

It took less than a week for Mexico to announce that it would take stronger measures to stem the flow of illegal immigrants to the U.S. border including deploying 6,000 troops to the Guatemalan border where many from Central America cross into Mexico on the way to the United States. In turn, Trump announced that he would indefinitely suspend the tariffs pending these actions.

Predictably, the New York Times was out with a story shortly after the agreement was reached that Mexico had agreed to most of the measures months in advance of the tariff announcement. The story was clearly meant to minimize Trump's accomplishment.

Senate Majority Leader Chuck Schumer attempted to characterize what Trump accomplished with the Mexican agreement as "caving in" on the issue. Of course, if Trump had gone ahead with the tariffs after Mexico agreed to take action he would have called him unhinged and unfit to be President. 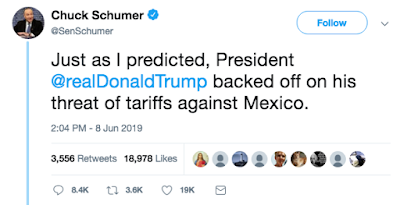 I have no doubt that some or all of the measures had been under discussion with Mexico for months.

However, talk always gets a lot of currency in Washington, DC and in diplomatic circles. I think most people outside the beltway are more interested in results and action. That includes Donald Trump.

What has been missing from Mexico on this issue has been concrete action. We now see something. Whether it translates into results remains to be seen. However, if we don't see results I have no doubt that Donald Trump will take additional actions.

Say what you want about Donald Trump but the thing that sets him apart is that he is not afraid to take action. He is not afraid to face criticism. He is unrelenting. He persistently works to achieve his objectives. There is no quit in him.

What I do know it that he is indefatigable. He relentlessly pushes his agenda forward. That, more than anything, defines who he is and why he should never be underestimated. That is also why the Democrats and liberal media despise and fear him so much.
Posted by BeeLine at 3:11 PM