I used to do some tax lobbying work in Washington, D.C.. Early in my exposure to the world of Washington the head of Government Relations for a Fortune 500 company, who previously had been a top House staffer, told me, "Facts don't matter. Logic doesn't matter. Perception is reality. You always need to remember that in this town".

Look no further than the events surrounding the shooting of Michael Brown in Ferguson, MO. The perception that the protestors have of that event are far, far different than the facts that came out of the grand jury proceedings. Facts and logic cannot compete with perception and emotion. That is simply the way the human brain operates.

Misalignment between facts and perceptions is also a recipe for bad public policy decisions. If people have the wrong perception they will often gravitate to the wrong policy prescription.

For example, I have little doubt that the increased momentum for gay marriage is driven by a perception that homosexuality is much more common than it is.  I have written about this before in my blog post, Where Is The Bias?

When asked what percentage of the United States population is homosexual, most people estimate 25%.

The actual number is 1%-2% according to most studies.

How can the perception be so far from the facts?  As I wrote before,

I think it derives from the heavy influence of Hollywood and the news. Consider the number of movies and television shows that have gay characters and the disproportionate number of news stories that focus on gay rights, gay marriage or other gay issues.  It is truly a situation where the loudest single person in a room of 50 gets all the attention.  You never even get to hear from the other 49.

It also derives from the inability of most people to use the analytical portion of their brain.  I call it the reflective side of the brain.  On this and many other issues the reflexive side of the brain simply overwhelms logic.  For example, if you really stop and think, do you really think that 1 in every 4 or 5 people you see in a day are gay?  The people you work with?  Your family members?  Your friends? Walk down the street.  1 in every 5?  No way.

People reach the conclusion they do because of what is called "availability" bias.  In simple terms, we estimate frequencies or numbers based on the ease with which instances come to mind.  If retrieval from the brain is easy and straightforward we tend to judge the numbers in the category to be large. People see and hear a lot of stories about gays and gay rights, therefore, when asked to guess a percentage it is high.

I recently came across an international study involving 14 countries (including the U.S) in which people were asked to estimate basic facts about their population or social issues. This results of this study clearly shows the huge gap we often find between perception and reality.

A few examples from that study about the perceptions that Americans have compared to actual reality. The numbers below are the average guess to the question (perception) compared to the actual fact (reality).

What percentage of girls aged between 15 and 19 give birth each year?

What percentage of the population do you think are immigrants in your country?

What is the percentage of Muslims in your country?

What is the percentage of Christians in your country?

What percentage of people are over age 65?

What percentage of working people are unemployed and looking for work?


As an educated reader of BeeLine you are probably looking at these answers with the same disbelief than I did. How could people be so ignorant and so wrong? How could they be so far off base?

It becomes even more troubling when you consider that all of these people have a vote, just like you and I do. And these perceptions are their reality.

However, the reality is that you really can't blame people for having these perceptions. A lot of these perceptions (as is the same with the percent of gays) are driven by the media, movies and availability bias. How often do we hear about teen births? Immigration reform is constantly in the news. We seem to hear much more about the Koran than the Bible in the media. Social Security. Medicare. Unemployment. We hear about these things often. It is very available and it creates perceptions in people that are not based on facts.

People are not stupid despite what Dr. Jonathan Gruber may think. However, their perceptions and emotions can be manipulated when they get distorted information, biased media reports or facts that lack context.

You also begin to understand some of the misplaced priorities we see in our public policy that are based on false perceptions when you think about it.

Out of the 14 countries surveyed, the United States placed 2nd in the study's "Index of Ignorance". This means that our perceptions are the 2nd furthest from reality. The Italians are the only ones who are further removed from reality than we are. Thank goodness for that! 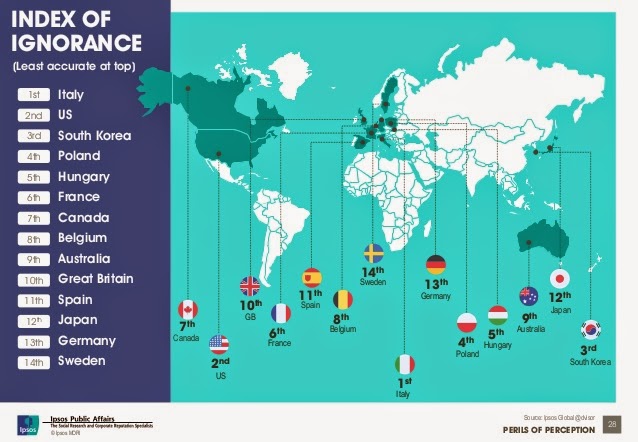 We cannot begin to solve our problems in this country until we can do a better job of matching perceptions with reality.

That is a big reason that I write BeeLine. The Shortest Route To What You Need To Know.

Keep passing it on.

We need fewer perception misconceptions in this country.