My home state of Ohio voted down a constitutional amendment that would have legalized medicinal and recreational marijuana by a 64%-36% margin yesterday.

The group that put the issue of the ballot, "Responsible Ohio" (talk about a name meant to confuse the voter!) was a group of ten investors who would have owned a monopoly to supply all the pot that would have been sold across the state.

Through October 14, the group had spent over $15 million to get the issue on the ballot and to try to get the amendment passed. It is estimated that the final amount that was spent by the group was close to $20 million. The pro-pot group out-raised the group who opposed the measure by 16 to 1 according to the  last campaign finance report filed November 3.

To say the least, it appears to have been a very poor investment by those who supported "Responsible Ohio".

I was concerned about the vote because there was a very visible ad campaign for the measure and the opposition was almost invisible. The pro-marijuana ads also almost totally focused on some heart-wrenching stories about situations where marijuana might be helpful from a medicinal perspective.

Needless to say, I was pleased with the vote results as I believe the legalization of marijuana would be a very negative step for my state and our society.

I came to have a very negative view of marijuana (as well as other drugs) when I was in college. I saw many fellow students with great talent and potential begin smoking marijuana and inevitably watched as they slid down a path where they lost their motivation, ambition and focus.

It was sad to see and I steered well clear of the temptation to try it and did not generally associate those who did it regularly. Unlike Bill Clinton I do not even have to say that I did it but I did not inhale it.

If you want the best evidence of what I am talking about, click on the link below to view a clip from WDTN.com in Dayton, Ohio which had a discussion on election day morning about the marijuana issue (Issue 3) and try to understand what the marijuana advocate that was on the show is talking about.

Although this gentleman is on the opposite side of the issue from me, this is one of the most painful interviews I have ever witnessed. I truly felt sorry for him. Again, like Bill Clinton, I truly felt this guy's pain.

Watch the entire interview if you can so you can see the contrast between the two advocates. However, if you have limited time, the fun  pain really begins at around 2:20 of the clip. 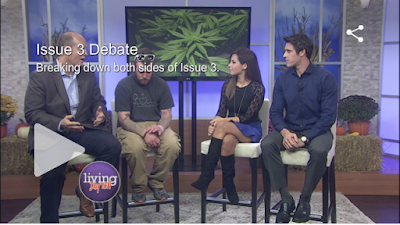 Do you want to warn your children about what happens to you by smoking marijuana? Have them watch this video.

I should point out that Mr. Keller is an Air Force veteran who should be commended for his service. It is also possible that he had tv stage fright that resulted in his puzzling and perplexing appearance. There may have also been some other reason beyond a drug-riddled mind.

However, from a purely political perspective, if I am a group spending $20 million on an issue why would I let a guy like this represent me on a tv show as a supporter of the issue on election morning? That was hardly a responsible decision.

I am also sensitive to the views of my libertarian friends who look at issues like this and believe that government has no business prohibiting or regulating marijuana use. In a truly libertarian world, I would agree.

However, we do not live in that world. We put a lot of emphasis on individual liberty and rights with little consideration of the consequences and costs when someone exercises those rights to society's detriment.

In my view one of the big problems we have in the country today is our inability to draw the line between rights and freedoms on the one hand and consequences and costs on the other.  Where do individual rights end and where does the the public interest begin?

We have too often ignored the primary principle that people should have to live with the consequences of their own behavior.  You fail to take advantage of the free public education that everyone has access to in this country and can't get a job.  That's ok, we have welfare assistance.  You have a child out of wedlock.  That's ok, we will give you money to pay for the child. You buy a flat screen tv rather than health care insurance.  That's ok, just go to the emergency room and someone else will pay your medical bill.

At the same time each of these actions is spilling over onto other people who were attempting to live their life responsibly without infringing on others. The person who studied and went to school, married, had children and bought healthcare insurance rather than the flat screen tv ends up paying these bills as well as their own.

We have been living in an era over the last generation where individualism has reigned supreme in the United States.  Respect for the individual and their rights has been preeminent over the collective good in most instances.  It has been more about ME than WE.

A good example is the federal court ruling several years ago enjoining Florida from requiring welfare recipients to take a drug test before they can qualify for public assistance.  The court ruled that such a requirement in the Florida law is an "unreasonable search".  Where do these judges come up with this logic?  A similar court decision enjoined the state of Florida from using random drug testing of state employees. Bear in mind that the majority of private sector employees today cannot get a job without submitting to a pre-employment drug test.

How does any of this make sense?  In effect, we know that most of the people in the private sector are clean, drug free and paying taxes.  However, those people are not allowed to even ask whether the people they are supporting have even a chance of getting off welfare at some point in the future. After all, if you can't pass a drug test, you most likely are not going to get a job and get off welfare since it is a condition of pre-employment with the majority of employers.

That is one of the reasons I am not in favor of marijuana legalization. Smoke all you want as long as your actions don't spillover on me. However, don't ask me to pay your bills when you can't keep a job, get fired from your job or can't get a job because you can't pass a drug test.

That is what a Responsible Ohio or any other state would look like.