We are in college graduation season but many are asking whether colleges and universities will ever be the same after Covid-19?
That is an open question but they clearly will not be the same in the upcoming academic year.
Colleges have faced economic challenges related to external events in the past. Some colleges closed as a result of the Civil War. My undergraduate alma mater, Miami University in Oxford, Ohio, which in 1838 was the fourth largest university in the country (behind only Harvard, Yale and Dartmouth), had to close due to declining enrollment in the aftermath of the Civil War and the financial panic of 1873. It closed that year and did not reopen again until 1885.
World War I and II presented similar financial challenges due to declining enrollments but a number of colleges received a financial boost as the military used many schools and their facilities for officer training and other uses.
Covid-19 presents no such possibilities when social distancing is directly contrary to the traditional college and university on-campus model.
The challenges are going to be monumental for colleges this Fall as The Wall Street Journal outlined in a recent article.

From schools already on the brink to the loftiest institutions, the pandemic is changing higher education in America with stunning speed.

Schools sent students home when the coronavirus began to spread, and no one knows if they will be back on campus come fall. Some colleges say large lecture classes and shared living and dining spaces may not return. Athletics are suspended, and there is no sense of when, or if, packed stadiums, and their lucrative revenue streams, will return.

Every source of funding is in doubt. Schools face tuition shortfalls because of unpredictable enrollment and market-driven endowment losses. Public institutions are digesting steep budget cuts, while families are questioning whether it’s worth paying for a private school if students will have to take classes online, from home.

Several surveys predict that colleges will face at least a 20% decline in Fall enrollment for a variety of reasons.
These surveys also do not take account of the potential loss of foreign students who may find it difficult to even travel to the United States this Fall.
It is important to also remember, as I have pointed out in these pages previously, that the largest group of foreign students in the United States over the last decade have been from China.
The most recent year that data is available (2018), shows that over 1.5 million international students have been enrolled in U.S. colleges and universities. Almost 500,00 of those students were from China. 250,000 were from India.
These are the 10 national universities with the highest percentage of international students comprising their enrollment according to US News and World Report.
Here is the list for private liberal arts colleges that will undoubtedly will face the greatest financial pressures from declining enrollment and higher costs.
One expert on higher education predicts that 200 liberal arts colleges will have to permanently close their doors over the next year as a result of the financial aftermath of Covid-19.
Below is a chart from my earlier blog post, "Chinese College Invasion" which shows the universities with the highest numbers of students from China in 2015. I have not seen any recent updates of this data but this gives you a sense of how dependent a lot of universities have become to revenues from Chinese students over the last decade.
The University of Illinois and the University of Southern California with almost 8,000 Chinese students each.
Purdue and Northeastern with over 7,000.
Columbia, Michigan State and Ohio State with over 6,000. 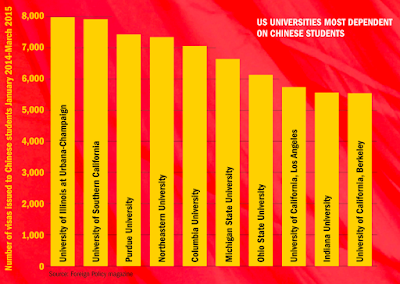 You can expect that the impacts of Covid-19 will extend to college athletics as well.
We are already seeing cuts to athletic budgets. Several schools in the Mid American conference have already announced that they are cutting some team sports and making other cost saving measures. Western Michigan, Central Michigan and Eastern Michigan have all announced that athletic coaches and staff have had their pay cut.
If the college football season is cancelled or disrupted it is going to have huge ramifications at Division 1 schools since football revenues make up such a large portion of athletic budgets. Schools like Ohio State, LSU and Oklahoma are generating over $100 million of annual revenues from football and that money is funding much of the other athletic programs (men and women) at these universities as well. If that money is not there expect a lot of pain for college athletics in 2020.
College towns like Ithaca, New York, Oxford, Ohio, Athens, Georgia and Boulder, Colorado will suffer great economic pains as well if students do not return to campus this Fall.
The mayor of Ithaca, New York, home to both Cornell University and Ithaca College, recently laid out a grim forecast for his college town.

"If the students don't come back in the fall, we're in real cataclysmic trouble," Mayor Svante Myrick said during an interview with CNBC.

"It's not just pizza shops and it's not just bars. It's not just restaurants. It's barbershops. It's nail salons. It's accountants. It's law firms," Myrick said, according to the news channel. "The ripple effects of all of our students staying home and not coming back to campus, would be crippling."

I continue to be amazed that we are witnessing all of this economic carnage despite the fact that there still remains scant evidence that there is any significant mortality risk to those of college age.
For example, in Ohio there has yet to be one death of anyone under the age of 20. Five deaths for those under age 30. Those under age 50 make up 2% of all deaths. Those over age 80 make up 52% of deaths.
The median age for deaths in Ohio is age 80. How many 80 year olds are frequently on a college campus interacting with students?
The California State University and University of California system, which generally have enrollments of over 770,000 across the state, have already stated they are unlikely to have on-campus classes in the Fall.
In California there has not been one death among any females under the age of 35 and males under the age of 25.
I was curious as to what colleges did during the 1918-19 Spanish Flu pandemic since that virus was much more fatal to the young than the old.
I found an article in my alma mater's student paper that described Miami University's response to the pandemic 100 years ago.

In the fall of 1918, Miami reached what was then the university’s highest enrollment yet — a whopping 905 students.
This increased enrollment was largely due to the newly-founded Students’ Army Training Corps (SATC), which the U.S. Department of War established in all universities that enrolled more than 100 male students. The SATC trained young college students for combat duty, and dozens of Miami students joined the war effort before it ended in November 1918.
Unfortunately for Miami, this promising semester was turned on its head when the Spanish flu hit Oxford in early October of that same year. Half of the students and a third of the faculty fell ill in just a few days.
Shortly after the flu arrived in Oxford, Miami sent all its female students home — aside from a few that remained on campus as nurse’s aides — and returned five weeks later when the virus had sufficiently died down. Male students remained on campus to continue their SATC training.
Though Miami never shut down its campus and still held classes, it placed a ban on large gatherings, canceled some sporting events and closed movie theaters and chapels.

Seven students eventually succumbed to the disease according to the article.
If you think that the Spanish Flu pandemic did not have a major effect on our country consider this chart that I referenced in a blog post in 2013 about how improvements in life expectancy have contributed about as much overall to our overall economic welfare as have improvements in our material wealth over the years.
Economist Kevin Murphy of the University of Chicago puts those longevity gains as being worth an extra $3.2 trillion annually to the U.S. economy.
This is a chart that Murphy shared at a meeting I attended that shows the cumulative value of longevity gains since 1900. Do you notice that enormous downward spike in 1918/19 for both men and women?
This is what I wrote about that chart in 2013.

You might ask what happened in 1918-1919 to set us back so far?  Those were the years of the so-called Spanish Flu pandemic that claimed over 500,000 lives in the United States most of which were healthy, young adults. Worldwide the flu killed 50-100 million.  The cost of these deaths carried a very high economic cost. Who knows what might have been produced or invented by this young talent over their lifetimes?  There is no greater loss than that of unrealized potential.

I also wrote this in the same blog post.

The deaths from this pandemic are also a cautionary tale for the future.  Are we prepared for dealing with something like this again?  It is something we need to be planning for.

Little did I know how correct I was when I wrote that.
What is my my advice today based on all the facts before us?
No school, college or university should be thinking of cancelling classes in the fall.
It is well past time for students to be in school.
It is time to look at the facts and stop committing societal suicide.
Posted by BeeLine at 8:53 PM