The impending vote in Scotland this week on secession from the United Kingdom seems like an opportune time to republish a post I wrote a year ago on similar disruptive possibilities in the United States.

I know that there are many who will undoubtedly say, "It could not happen here". You might want to get a little perspective before you are quick to repeat that statement to someone.

Since The Fourth Turning has been on my mind lately, I will quote another passage from the book that predicts that we are in period where "the American firmament is malleable in ways that would stagger" our traditional thinking.  Howe and Strauss said this about what might occur during The Fourth Turning...

The prospect for great civic achievement-or disintegration-will be high. New secessionist movements could spring from nowhere and achieve their ends with surprising speed. Even if the nation stays together, its geography could be fundamentally changed, its party structure altered, its Constitution and Bill of Rights amended beyond recognition. (emphasis added).


With this in mind, consider these two additional headlines from the past week.


Senate Dems to Hold Vote to Change the First Amendment
Senate Democrats brought to the floor of Senate for a vote a bill to amend the first amendment of the U.S. Constitution to limit free speech by limiting the ability to influence elections.

Pay attention to what happens in Scotland this week. It may be another signal event of The Fourth Turning. Where are we headed? More division? Calls for secession? More aggressive attempts to suppress free speech from those that do not share our individual views?

We all know that there is a lot of political division and unrest across the country. A lot of this seems to stem from a fundamental difference in the outlook and values of those who live in urban settings and cities as opposed to rural areas and towns.

For the last 30 years, those of like minds have increasingly decided to live closer together.  It really is a case of birds of a feather flocking together.

You can readily see the effects of this political polarization by looking at the results of Presidential elections since 1976 as Bill Bishop and Robert Cushing did in their 2008 book, The Big Sort. Consider the differences in voting between 1976 and 2000 as pointed out by Jonathan Last in his book, What To Expect When No One's Expecting.

In 1976, only 26.8% of the counties in America went for either Jimmy Carter of Gerald Ford by a margin of 20 points or more.

In the razor thin race between George W. Bush and Al Gore in 2000 it was not even remotely close in nearly half of U.S counties (45.3%) as either Bush or Gore won by more than 20 points.


Last observes that this "sorting' is not an accident.  People are more mobile today than in years past and they increasingly move to find areas where people have similar lifestyles, attitudes, values and political views.  That is why Arlington County, Virginia has become overwhelmingly Democrat (Obama 69%, Romney 29% in 2012) and Collin County, Texas is overboard for Republicans (Romney 65%, Obama 34%). Arlington is populated by a bunch of young, single, liberal Yuppies. The northern suburbs of Dallas are filled with married couples with families who go to church and like July 4th fireworks displays.

These demographic changes are a big reason that there is so much polarization in our politics today in Congress. Districts are likely to be solidly Democrat or Republican because there is not a lot of diversity of thinking in most locales compared to 35 years ago. Politicians that walk down the middle of the road today get run over by the electorate because of the Big Sort.

This polarization is also showing up in state politics.  For example, twice in the last month I have seen stories about groups that want to form a new state because they are dissatisfied with the representation they are getting in their current state.

The first example is in Northern Colorado. Voters in several rural Colorado counties will be asked in the November elections whether they want to form a new state tentatively named "Northern Colorado".

Establishing a new state by seceding from an old state is permitted under the U.S. Constitution. Article IV, Section 3 requires that the proposal must first be approved by the existing state(s) legislature.  It then must also be approved by Congress.

However, the fact that you need the consent of both the state legislature (who would be giving up land and power) and Congress makes any such effort a long shot.

One of the more interesting historical factoids on this subject involves the state of Texas.  It seems to have special privileges not provided to the other 49 states.  When Texas was being wooed to join the union in 1845 (it was then an independent country), Congress wrote into the resolution granting it statehood that Texas could later slice itself up into two, three, four or even five distinct states without the subsequent approval of Congress. Texas would only need to have its state legislature agree to the split. This clearly was done due to the sheer size of Texas compared to other states at the time.

I always have wanted to write a political thriller based on this little known historical footnote wherein Texas used this power to effectively add eight senators to represent its people in Washington to change the balance of power on a major issue (for example, oil and gas) that was critical to the state. Oh, to find all the time I need to do everything I want to!

There are some that have even gone to the trouble to propose borders and names for what The Five States of Texas might look like. The picture below is from a site called "Fivethirtyeight" which also projected what the county by county face off between Obama and McCain in 2008 would have looked like in the five states of Texas.


Our Founding Fathers also thought that it was possible that two or more states might also be formed by the junction of two or more states, or parts of states at some point in the future.  This has not occurred yet but might it be a possibility if a state found itself in dire financial straits or in bankruptcy?  Could we eventually see state mergers much like corporate takeovers or mergers?  It is allowable in the Constitution.  How about a future in which we have Chicago,Wisconsin or Detroit, Indiana?

The Wall Street Journal had an interesting story several years ago on some of the history of "Altered States" that provides more background about past efforts to establish new states.  It also provided this map of some of the proposed states that never quite made it.  The states of Lincoln (Western Washington and Eastern Idaho), Acadia (Northern Maine) and Chesapeake (Eastern Shore of Maryland) are just a few examples. 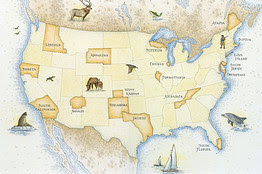 You can go to an interactive map to get details on the background and history of each of these proposed states.

When President Obama was running for office in 2008 he made one of his famous "off Teleprompter" remarks and referred to the fact that he had visited 57 states during the campaign.

All of this shows that he may actually be proven right one day.  At some point we may very well see success from one or more of these state secession efforts.  Its been done in the past.  There is no reason that it might not occur again. I never ignore history.  It may never repeat, but it does rhyme.
Posted by BeeLine at 7:50 PM