Our Immigration System Is Not Broken, Just Its Enforcement

We often hear that "our immigration system is broken".

There are probably not many leading politicians, on either side of the aisle, who have not said it at some point. Obama. Bush. Reid. Boehner. Schumer. McCain. Rubio.

However, I would submit that our immigration system is not broken, just our will to enforce it.

I provided some context on the immigration issue in July in this post. Some of the facts in that post bear repeating.


Byron York takes on the "our immigration system is broken" meme in his Washington Examiner column, "No, Our Immigration System Is Not Broken".

The only problem is, our immigration system is not broken. The part of the system that lets people into the United States is working — not without flaws, of course, but successfully managing the country's immigration needs every day. And while the part that keeps people out of the country, or expels them if they overstay their permission to be here, is not working very well, it's not because the system is broken, but because Congress and the president do not want it to work.

First, the part that lets people in. The United States grants legal permanent resident status — better known as a green card — to about one million people each year. The actual numbers, according to the Department of Homeland Security 2012 Yearbook of Immigration Statistics — the most recent full set of data available — were 1,031,631 in 2012; 1,062,040 in 2011; 1,042,625 in 2010; and so on going back. Legal permanent resident status is what it sounds: a recipient can stay in the United States permanently, and become a citizen if he or she chooses.

"We are the most generous nation on earth to immigrants, allowing over one million people a year to come here legally," wrote Sen. Rubio in 2013. The new million each year come from all around the world, with heavy concentrations in a few places. According to the Yearbook, in 2012, 416,488 came from Asia, while 389,526 came from Mexico, the Caribbean and Central America. That's a lot of the million right there; other sources include 103,685 from Africa and 86,956 from Europe.

Of the total, the vast majority — 680,799 in 2012 — were given green cards because they have family members in the United States. A much smaller group, 143,998, were admitted for employment reasons. The rest were given refugee status, or asylum, or came from the so-called "diversity" lottery.

Under current law — that is, if there is no immigration reform at all — those grants of legal permanent resident status will continue, million after million, year after year, for the foreseeable future. Under the Gang of Eight comprehensive immigration reform bill passed by the Senate last year, the one million each year would increase dramatically, perhaps even doubling to about two million. That's one of the key debates, if not the key debate, about immigration reform: Is it wise to greatly increase the already large number of immigrants admitted to the country each year, especially in a time of high unemployment and economic anxiety?

In addition to all of these legal immigrants who are given permanent residency every year, we also are generous in providing a substantial number of visa for temporary residency in our country. For example, in 2012, the United States granted over 500,000 student visas and 690,000 work visas which included about 135,000 H-1B visas for skilled workers.

However, one of the big problems we have is that by some estimates almost 40% of those that come to the United States on one of these temporary student or work visas overstays their permission to stay. And little is done to go after those that go from "legal" to "illegal" status when they continue to live in the United States after their permission period has expired.

But virtually nothing has been done in all those years, through both Democratic and Republican administrations and Congresses, which suggests that the U.S. does not stop visa overstays because its political leaders do not want to. The Gang of Eight bill includes a new entry-exit system, which would allegedly crack down on visa overstays. Given recent history, however, there is absolutely no reason to believe that would actually happen were the bill to become law. There's also no reason to say the system is broken if the political leadership of the U.S. government is actively preventing it from working.


You begin to see the dimensions of the problem when you look at these three charts prepared from U.S. Border Control data by Walter Hickey of Business Insider.

We are spending almost $4 billion on border enforcement. That is up almost 4-fold since 1990. 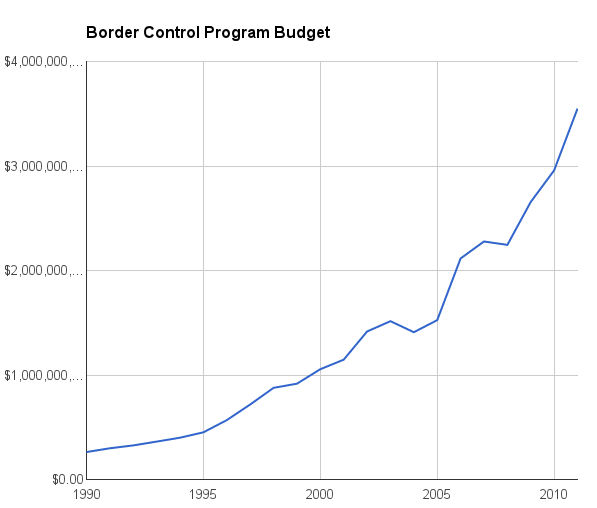 However, apprehensions are only about 25% of what they were in 1990. 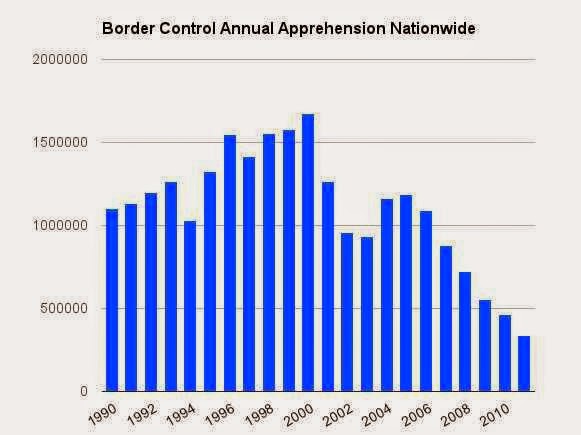 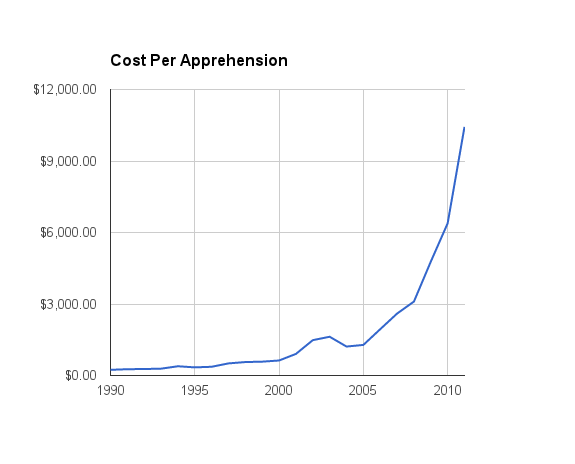 Therefore, why do we keep hearing that the immigration system is broken when you can see from the above that the only thing that is really broken is our enforcement of the system? York provides his take.

So if the system basically works — and in some instances, does not work only because American political leaders don't want it to — then why do we hear so often that the system is broken? Because supporters of comprehensive reform believe that is the best way to convince the public that action is urgently needed. Listening to some of the most zealous reformers, an average voter might never know that the U.S. successfully admits so many immigrants, temporarily and permanently, each year.


And why do many of our political leaders and business interests keep calling for "immigration reform" when they really just want to increase the numbers of "legal" immigrants despite the fact that our economy can't provide enough good paying jobs to native born citizens as it is?

As I stated in my last post on the subject, immigration is not so much an economic issue as it is a political issue. Democrats need the votes. That is all they seem to care about. Corporate interests want to keep wage costs down. The labor unions should be anti-immigration but are more concerned with the success of the Democrat party than their own members. Republicans in Congress are caught between the monied interests who want the cheap labor supply and their rank and file voters who fervently oppose illegal immigration. It is all about political interests and has very little to do with the best interests of this country.