Immigration is in the news with thousands of people (many young children) pouring over what we have been told by our President is a "secure" border.

We strengthened security at the borders so that we could finally stem the tide of illegal immigrants. We put more boots on the ground on the southern border than at any time in our history. And today, illegal crossings are down nearly 80 percent from their peak in 2000.”


There is little question that Barack Obama is the primary reason that an immigration reform bill will not pass Congress this year. He simply cannot be trusted to enforce any law that might be passed as he has consistently shown that he is unwilling to enforce laws that are already on the books.

In addition, if the mere rumor or mention of some sort of amnesty for illegal immigrants has produced the current flood of migrants over our southern border can you imagine what it would be like if some type of amnesty was passed into law?

Against this backdrop we also hear a constant refrain from Democrats and those on the left that we have to be more humane and let more people into this country who suffer from oppression, violence or poverty in their home countries.  However, under this standard, 90% of the people in the world would qualify for entry.

Where do you draw the line?  And where does the United States compare to other countries in providing opportunities for immigrants?  The recent news has increased interest in the immigration topic by many.  But how many know some of the facts behind immigration?

This led me to research exactly how the United States stacks up on immigration compared to other countries in the world. 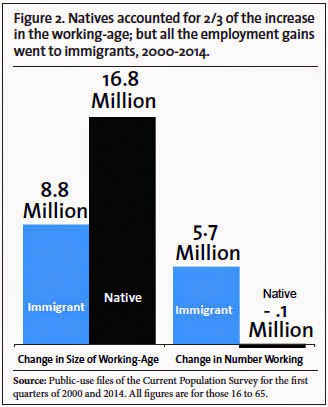 If you look at this data you quickly come to the conclusion that the United States has done (and continues to do) more for immigrants than any country on the face of the earth.

What is truly mind boggling in the data above is the fact that all net jobs over the last 14 years in this country have gone to immigrants. It is astounding to think that there are fewer native-born working age Americans in the workforce today than there were 14 years ago.  In all, there are 17 million more working age natives not working today as compared to what there were in 2000. 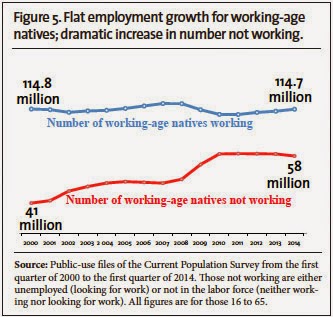 Of course, if that stat is thrown around in front of a liberal Democrat or Wall Street Republican you will quickly hear the familiar refrain that these are jobs that native-born Americans simply do not want to do.  There is truth to that statement.  When tax-free government assistance for a citizen exceeds the pre-tax wage for working you will clearly get many who will choose welfare over work.  People will do what is in their best interest. I don't blame them as I also don't blame people who want to come to this country by hook or crook.

What I do blame is our inconsistent, incongruous and inane policies government policies that lead to these results.  You begin to see what I am talking about when you look at other numbers in the Center of Immigration Studies analysis.

This is a breakout of the potential labor supply of native-born Americans by educational attainment.


You have to wonder what is the economic logic of bringing so many immigrants into the country when we have this much labor supply laying idle? And to also think that a significant portion of this labor supply receives government payments to do so.

Perhaps there is a silver lining in all of this bad news? For example, the headline employment numbers from last week looked positive. This is the headline from Forbes.

However, a closer look at the numbers show that it was not what it was cracked up to be.  In fact, full time jobs plunged by 523,000 for the month. The entire net increase is jobs were part-time positions as shown in this chart prepared by Zero Hedge.

What can we take from all of this?

Immigration is not so much an economic issue as it is a political issue. Democrats need the votes. That is all they seem to care about. Corporate interests want to keep wage costs down. The labor unions should be anti-immigration but are more concerned with the success of the Democrat party than their own members. Republicans in Congress are caught between the monied interests who want the cheap labor supply and their rank and file voters who fervently oppose illegal immigration. It is all about political interests and very little to do with the best interests of this country.

I have written before that I am in favor of immigration reform.  However, I firmly believe that it would have been a gigantic mistake for House Republicans to consider any bill in 2014.

Why have an immigration policy at all? The only logical reason is to improve your country by importing human talent that will provide a benefit to the nation.  This is the thinking that drove our immigration policy for most of our history.  Immigrants with illness or who could not support themselves and their families were turned away.  Often this was at Ellis Island after they had already faced an arduous journey here by ship. Those who were willing to work and contribute to our country were welcomed. Others were sent home. Why should it be any different today?

Why don't we just let everyone in that wants in? What would this ultimately do to employment and pay levels of American citizens?  This is why we need to carefully monitor unemployment rates by industry as part of any ongoing immigration policy to insure that immigrants are not taking the jobs of American citizens or are unduly holding down wage costs.  What about public health and pressures on our infrastructure and institutions?  We can't be a refuge for everyone in the world.

Let's hope at some point the interests of the American people can be balanced with the interests of people who want to come here for the best interests of The United States of America. That would be an interesting development.
Posted by BeeLine at 10:49 PM