The Redistribution of Ohio

For the first 175 years of our country's history, it was generally accepted that the principal roles of government were to establish and maintain justice, insure that people were safe in their homes and on the streets, provide for a national defense and build and maintain public works such as roads, bridges, schools and libraries for the common good.

The focus was almost entirely on the collective and common good and the general welfare. In effect, doing those things that no one individual or small group could effectively do for themselves.

The majority of tax dollars were expended for the benefit of all.

The federal government will spend about $3.7 trillion this year. However, 68% of it will be in direct payments to individuals on spending for Social Security, Medicare, Medicaid and other entitlement programs.

What we would generally consider the traditional functions of government do not make up even one-third of our expenditures at the federal level today. 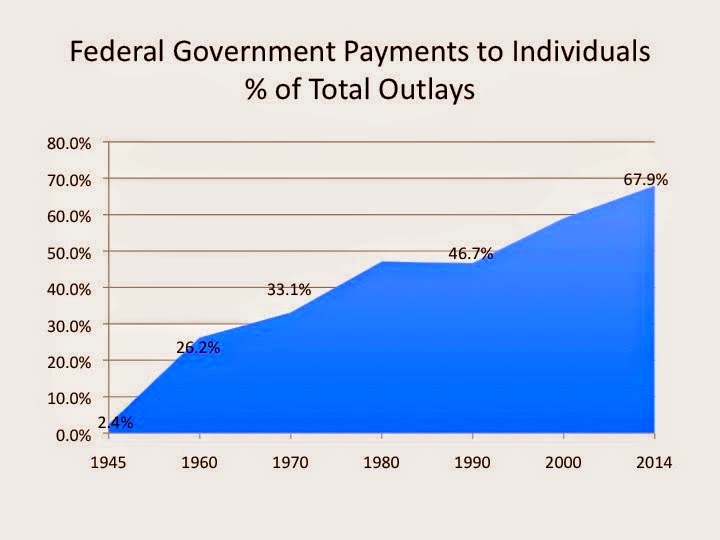 In effect, the federal government has become nothing more than a giant redistribution system in which money comes in at one end from one group of people and it goes out the other end to another group of people with a lot of bureaucracy and built-in bias in between. After all, you need a lot of both to decide who gets and who gives when you are picking and choosing winners and losers. I call it "The Redistribution of America".

The government we have today is far different than what our Founding Fathers thought they were establishing in 1787.  It is also far removed from the government construct for the American people that stood the test of time rather remarkably well for almost 200 years.

It is no different with state government.

I recently took a detailed look at the state budget of my home state of Ohio. I knew the same forces were in play at the state level, however, I was shocked at how far the role of state government has strayed from where most people expect their tax dollars are being allocated and spent.

When I ask most people what they believe the three most important functions of state government are, I usually get these responses.

Accordingly, I think that most people would believe that the three highest priorities for their tax dollars would be in these three areas.

They would be correct if they lived in Ohio in 1970.

In that year, 60% of the Ohio state budget was allocated to these priorities, all of which are expenditures for the common good. Public schools and universities that are for the benefit of everyone. Roads and rail lines that everyone can take advantage of. Parks, libraries, state police, prisons, water supply and sewage and other public services that serve the entire population.

Welfare spending, health care and pensions, all of which take the form of direct payments to individuals, made up 36% of the budget in 1970.

The remaining 4% of the budget was for general government and interest payments. 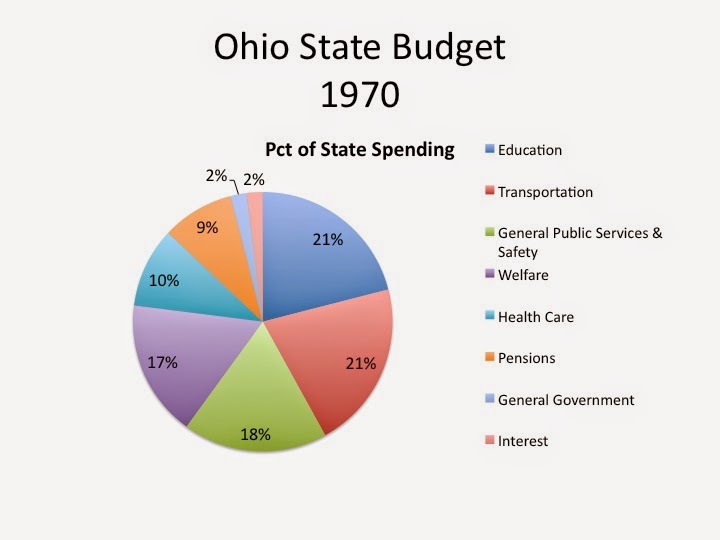 What does the picture look like in Ohio in 2014?

On the other hand, welfare, health care spending (the majority of it going to Medicaid) and pensions consume 79% of the state budget! 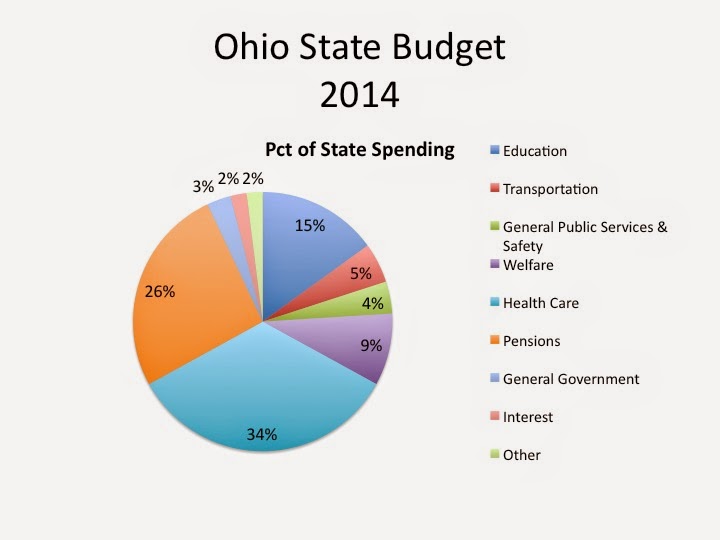 Let me do the math for you.

This spending has effectively crowded out all spending on education, roads, public services and safety. Spending on these priorities in state spending have declined from 60% of the budget to a mere 19%.

We used to believe that the principal role of government was to provide public services. Today it is really about the provision of personal services in payments for individuals with pensions, nursing home and medical costs topping the list.

We are not talking about small amounts of dollars either.

That is a compound average increase in total spending of 7.3% per year.  Inflation over the same period has averaged a little over 4% per year.

To put that in perspective, if state spending in Ohio had merely stayed even with inflation, the state budget would be $16 billion today. Therefore, spending in Ohio today has increased by $42 billion over the rate of inflation in real terms since 1970.

The chart below shows the growth in spending of each of the major categories of state spending in Ohio in relation to inflation since 1970.  The blue column shows spending in 1970. The red column shows what that spending would be today if spending merely increased with inflation. The green column depicts what actual spending is in each category in 2014. 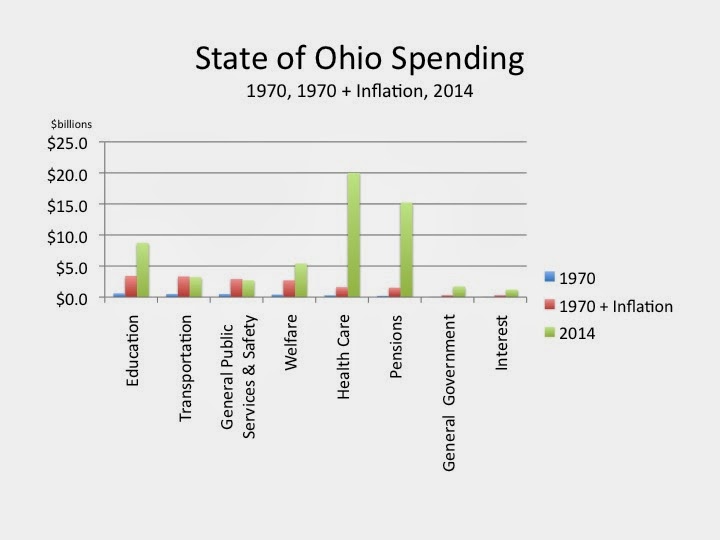 Since 1970, $1 adjusted for inflation, would be $6.14. Therefore, a 6.1x increase in spending would be expected to just keep up with inflation.  Spending in excess of that amount are increases in real spending.


It is truly astounding to take a step back and see what has occurred in Ohio and the United States in my lifetime.

Now you know why I also refer to it as "The Redistribution of Ohio".

We have given up the public interest for the sake of personal interests.

We are taking from the private sector and giving the public sector wage and benefits packages that were long ago deemed unaffordable to those paying the taxes that fund those benefits.

Most importantly, we have massively tilted spending towards the older generation and away from the young in state education funding.

I am sure it is not much different in your state.

If you want to find the budget numbers for your state you can go to www.usgovernmentspending.com which has historical data for all states and the federal government.