Thousands in Europe rally for Palestinians

This was an Aljazeera headline to the story that began this way.

Thousands of pro-Palestinian protesters have marched across Europe, calling on their governments to condemn Israel's military bombardment of Gaza.


Of course, there was no mention in the story that the Israel's military action against Hamas in Gaza was in response to a continual barrage of rocket attacks from that territory.

How many rocket attacks have there been against Israel from the Gaza Strip over the last 13 years?

This is a graphic from the Israel Defense Forces of the number of rocket attacks on Israel from the Gaza Strip since 2001. Bear in mind that the 2014 number is the volume of attacks before Israel took any action. 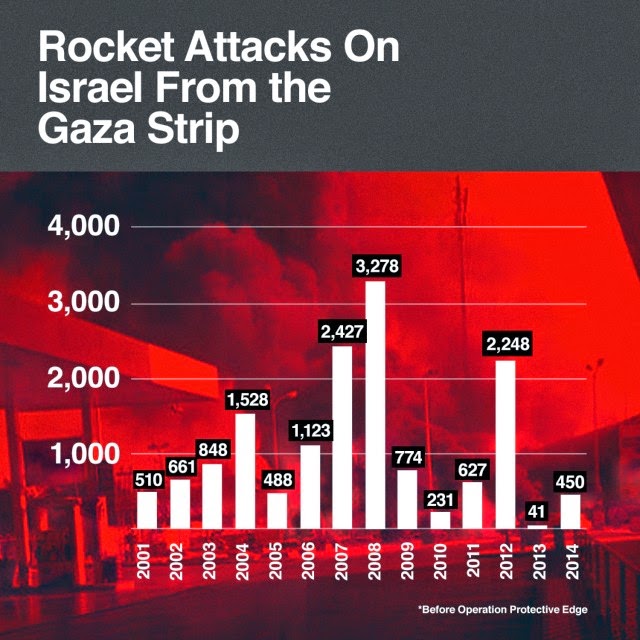 Ask yourself what other country in the world would allow this many rocket attacks and do nothing?

Since Israel responded, Hamas has launched an additional 1,000 rockets at Israel.

The protests in Europe against Israel should not surprise anyone when you consider the fact that there are nearly 44 million Muslims in Europe today compared to 1.1 million Jews.

This is a major factor in the animus towards the United States in the Muslim world and why it is so difficult to engage Europe in an even handed approach in discussions about Israel and the Middle East.

It is not likely to get any better in the future. In fact, it is likely to get much, much worse. Although the overall fertility rate is low in Europe, the Muslim birth rate in Europe is three times higher than the non-Muslim rate. This will feed additional cultural and political divisions across Europe going forward.

With all that is going on between Israel and the Palestinians right now, I thought it was a good time to revisit a post I wrote almost three years ago for some perspective and context on the subject.

We often hear of the plight of the Palestinians and we see the utter hatred of Israel and the Jewish people by Muslims.  Sitting here in the United States it is hard for the average person to figure out what is going on.  I came across three recent stories that provide a little context.

The first is "Debunking the Palestinian Lie" that I found on PowerLine.  We often hear about how Israel has pushed the Palestinian people from their rightful country.  The fact is that they never have had their own country. Their statehood was never even recognized when the Palestinians were part of the Turk's Ottoman Empire.  They were given plenty of opportunities to have their own country over the last 90 years.  They simply refuse to allow the Jews to be anywhere near them and have their statehood as well. They have made it perfectly clear they have no interest if they cannot also obliterate Israel.

View the short video linked in the Powerline story if you are not aware of the history and the multiple times that the Palestinians have been offered their own state.

You might also want to read this story, "A Century of Palestinian Rejectionism" by Fred Siegel, for some historical context.

The third story is a column by Diana West where she writes that "The Jihad is Against the Bible".  Ms. West says make no mistake, it is Israel in which the axis of Islamic Jihad turns.  Why Israel?  West quotes Bat Ye'or's new book "Europe, Globalization and the Coming Universal Caliphate".

Why Israel? Ye'or asks. "Given the immense territories conquered and Islamized over thirteen centuries of expansion and war," she writes, "why would Muslim countries keep plotting to destroy Israel?" And further: "Why does the immense oil wealth of Muslim nations nourish a flood of hatred that poisons the heart of humanity against such a small nation? Why is Israel considered so alarming?"

The well-read global citizen might regurgitate something about land, modern Zionism and the post-1948 "plight of the Palestinians," but these are stock narratives overwriting the age-old reason. "What Israel possesses," Ye'or explains, "is the Bible."

To appreciate the depth and breadth of this perhaps obvious but seldom pondered explanation, it's essential to realize that Jewish and Christian Bible characters, from Abraham to Moses to Jesus, pop up in the Koran as Muslim prophets who actually preach Islam, not Judaism or Christianity. This is the time-wrinkling, religion-morphing way in which Islam repudiates what it regards as falsifications in both the first (old) and second (new) testaments. Given that the Jewish and Christian religious books long predate the Islamic religious book, it's not surprising that in their Koranic guises the biblical characters "wander," as Bat Ye'or writes, "in uncertain space with no geographical or temporal references." Still, Muslims claim that these same "Muslim" characters lived in "Palestine," Bat Ye'or writes, on the basis of the "Jewish and Christian scriptures that they reject."

The land of Israel itself -- whose "every region, town and village is mentioned in the Bible with historical and chronological precision" -- is thus "sacrilegious" to Muslims, she explains. "They observe with destructive rage this unfolding return of history that they claim as their own. ... Any confirmation of the veracity of the Bible is seen as an attack on the Islamic authenticity of the Koranic figures taken from the Bible."

So much for those slivers of real estate as being the driver of war on Israel. It is, in fact, a jihad, a religious war against Judaism and the land of the Bible, root of Christianity. As Ye'or puts it, "Israel, in the land of its history, towns and villages, resuscitates the Bible, the book the Koran must supplant."

The bottom line according to West is that the war on Israel is also a jihad against the Bible and Christianity.  The real story is that Muslims believe that Christians have gone astray by placing themselves in the lineage of the Hebrew Bible when their real origin is Islam.

Getting rid of Israel and the sustaining Jewish roots is seen as necessary to facilitate the Islamization of Christians which is the final goal.
Posted by BeeLine at 10:03 PM