If you are going to run for President its seems that you have to write a book before you start campaigning.

Hillary Clinton has followed the same formula as she seems to be preparing for her campaign for the Democrat nomination for President in 2016. 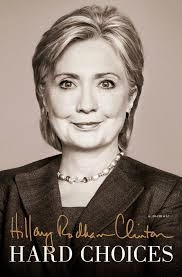 However, Hard Choices has turned out to be a hard sell. It also it must be hard to read. Finally, Hillary has had a hard time of it as she has done interviews promoting the book.

The Washington Post reports just how bad sales have been for Hard Choices.

If you haven't been paying attention, national sales of Clinton's book in hardcover in the first week were well below sales of her biography, Living History (though they exceeded first week sales of other political works). In week two, according to Nielsen BookScan, sales dropped 44 percent. In week three, another 46 percent. And by week four, according to numbers from the Times' Amy Chozick, down another 36 percent, selling only about 17,000 copies.

It also appears that even when people are buying the book they are not reading it.

How would anyone know?  The wonders of modern technology tells us through e-readers.  For example, every time people highlight something in a e-book on a Kindle, Amazon has a record of that.

Jordan Ellenberg, a professor of mathematics a the University of Wisconsin, has developed what he calls a "Hawking Index" which takes that data and correlates them to a page number to estimate when someone stopped reading the book.

The Washington Post took that methodology and applied it to Hard Choices and compared it to other political books.

How far are readers getting when they pick up Hard Choices?  How about page 33?  Of 656 pages. I wonder how good it is as a doorstop? 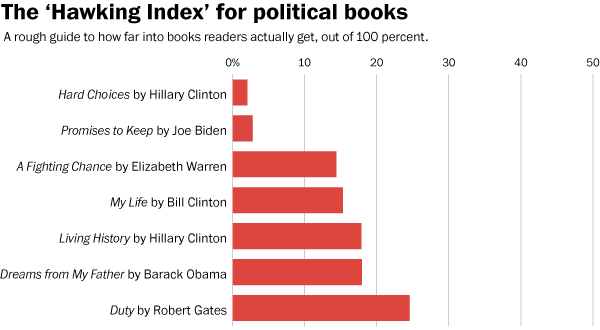 The worst part of the book for Hillary have been her interviews while promoting the books. She has made a number of comments that indicate a level of detachment and tone-deafness that is amazing.

Here are a few.

In an interview on ABC, multi-millionaire Hillary Clinton complained about being too poor to afford her multiple houses after leaving the White House.“We came out of the White House not only dead-broke, but in debt. We had no money when we got there and we struggled to piece together the resources for mortgages, for houses, for Chelsea's education. It was not easy.”
Hillary Clinton, June 9, 2014


Despite reportedly having $100 million in personal wealth, Hillary Clinton claimed she wasn't truly well off.“But they don't see me as part of the problem because we pay ordinary income tax, unlike a lot of people who are truly well off, not to name names; and we've done it through dint of hard work.”
Hillary Clinton, June 22, 2014


Defending her nearly quarter million dollar college speaking fees, Hillary Clinton claimed she was redistributing the money to charity.
“All of the fees have been donated to the Clinton Foundation for it to continue its life-changing and life-saving work. So it goes from a foundation at a university to another foundation.”
Hillary Clinton, July 4, 2014

However, my favorite is the one that I saw today from an interview that she had with Der Spiegel in Germany where Hillary Clinton claimed that she and Bill Clinton were so poor after leaving the White House that they could not get a mortgage.

“We are very grateful for where we are today. But if you were to go back and look at the amount of money that we owed, we couldn't even get a mortgage on a house by ourselves. In our system he had to make double what he needed in order just to pay off the debt, and then to finance a house and continue to pay for our daughter's education.” (my emphasis)
Hillary Clinton, July 8, 2014

Did you notice what Hillary said there?

They had to make double the amount they actually needed to pay down debt, save for a downpayment on a house and save for college.

Why would they need to do that?

You know, that money that federal, state and local governments want to take from you to redistribute to others.  The same taxes that she and her fellow liberal Democrats consistently tell us are not high enough already.

I also like the way she refers to it as if this a unique element of the United States "system" that is completely foreign to the Germans and other Europeans.  As if they are not familiar with high taxes of their own.

She acts as if the Clintons have been singled out in this nefarious system that has two elements-pre-tax and after-tax- that no one else is aware of.

I doubt any hard working Americans are sympathetic.  They have to make hard choices with what is left after taxes every day.

There is one other footnote to this story that played out this week that I found interesting.

The lackluster sales of Hillary's book is well-documented as detailed above.  At the same time, Dinesh D'Souza wrote a book titled "America" that was released a week before Hard Choices.  A movie of the same title hit theaters last Friday.

Therefore, I was surprised to hear Costco announce that they were pulling America from their bookhelves for "slow sales" but keeping Hard Choices in their inventory.

I love shopping at Costco.  I know that the founders are hard-core liberals and big Obama supporters but I always thought they were smart business people as well.  I have written about Costco and their contradictions before.

As soon as I saw the report I went to Amazon to see where each book was on the Amazon Top 100 List.

Here is what I found.

Costco took a barrage of criticism after the story broke and I am happy to report that they have rescinded their order to remove America from their shelves in the wake of what looked like a politically-motivated decision (which Costco totally denies).

As for Hillary, it may be time to start her vacation in the Hamptons a little earlier this year than she planned.  I heard on tv that the place that she is renting on Amagansett will cost about $250,000 for the stay.

More hard work will be required. About 4 speeches should do it.

Or a small fraction of a very big book advance (a reported $14 million for Hard Choices).