In normal times any one  of these stories could stoke a media fire that could burn for months with the Washington media. Especially with a Republican in the White House.

All of these headlines are burning at once but there is only so much oxygen in the room and so much room on the front page. The Border Chaos story is burning the brightest right now (although the shooting down of the Malaysian jetliner has pushed that off the headlines today) but there are a lot of fires burning at once in the background.

In my lifetime I have never seen anything like it. It just keeps coming week after week. Scandals. Incompetence. Insouciance. It borders on the surreal as to how one man could create so much havoc.

Of course, with all of this going on it has been easy to forget about Obamacare. However, it is still there even though it has been knocked off the front page for now. It remains the biggest man-caused disaster of them all.

I thought it would be worthwhile to take a look at the expectations that were established for Obamacare when it was being lobbied for by the President and the Democrats in Congress and what it has actually delivered in results. You might call it a reckoning. How has Obamacare performed compared to how it was supposed to perform?

When Obamacare was being voted on in the Congress in early 2010 the Congressional Budget Office(CBO) projected that is would reduce the number of uninsured by 19 million in 2014.

After the U.S. Supreme Court ruled that portions of the Medicaid expansion provisions in the law were coercive to the states, the CBO adjusted that number down to 14 million.

In February, 2014, after the disastrous launch of the Obamacare exchanges, the CBO revised the number gaining healthcare coverage down to 13 million.

In April of this year, the CBO took the number down again---to 12 million.

The actual number who have been taken off the rolls of the uninsured, according to studies by the Urban Institute and Gallup---8 million!

All of the data above from this article in The Weekly Standard by Jeffrey H. Anderson. 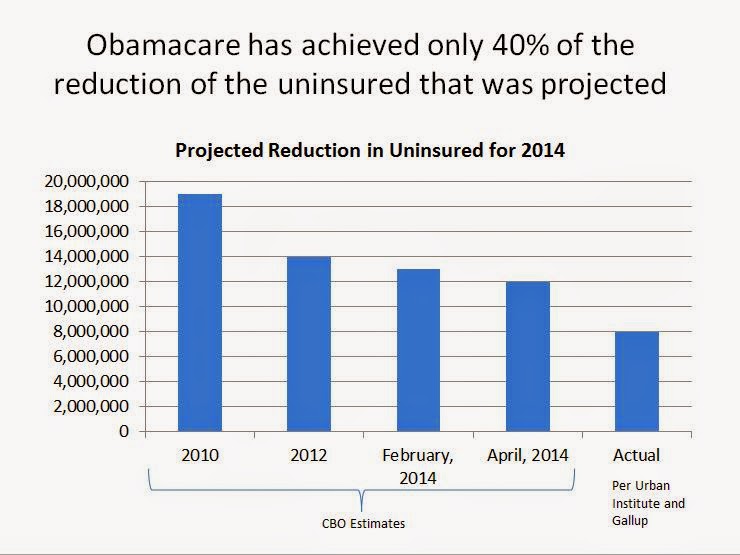 If you are keeping score, that is about 40% of what we were told was the expectation when the law was passed.

What about the cost?

We were told that we could cover 19 million more people for a ten-year cost of $938 billion.

By 2012, CBO was estimating that it would cost $1.677 trillion to cover 14 million (their revised number of the number of uninsured who would be covered under the law).

The most recent CBO estimate is now $1.383 billion. 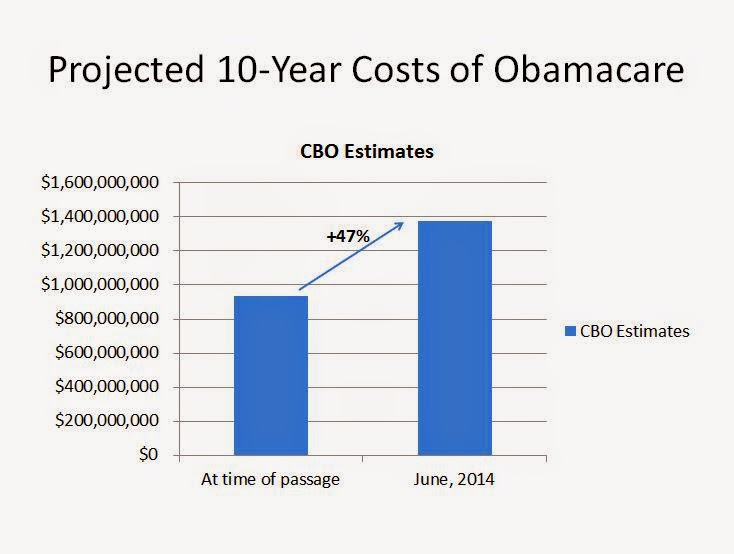 However, the fact is that the enrollments are 40% below expectations and the costs are over 40% above projections.

I guess all you can say is "it's good enough for government work".

When you put the two together you get this chart on the cost of providing government-provided healthcare coverage to each of those taken off of the rolls of the uninsured so far. 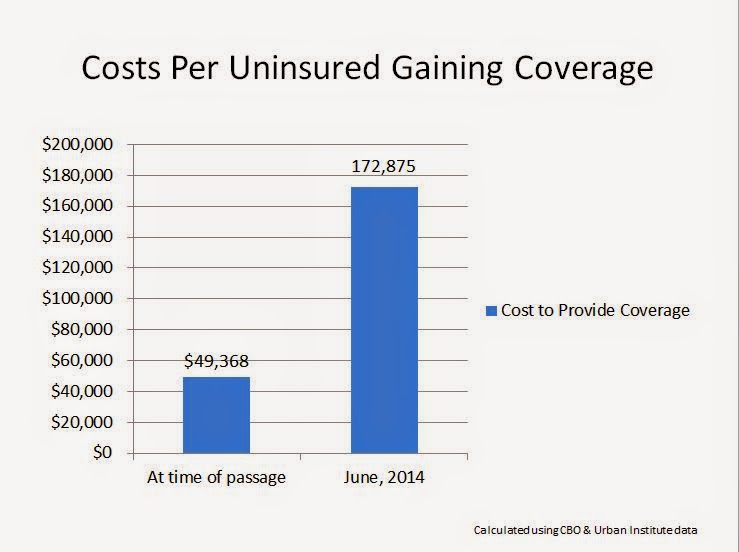 When the law was passed, CBO projections indicated that the cost to provide health coverage for each uninsured would be $49,368 (over 10 years). The cost has now ballooned to $172,875 per uninsured gaining coverage.

Why are costs so much higher than projected?  Start with the fact that individual-market premiums increased an average of 49% under Obamacare according to a study by the Manhattan Institute. Then consider the fact that an estimated 83% of the people signing up for Obamacare in the health care exchanges are eligible for a subsidy. Finally, understand that the average subsidy offsets 76% of total cost of the coverage.

Therefore, Obamacare had the result of dramatically increasing costs in the individual market and then provided federal subsidies using tax revenues to cover the additional costs in addition to the costs that were already not being covered.

So, by and large, all Obamacare has done is dramatically increase (rather than decrease) health care insurance costs in the individual market while at the same time providing subsidies (using tax dollars) to cover the newly inflated costs to create more people who are dependent on government for their needs.

At the same time, they have made the individual health insurance even more unaffordable for anyone who does not qualify for subsidies. That is the reason that all of the waivers and exclusions to the law have been provided by the Obama administration. That keeps the real facts from the people and out of the headlines until after the next election when those rules will be enforced under the law.

It is just too inconvenient for Democrats for President Obama to enforce the law that he advocated for and signed right before an election right now.

There will be a bigger day of reckoning on Obamacare . When will that be?

Is it going to be when everyone finally realizes what Obamacare is really all about after all the Presidential deferrals, deferments and delays are over?

However, if people are paying attention it should be in this November's election and those that will be subject to the reckoning are the Democrats who created this monstrosity. If not, the hard-working people who have to pay the bills in this country will lose again.

The people's power is absolute in our system.  Unfortunately, too many people don't believe it. Laws that do not have public backing do not survive over the long term. Lawmakers who make laws that people do not support do not stay in office.

Politicians have no power unless the people provide it. It is that simple.

We can complain about Barack Obama, Harry Reid or Nancy Pelosi. Throw in John Boehner or Mitch McConnell as well if you want to. The voters gave them the power they have. Throw out Eric Cantor. The people took away his power. It can and does happen when the people exercise their power.

Are the American people ready to reckon? It is in their power to do so.