Midway To The Midterms

The midterm elections are six months away.  It will be interesting to see how things play out.  The Republicans look like they have a lot going for them right now.  Midterm elections are often looked at as referendums on the current President. That does not bode well for Democrats where we sit today. President Obama's poll numbers have been suffering. A Washington Post-ABC poll released a few days ago had Obama's approval rating at a record low of 41%. 52% disapproved of the President's performance. Even worse, there was an 11-point Democratic advantage in the poll sample.

There are also 36 Senate seats up for election in 2914. The Republicans also have the advantage of only having to defend seats to 21 for the Democrats.  Seven of the states that Senate Democrats are defending went for Romney in 2012 but only two of the Republicans states went for Obama.

Republicans would seem to be in a great position for these midterms but when you are the minority party in Washington and you are not communicating with a single, unified voice, potential trouble looms with the electorate.

That certainly is the case right now.  Consider the fact that the Republican leader in both the House (Speaker John Boehner) and the Senate (Minority Leader Mitch McConnell) are each being challenged in primary elections.  This is almost unprecedented and shows that Republicans have a lot of work to do in getting the votes necessary to gain control of the Congress this year.

I have explained my view on elective politics before. Most elections are won with a combination of personality and simplicity, especially at the national level.  Voters inevitably simplify elections into "yes" or "no" or "for" or "against" and it often involves one big issue that they feel strongly about.  Voting, like most other human decisions, is based more on emotion than analysis.

The biggest midterm election margins have been in years in which one overriding issue was in front of the electorate.

In 1974 it was Watergate and President Ford's pardon of Nixon.  The Republicans lost 48 seats in the House and 4 in the Senate.

In 1994 it was push back to the Clinton agenda (including Hillarycare) and Newt Gingrich's smart and countermove with the "Contract with America" which simplified the election for the voters.  The result-Democrats lost 54 seats in the House (including Speaker Tom Foley) and 8 seats in the Senate.

In 2010 Obamacare was the rallying point.  63 Democrat seats were lost as were 6 Senate seats.

As I pointed out shortly after the 2012 election, Obama won in 2008 and 2012 because his people showed up.  Democrats lost in 2010 because the same voters did not show up. 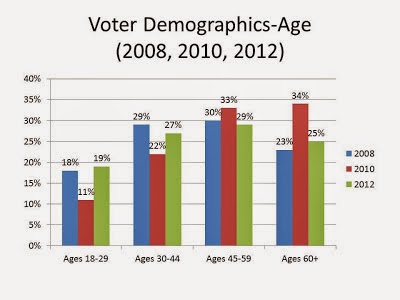 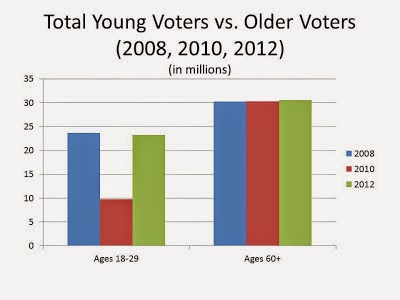 There are some in the Republicans ranks who are arguing that it is time to accept Obamacare is the law of the land and it makes no sense to keep beating a dead horse.

There may be truth to that from a policy perspective but that is totally wrong from a political perspective.  The polls indicate that it still is a very powerful emotional issue with voters (especially those who are opposed) and it remains the one issue that will get people to turn out to vote.

And although it might make sense for Republicans to be looking for ways to "fix" or "amend" Obamacare from a policy perspective, that position has no legs politically.  People vote "yes" or "no", they don't vote to fix something when they are not sure what the fix is.

There is only one position for Republicans to run on with regard to Obamacare and that has to be repeal.  It may not be realistic but that is the reality of electoral politics.  After all, there is no chance for Republicans to even get a chance to fix it unless they control both houses of Congress.  The Democrats are hunkered down are not going to give any fix a chance no matter what the form with Harry Reid controlling the Senate.

My advice to Republicans is simple. Obamacare is a gift horse, not a dead horse.  Don't spend time talking about fixing it, keep talking about getting rid of it.

The other issue that could undermine Republican chances in November involves immigration.

I have written before that I support immigration reform in what I refer to as a "red card" program.  However, there is absolutely no reason on earth that the Republicans should be supporting any immigration reform proposal at the current time.

First, there is no way that Obama and the Democrats could be trusted to enforce the necessary border security and enforcement provisions that would be necessary to insure that any legislation that passed would improve the current immigration situation.  Second, it would be a political disaster of epic proportions for the Republicans leading up to the 2014 midterm elections to do anything with immigration.

The Democrats would get all the political benefits from the legislation as well as energizing their dispirited base.  At the same time, hard core Republicans would turn away in droves from the party and their support of Republicans at the polls this year.  Anger with Obamacare would be a distant memory if the Republican leadership in the House were stupid enough to put an immigration reform bill up for a vote this year.

If the Republicans are looking to gain some advantage with the changing demographic forces that are making the Hispanic vote stronger by the year, it only makes sense to craft and pass an immigration reform measure when Republicans are in control of both Houses.  To do anything else is the equivalent of committing political suicide, especially when Obamacare remains the political gift it is.

My advice to Republicans on immigration reform is also simple.  Wait until next year.  There is absolutely nothing to gain by doing it this year and much, much to lose.