A Loss of Appetite

For whatever reason I have been writing about food recently.  First, food stamps and then how the increased access to fast food has caused us to get both taller and wider as the years pass.

Today I came across another food story via the Viable Opposition blog that seems to tie my other two posts together pretty well.

It seems that back in 1980 the U.S. Department of Agriculture (USDA) put together a series of dietary recommendations for Americans age 2 and over in order to assist in maintaining a healthy weight as well as preventing the development of chronic diseases caused by poor diet.

Last year the federal government followed up to see how the American people were actually following the recommendations. I doubt you are going to be shocked at the result of those studies.

This is how Viable Opposition reported the story.

Economic Research Service (ERS) researchers, the body that provides research and economic information from the United States Department of Agriculture, undertook two studies that looked at how much consumers were spending on healthy choices and unhealthy choices as outlined above over the years from 1998 to 2006. Households recorded their food and beverage purchases of over 60,000 different products into the 23 USDA food plan categories with the beverage group consisting of all soft drinks and fruit drinks, the processed products which include dairy products, soups, frozen or refrigerated dinners and refined and whole grains and fresh or minimally processed products like frozen beans and canned tomatoes.

Now for the graphic showing the results of average at-home household spending on each of the 23 food categories (in blue) compared to the USDA recommended level of spending (in yellow). 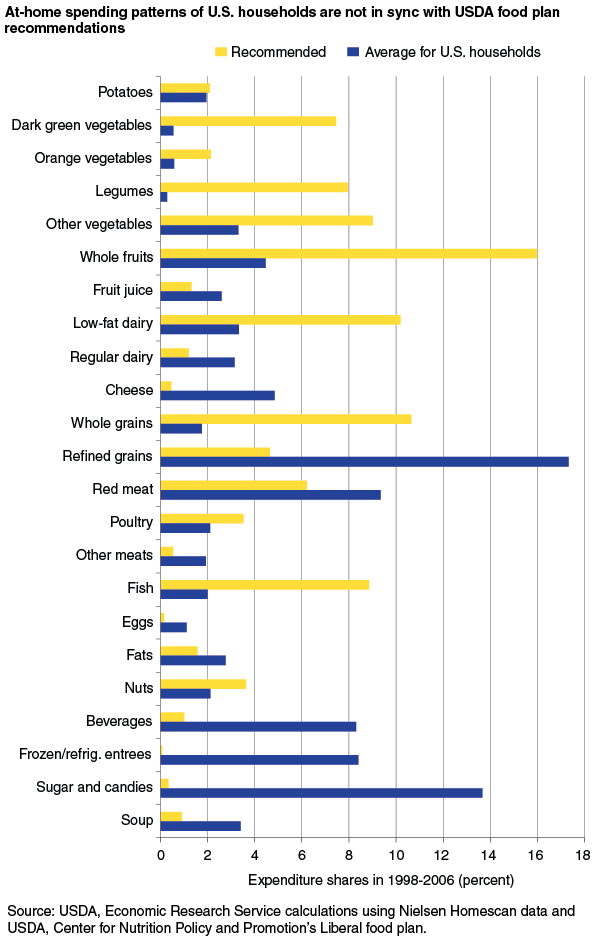 In looking at the results we can see that U.S. households are doing the exact opposite of what the USDA recommended in almost every instance.

For example, the USDA recommends that about 40% of household food plan spending should go for vegetables, legumes and whole fruits.  Actual spending on these items is less than 10%.

The USDA recommends spending about 3% of the monthly budget on beverages, frozen entrees, sugar, candies and soup.  Actual spending on these items is over 1/3 of the typical household food budget.

You can see the effects of the increased accessibility and availability of food by the tremendous increase in the amount of calories consumed through fast food. In the late 1970's fast food only accounted for 3% of the calories of the American diet.  That number has increased over 4-fold since that time. 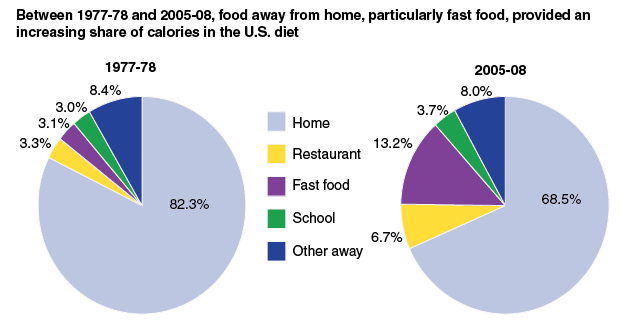 You might look at this and think that money has something to do with these choices.  After all, fresh fruits and vegetables are more expensive than a lot of the junk food.  However, the studies found no real differences in the mix of household food spending across income levels.

What remains difficult to understand is on the one hand you have the federal government providing recommendations for what people should have in their diets to maintain a healthy weight and avoid long-term chronic diseases.  However, on the other hand, they are handing out taxpayer money to almost 50 million people on food stamps to purchase whatever they want with almost no restrictions.

Both sides of this are being managed and administered by the U.S. Department of Agriculture which tells us that trying to limit food stamp purchases to select categories of food would be complex to be workable.

However, if it was not workable how was the USDA able to figure out how to change the rules for what can be purchased by schools for the school lunch program as a result of "The Healthy Hunger-Free Kids Act" that was signed into law in 2010?

Consider this report from The Washington Times on the new school lunch rules.

The new standards are exhaustive, including calorie ranges for each age group, sodium limits, zero tolerance for trans fats, and specific ounce amounts for meats and grains. White bread will be mostly phased out beginning in 2014 because only “whole grain rich” items will be allowed.


The school lunch rules have also meant that many school districts have had to buy new silverware and cookware to meet the USDA requirements.

Lunchroom costs are also going up due to the need for “new spoons and ladles to match the new portion size requirements.” Thirty-one percent of SFAs nationwide said they needed additional kitchen equipment to comply with the new lunch requirements last school year.


What also made little sense was that the rules mandated that school lunch prices had to be increased with the result that kids who pay full price for school meals actually declined by 10% due to additional federal subsidies that were given.  Only 30% of students today pay the full price for their school lunches. Over 60% are receiving free lunches and the remainder get partial subsidies.

That sounds a lot like Obamacare.  First raise the cost on everyone but then provide a subsidy so that there are that many more people who are dependent on the government's taxpayer's largesse.  Yet another example of the Redistribution of America right out of the Obama liberal playbook. 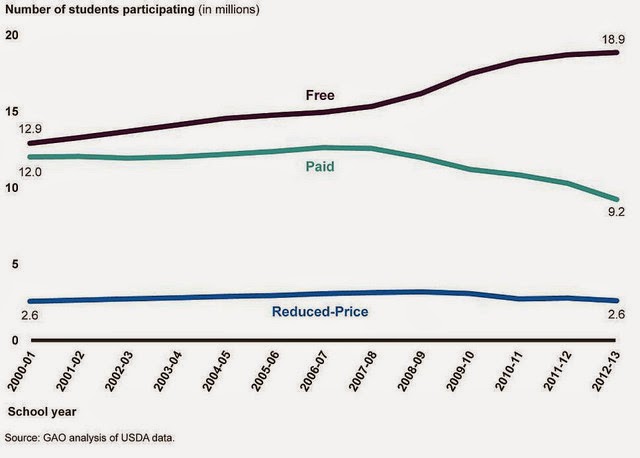 In Detroit, 78% of school children qualify for free lunches. Three years ago I wrote about the USDA pilot program there that allowed all of the students in the Detroit Public School System to receive free meals irrespective of income. That is a total of 66,000 students. What was the logic behind that?  The USDA says that it is giving rich kids free food so that the poor kids don't feel bad in getting the free food!

“We’ve worked very hard to reduce the stigma,” Aaron Lavallee, a U.S. Department of Agriculture spokesman, told the Detroit News. “We’re seeing a lot of working-class families who’ve had to turn to free school meals to feed their children.”


“Now all students will walk through a lunch line and not have to pay,” says Mark Schrupp, Detroit Public Schools COO. “Low-income students will not be easily identifiable and will be less likely to skip meals.”


It seems to me that the only people with hurt feelings would have been the 1 in 5 parents who were paying for school lunches for their kids before they ended up with the free lunch.

I guess this also goes to show you that, despite what you have heard, there really is a free lunch!

I don't know about you but all of this is enough to make me lose my appetite.
Posted by BeeLine at 9:15 PM