I was in an historic building recently and couldn't help but notice how small the elevator was. The design of elevators in the 1920's were clearly meant for humans that were much smaller than we are today.  From both horizontal and vertical perspectives. 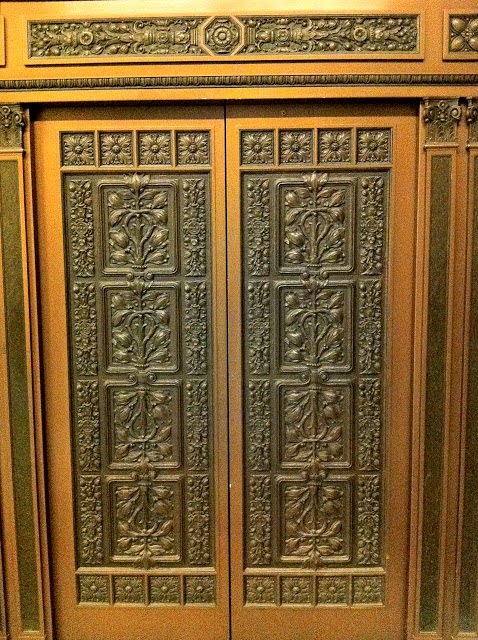 We all know that we are getting heavier.  The average weight for males between the ages of 20-74 has increased from 166 lbs. to 191 lbs since 1960. The average weight gain for females has increased ffrom 140 lbs. to 164 lbs over the same period. The weights of children have also increased as detailed in this report from the Center for Disease Control. This data is over a decade old so these numbers might actually be "light" today. (Update: these are light. 2012 CDC data reports that average male weight is 196 lbs with women at 166 lbs. Men have average waist size of 39.7 inches and women 37.5 inches.)

Look at these group photos from the 30's, 40's and 50's. How many overweight people do you see? Compare those images to what you see on the street today and you can understand why those old elevators are a little crowded these days.

The CDC report also notes an increase in height of about an inch for both men and women since 1960. This is consistent with another study from the U.K. that found that average heights of males had increased by four inches in the last hundred years. In research using British military records, it was found that the average 20-year recruit had increased in height from 5'6" in World War I to 5'10" today. Similar increases in heights have been noted in other Western countries.

Tim Hatton of the University of Sussex poses the question in a Live Science op-ed, "Why Did Humans Grow Four Inches In 100 Years? It Wasn't Just Diet".

Hatton points out that this gain in height is unprecedented in recorded history where there are reliable records of average heights going back to the middle ages.

The most obvious answer for the increase in heights is better nutrition. However, this does not appear to be the sole answer.

The 20th century saw dramatic improvements in diet. The quantity of food intake increased and its quality improved, as incomes rose faster than ever before. But in some countries economic historians have found that during the early stages of industrialisation average heights fell at the same time as income

per capita increased. The most debated case is the US in the three decades before the civil war – this has become known as the “antebellum puzzle”. So income and height don’t always move in lockstep. But, as in earlier times, the correlation between trends in height and income is far from perfect.


The reduction in infections is cited by Hatton as another likely reason.

Something else is at work: exposure to infection. Repeated infection during infancy and childhood slows growth as nutrition intake declines or is used by the body to fight disease. Predominant among these illnesses

The key factor here is the urban environment. Sanitary reforms improved the quality of water supply and the disposal and treatment of sewage. In urban districts horses disappeared from the streets and pigs from backyards. Equally important was the reduction in overcrowding and improvement in the quality of housing, as the slums were gradually cleared.

There is another factor that may be at play here that Hatton does not mention. I am not so sure that hard, physical labor by children on the farm is particularly helpful when children are in their growth years.  It may have some effect on their growth plates. And there were a lot of children doing a lot of work on farms 100, 75 and 50 years ago.

Family income and number of siblings also seem to be factors.  Children born to higher income families and those with fewer siblings are taller.  In other words, nurture may be a significant factor beyond just nature (DNA makeup) in height.


By tracing their families in the 1901 census we can also see the household circumstances of the servicemen when they were growing up. This reveals that those from middle class families were taller and those with more siblings were shorter. The latter reflects a trade-off between the quantity of children and their average quality in terms of health. This too was a source of height gain, as average family size fell from five in Victorian times to just two by the 1930s.

What about the weight gain? That is much easier. There is clearly much more food available. However, most importantly in my mind, it is much more accessible.  Fast food was not available on every corner nor were there many pre-packaged ready to eat meals when I was growing up fifty years ago.  I did not step foot into anything like a McDonalds until I was well into my teens. Eating simply used to take a lot more work in the past to plan it, prepare it and consume it.

However, our weight gain issues are not solely related to availability and accessibility but may also be a result of a calorie distribution problem within our bodies.  David Ludwig and Mark Friedman posit in the New York Times that it is not overeating and too many calories that is the problem but our calories are going to the wrong place in our bodies.

More of us than ever are obese, despite an incessant focus on calorie balance by the government, nutrition organizations and the food industry.

The more calories we lock away in fat tissue, the fewer there are circulating in the bloodstream to satisfy the body’s requirements. If we look at it this way, it’s a distribution problem: We have an abundance of calories, but they’re in the wrong place. As a result, the body needs to increase its intake. We get hungrier because we’re getting fatter.


Ludwig and Friedman's thesis is that highly refined and rapidly digestible amounts levels of carbohydrates enter the body and are converted to insulin which attaches to fat cells rather than entering the bloodstream to be used as energy. These calories are not burned to fuel the body but are locked in storage in the fat cells.  That means that there are not enough calories in the bloodstream to fuel the body and you remain hungry and eat even more.

They back this up with a recent research study in which young adults on various low fat and low carb diets consumed the same number of calories but different distributions of carbs, fats and protein. However, subjects burned about 325 more calories per day on the low carbohydrate than on the low fat diet — amounting to the energy expended in an hour of moderately intense physical activity.

This tracks my own experience. When I have cut back on soft drinks, candy, refined sugars, potatoes, pasta and breads I have noticed consistent weight loss.  I have also found that I am generally am not as hungry when I am limiting carbohydrates.  This is despite the fact that carbs have about half the calories per gram as fat does. Therefore, weight control and the fight against obesity may turn more on diet quality and distribution than caloric intake.

This is how Ludwig and Friedman sum it up.

People in the modern food environment seem to have greater control over what they eat than how much. With reduced consumption of refined grains, concentrated sugar and potato products and a few other sensible lifestyle choices, our internal body weight control system should be able to do the rest. Eventually, we could bring the body weight set point back to pre-epidemic levels. Addressing the underlying biological drive to overeat may make for a far more practical and effective solution to obesity than counting calories.

I don't know about you but I am happy to have the extra four inches.  After all, that alone allows me to eat more than my ancestors. You would think that it would be easy to maintain a respectable Body Mass Index (BMI) with those extra four inches of height to spread the weight around.  However, as we all know, it is not easy.

Think about diet quality and distribution and don't just diet by tracking calories.  I believe Ludwig and Friedman and others who have looked at the effect of carbohydrates in your diet are on to something. It will interesting to see where further research leads us.