Two headlines caught my eye recently but it was not until today that I understood how they were interconnected.

This is how the The Washington Post reported the economic news.

The nation's gross domestic product expanded at a meager 0.1 percent annual rate in the first quarter -- well below the forecasts for 1.2 percent growth. The slowdown reflected weaker exports, a decline in business investment and cuts in state and local government spending, among other things. The recovery was propped up by strong consumer spending, driven in part by health-care spending after the implementation of the Affordable Care Act.


.1% economic growth? That is just a hair's breadth away from Recession territory!

USA Today reported it this way.

Health care expenditures climbed at a 9.9% annual rate last quarter, mostly because of increased spending at hospitals, the Bureau of Economic Analysis said last week. That's the biggest jump since 1980's third quarter, and it followed a 5.6% increase in the fourth quarter.


This chart from advisory.com puts both numbers in context and it is not pretty on either the GDP score or what has happened to health care costs. This chart covers quarterly changes in GDP and health care spending over the last 10 years.

This chart from Business Insider shows the annualized quarterly change in health care spending going back to 1980. 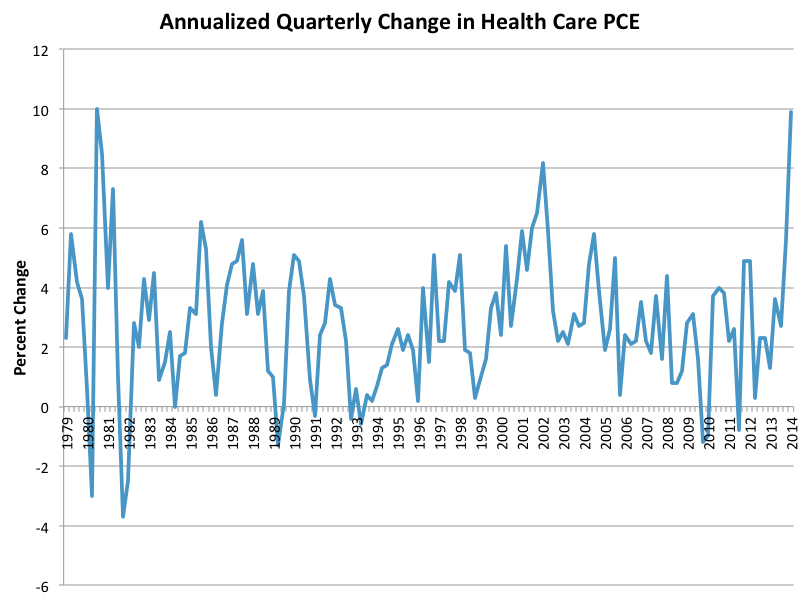 However, what I really found interesting were these observations about the interplay of the GDP and health spending numbers in the Business Insider article by Ian Shepherdson, chief economist for Pantheon Macroeconomics.

"Personal consumption grew by 3%, about half of which was due to the growth in healthcare spending."


That is pretty sobering.  Half of the growth in personal consumption in the first quarter was just for health care spending?  But the real kicker for me was this additional quote from Shepherdson.

"If health-care spending had been unchanged, the headline GDP growth number would have been -1.0%."


That is nothing short of mind boggling.
A recession is generally defined as occurring when there are two consecutive quarters of negative GDP growth.  This data suggests that the only reason that we did not have falling GDP growth in the first quarter is because of the effects of Obamacare on health care spending.

What have we become if health care spending is the main driver of the American economy?  That is where we were in the first quarter.

Will we soon see the Affordable Care Act with yet another name since the Democrats no longer like to call it Obamacare?

The way the Obama machine spins the news I would not be surprised if we soon start hearing about the "The 2014 Economic Recovery Act".

Don't laugh. If they could blame Benghazi on a video while keeping a straight face, claiming that Obamacare is the engine behind our economy ought to be no problem at all.
Posted by BeeLine at 9:55 PM