One Place The Food Police Are Needed

However, the number of people on food stamps has skyrocketed over the past five years and there seems to be no interest in policing that food.

An average of 47.6 million people received food stamps each month during 2013.  That compares to 26 million when President Obama took office just over five years ago.

What is amazing is that there are now more people on food stamps than the number of women working full-time, year-round jobs.

To put that 47.6 million in further context, consider the fact that Barack Obama only had 62.6 million votes cast for him in the 2012 election.  Therefore, if every food stamp recipient voted for Obama that alone would be 76% of his total vote tally by itself.

The food stamp program was originally designed to help those who were dealing with economic hardship to have the opportunity to purchase a "low-cost, nutritionally adequate diet".

Note the key words there. "Low cost and nutritionally adequate".

With that background I read with some distress the following report on the food stamp program (officially known as the Supplemental Nutrition Assistance Program "SNAP") by the Malbeck Data Institute that found that 89% of food stamp purchases were for "unhealthy, overpriced convenience store junk food". Only 11% of welfare recipients were using their food stamps for basic ingredients for healthy meals.

I could not find any evidence of the Malbeck Data Institute in a Google search or the actual study. Therefore, I would question the source and the validity of the data.  However, even if the report is nothing but an urban myth there is little question that the food stamp program is in need of fundamental reform.

In the name of a low-cost, nutritionally adequate diet how come the taxpayers end up paying for Twinkies, Twizzlers, Cheetos and Mountain Dew?

We are not talking about an insignificant sum of money.  The food stamp program is now costing in excess of $80 billion per year.  That ought to feed a lot of hungry people. For context, that is more money than is collected in income tax on all 43 million tax returns with adjusted gross incomes of less than $50,000.

Decades ago, William F. Buckley wrote a piece in which he suggested that we could make sure no one in this country went hungry by providing four basic food items for free to anyone who wanted them. Skimmed milk, bulgur wheat, beans and lard would be stocked in bulk in every grocery store in America under his plan. He saw no sense in policing it once it was stocked figuring if someone took these items they really were hungry. No frills to be sure but it would get the job done with a fraction of the cost and bureaucracy of the food stamp program.

I am not suggesting anything so draconian but it seems that something is amiss. When someone can go into a grocery store and purchase caviar, crab legs and cashews with taxpayer money, and most of the taxpayers footing the bill would never think of buying these with their own money, we should be rethinking our approach. I have seen or been told stories of each of these purchases over the years as most of us have.

Any yet, nothing ever changes. More people get the stamps (replaced now with an EBT card) every year and the costs go up every year. 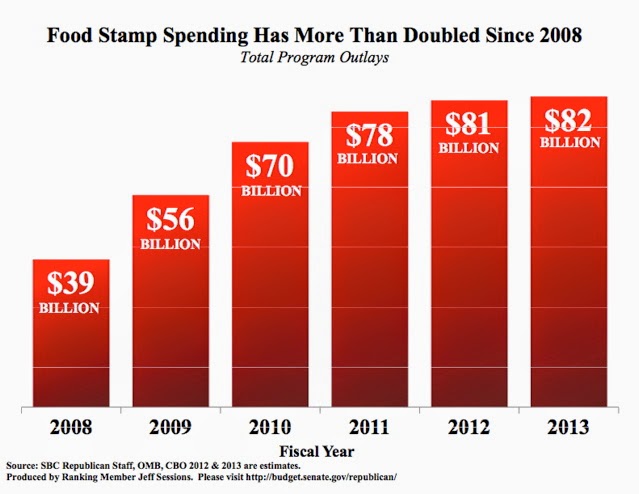 The U.S. Department of Agriculture, which administers SNAP, is adamantly opposed to placing any restrictions or limits on the current rules for food stamps.

For example, self-appointed soft drink policeman Mayor Michael Bloomberg asked the USDA three years ago to authorize a pilot program in New York City to exclude soft drinks from food stamp eligibility. At least, he was consistent in his food police activities. However, the USDA stated that the experiment would be "too large and complex" to implement and evaluate.

Bakery cakes, cookies and candy are all eligible purchases for food stamp recipients. In fact, most everything that is edible in a grocery store is eligible under the food stamp program except for hot, prepared meal items. Cigarettes and alcohol are excluded but someone can buy the caviar and crab legs and sell them for .50 on the dollar to someone else, take the cash and do anything they want with it (like buy their tobacco and beer).

In Appalachia, selling black market pop purchased with EBT funds is a fundamental driver of the local economy according to this report by Kevin Williamson in National Review Online.

It works like this: Once a month, the debit-card accounts of those receiving what we still call food stamps are credited with a few hundred dollars — about $500 for a family of four, on average — which are immediately converted into a unit of exchange, in this case cases of soda. On the day when accounts are credited, local establishments accepting EBT cards — and all across the Big White Ghetto, “We Accept Food Stamps” is the new E pluribus unum – are swamped with locals using their public benefits to buy cases and cases — reports put the number at 30 to 40 cases for some buyers — of soda. Those cases of soda then either go on to another retailer, who buys them at 50 cents on the dollar, in effect laundering those $500 in monthly benefits into $250 in cash — a considerably worse rate than your typical organized-crime money launderer offers — or else they go into the local black-market economy, where they can be used as currency in such ventures as the dealing of unauthorized prescription painkillers — by “pillbillies,” as they are known at the sympathetic establishments in Florida that do so much business with Kentucky and West Virginia that the relevant interstate bus service is nicknamed the “OxyContin Express.” A woman who is intimately familiar with the local drug economy suggests that the exchange rate between sexual favors and cases of pop — some dealers will accept either — is about 1:1, meaning that the value of a woman in the local prescription-drug economy is about $12.99 at Walmart prices.


The USDA says that it is too complicated to try to segregate food items but the federal government requires that chain drug stores and pharmacies code what is eligible for FSA and HSA accounts in their inventory systems.

Why can't we limit food stamps to low-cost, nutritionally adequate food items? Especially when the taxpayers are paying the bill?
Posted by BeeLine at 6:55 PM