On my first trip to Washington, DC over fifty years ago I visited many sites during a week-long trip ---the White House, the Capitol, the Lincoln Memorial, the Jefferson Memorial, the Smithsonian, Mount Vernon, Arlington Cemetery, Ford's Theatre.  However, my favorite tourist stop was the U.S. Bureau of Engraving and Printing.  The place where they print all that green stuff.


It was dazzling for a 12-year old to see those big sheets of dollars go through the printing press and then see those sheets stacked high on palettes.  You could literally smell the money.

I subsequently took my own children to see the money printing presses running and stopped by on my own a few years back when I had several free hours to kill while I was in D.C.  It still is an amazing place to visit.

You might ask why am I reminiscing about the Bureau of Engraving and Printing and my childhood travels when there is so much I could write about on this fine day?

It was this chart that I saw today while reading Grant Williams' newsletter, "Things That Make You Go Hmmm..."  which shows exactly how much currency printing the Bureau of Engraving and Printing has been doing lately. I thought all the "money printing" that we hear about was just limited to some computer entries at the Federal Reserve?  How do you reverse this? 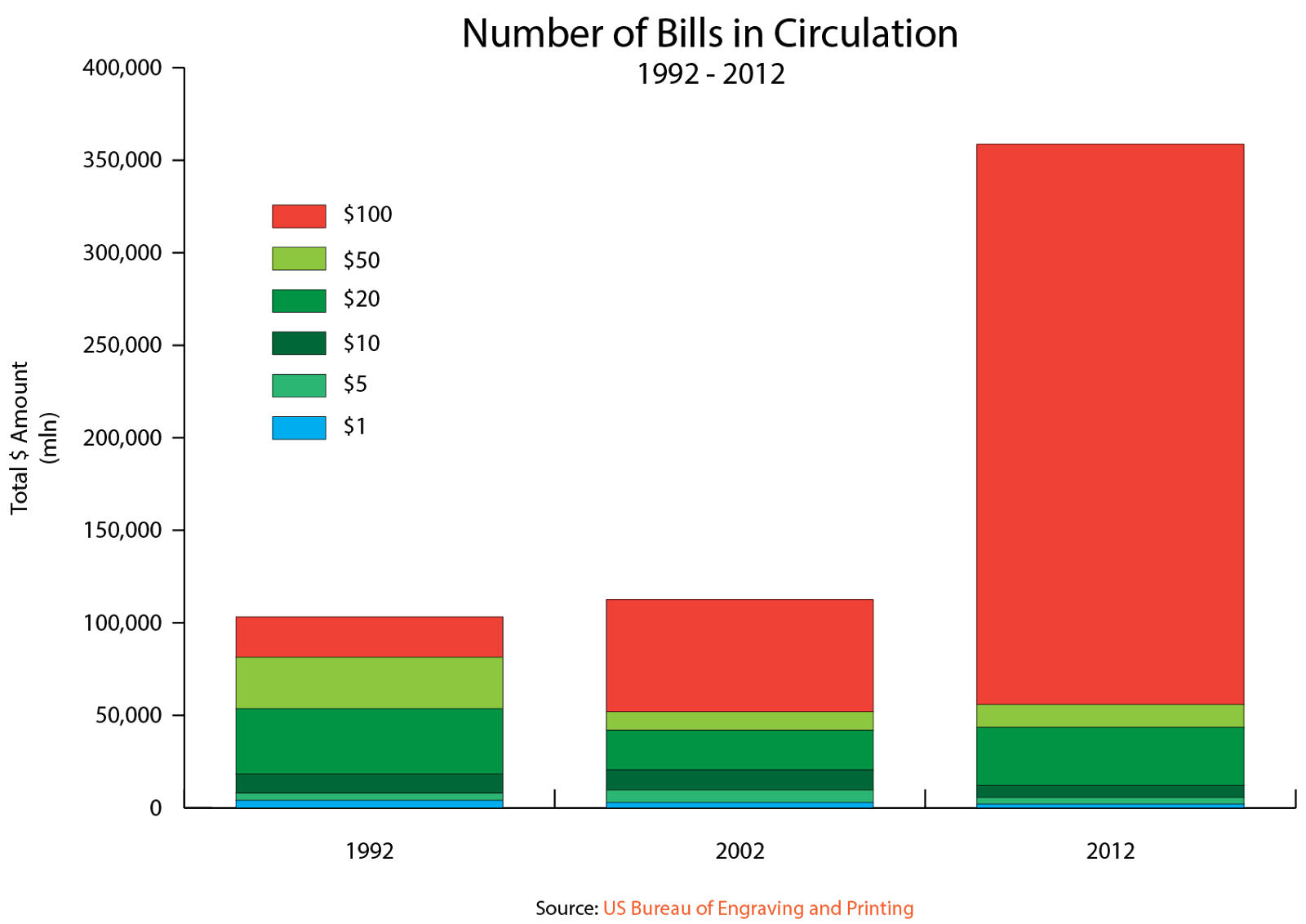 In fact, it is estimated that over 75% of total U.S. currency in circulation today is denominated in those Ben Franklin's. 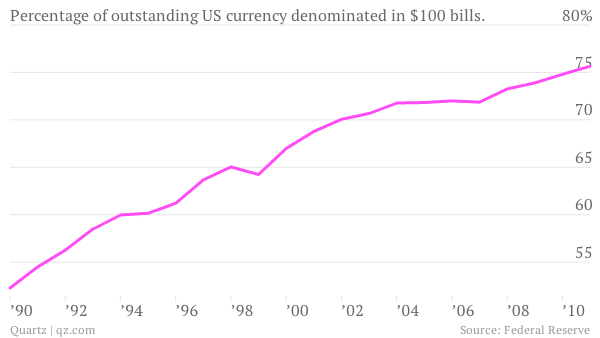 And to think that I rarely carry anything larger than a $20 bill on me because I think someone may not want to break it.  Where are all those hundred-dollar bills if you never see them?  It turns out that a significant number of them are residing overseas. Matt Phillips at the Quartz.com explains why the $100 greenback is so popular in foreign lands.

The cognoscenti look at the share of $100 bills as something of a proxy for foreign demand for US currency. An overwhelming majority of the $100 bills come from the Federal Reserve Cash Office in New York City, which handles the bulk of foreign shipments of US currency. A typical shipment is a pallet containing 640,000 such bills, or $64 million, according to a recent Fed paper.

And while there are plenty of reasons folks outside the US might want to hold dollars, the thinking is that most people are not using these $100 bills to buy milk and bananas. No, most economists seem to believe $100 bills are most often used as stores of value—almost something like mini-Treasury bills that don’t pay any interest. This is especially so in developing countries, where problems with unstable currencies and inflation often mean the purchasing power of local currency gradually—or not so gradually—erodes over time.

Of course, hundred dollar bills are also nice to have around if you might be dealing in illegal activities such as drugs, prostitution and the like. Those smaller bills can take up a lot of space and weigh you down if you need to start running.  Who wants some wise guy handing over a wad of singles?

To give you some context on just how fast the Bureau of Engraving and Printing has been turning out hundred dollar bills consider the following chart.  More hundred dollar bills were printed between 2010 and 2012 (the most recent data available) than were one dollar bills.  I am speaking of the actual notes, not the currency value.  That means that the currency in circulation over those three years denominated in $100 bills was up over 100 times compared to the $1 bills. 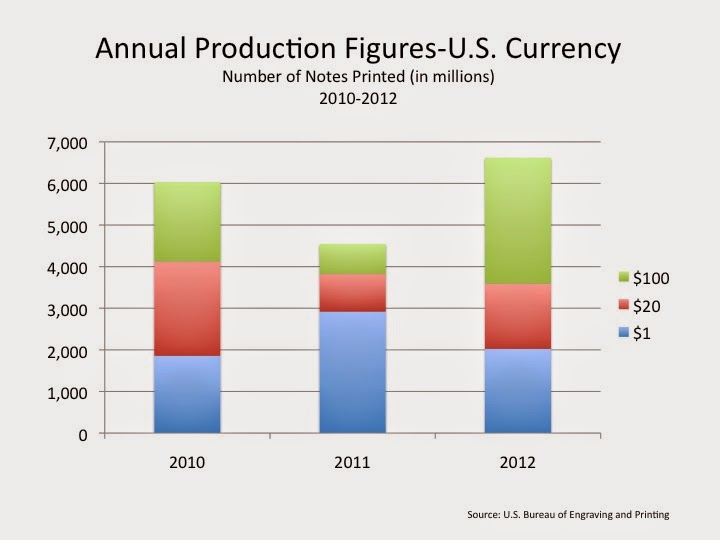 If you have not been overseas recently, done a drug deal, won big at a casino or work at the Bureau of Engraving and Printing, you might not have seen the new, redesigned $100 bill that debuted last Fall.  I have not seen it which tells you something about the life that I live.  However, I found this infographic on Google Images that shows the new look. If you come across one, send it my way.  BeeLine always needs (and accepts) cash. 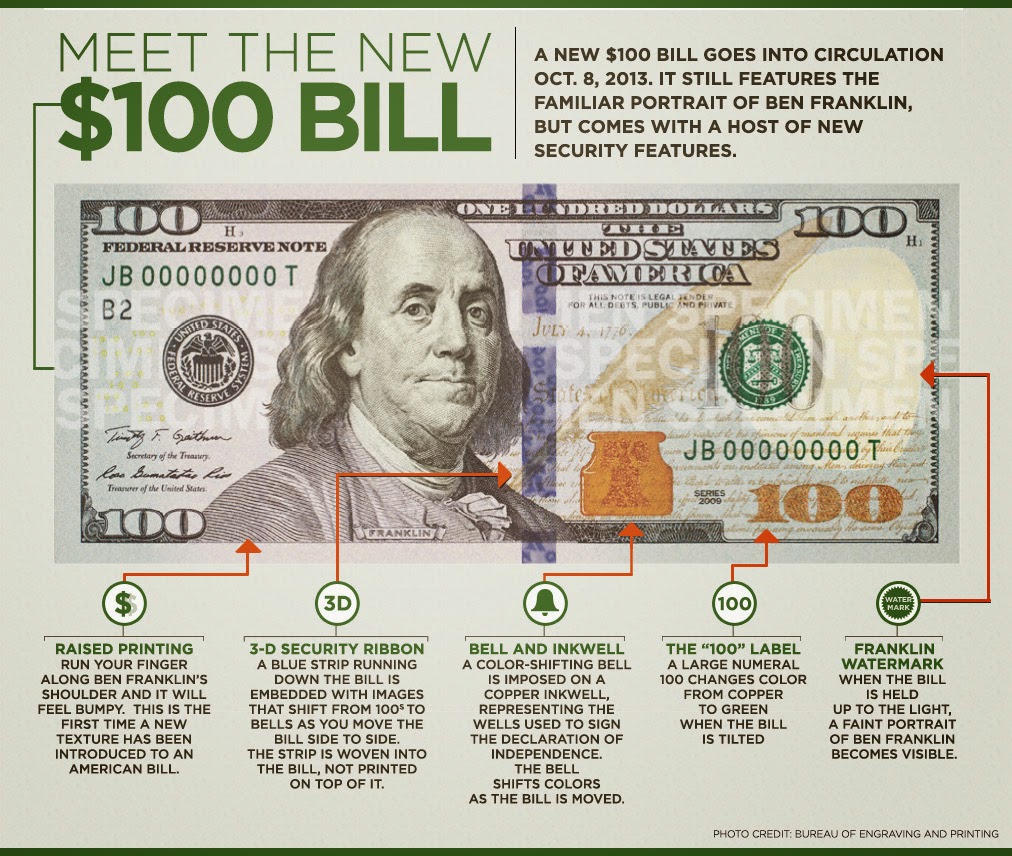