Tornado season is upon us.  Despite the fact that 2014 (thru 4/17) marks the slowest start to a U.S. tornado season on record, we are sure to see tumult and tears in the wake of twisters sometime this year.

Since I have many new readers of BeeLine, I thought I would republish the "Tornado Tale" that I first blogged about three years ago on the 50th anniversary of my own brush with a twist of a fate with a twister.

This post is still the second most read blog post in the 3+years I have been writing BeeLine.

Keep your eyes on the sky and seek shelter immediately if one of these terrible tornados is heading your way.

50 years ago today I came close to death.  I was in a house that took a direct hit from an EF4 Tornado in Eaton, Ohio.  It was shortly before 400pm on a late April afternoon and I was in my bedroom organizing baseball cards with my best friend.  My mother was visiting a neighbor with my younger brother.  I looked out the back window and looming straight ahead about a half mile away was the tornado dancing back and forth right in front of my eyes.  It appeared to be on a direct path to our home.

I remember seeing details that you normally don't pick up in photographs.  I clearly could see lumber, shingles and other debris swirling around near the top of the twister.  We made a quick call to my friend's home to warn them of the approaching tornado and headed for the basement.  We bounded down the stairs.  We heard the sound of a car's horn racing down the main road that was parallel to the tornado's path.  We later learned it was the family who operated the farm behind us who had decided to run for it rather than go to their basement.

A few seconds later the tornado hit.  It was a deafening roar.  It was as if you were standing right by the railroad tracks and a train was going by at enormous speed.  I remember covering my ears with my hands because of the roar.  I remember my friend and I shouting at each other at the top of our lungs but you could not hear over the sound.  Suddenly it got even louder and it sounded as if the entire house was caving in.  I remember looking up at the floor and joists above me and thinking that this was it.  I fully expected to be buried alive in the next few seconds.  Time did slow down.  I remember thinking I had just turned eleven years old and this was the end of the road.  It then became deathly quiet.  The floor had held and my friend and I checked each other to be sure we were all right.

We cautiously started up the basement stairs.  The door would not open but we both put our shoulder to it and pushed. We got it about half way open and slithered out.  Staring at us through the adjoining door to the garage was a steel beam that had been thrown around like a tooth pick. It had penetrated almost a foot through the door into the house.  The windows on the back side of the house that faced the tornado were all broken.  The draperies hung in tatters and were now blowing in the wind.  The windows on the front of the house were intact but were caked with dirt and grass that looked like it had been sprayed on.  The dirt was so thick you could not see through the windows at all.  All through the house lay debris.  Drywall from the ceiling was laying all over. You could look up and see the sky.

I tried to make my way back to my bedroom but I couldn't navigate the debris that littered the hallway.  My friend and I went out the front door and we could see the tornado continuing on its way to more destruction down the road.  It looked much better from the backside.

I did not have shoes on but I began running toward the house where my mother was.  It had been spared but for some minor damage.  It was a debris field of 2x4's, downed electric wires and protruding nails to get to her. I saw some hay straw blown straight in to some siding as if it was a nail. I reached my mother and looked back at our house for the first time.  I almost could not believe the sight.  It looked as if our house had been bombed.  I had a hard time choking back tears as I saw our house.  I kept saying to my mother, "Look at our house".  She just kept repeating, "It is ok.  You are alive".  Even after 50 years, you do not forget a day like that.

Photographs and other background on the tornado of April 25, 1961 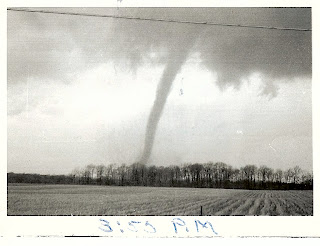 Photo taken of the tornado by a local photographer at close to the time it destroyed our house. 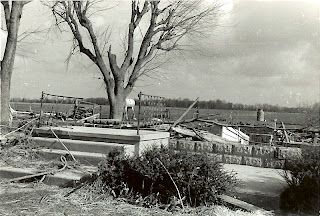 Photo of what was left of the Turner farmhouse that was directly behind our house.  Witnesses said that when the tornado hit the 2-story frame house it lifted it straight up and the house exploded and deposited almost all of the debris in the basement.  Fortunately, the Turner family did not go to the basement for shelter.  Mr. and Mrs. Turner started for the basement but their 20-year son did not feel the house could withstand the tornado.  They jumped in their car and made a run for it.  That decision undoubtedly saved  their lives. It was their car horn I heard in the basement right before the tornado struck. Our house was totally constructed out of stone.  I was in the basement on the left side of the house as you look at this picture.  The people are on top of debris that used to be the garage and a back porch that were on a slab.  It was the sound of the collapse of this part of the house that had me thinking the entire house was coming down on me. 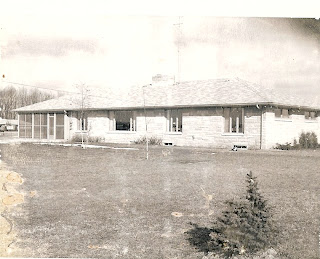 The house as it looked shortly after construction in 1957 (4 years before the tornado). 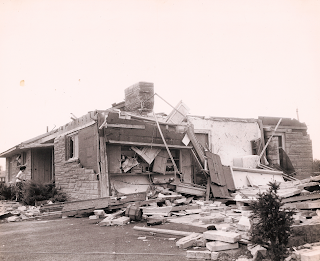 The house from the right front showing the collapsed garage.  I was in the basement near this corner of the house.

Through April 24, according to the National Weather Service, there have been 438 confirmed tornadoes in the United States. Only one has been an EF4 similar to the Eaton tornado of 1961.  We have already seen 306 tornadoes in April, 2011. This is the highest April total ever.  The previous record was 267 in 1974.  The average number of April tornadoes is 163.  Keep your eyes on the sky and take shelter immediately if one of these terrible twisters heads your way.
Posted by BeeLine at 5:00 AM