From time to time I write about interesting data I come across.  Here are three charts that I saw last week that I thought were worth commenting on.

The first chart is a comparison of U.S. per capita gasoline sales versus price per gallon prepared by Doug Short.  It shows a continuing decline in gasoline sales that began in earnest at the beginning of the Great Recession and shows no sign of reversing.

Here are Short's comments on the data in the chart from an article in Business Insider.


What does this analysis suggest about the state of the economy? From an official standpoint, the Great Recession ended 54 months before the most recent gasoline sales monthly data point. But if we want a simple confirmation that the economy is in recovery, gasoline sales continues to be the wrong place to look.
In addition to improvements in fuel efficiency, the decline in gasoline consumption is attributable in large part to some powerful secular changes in US demographics and cultural in general:

The second chart is Gary Shilling's INSIGHT newsletter (via John Mauldin's "Outside The Box" and shows comparative stock and bond performances since the great rally in bonds began in 1981. 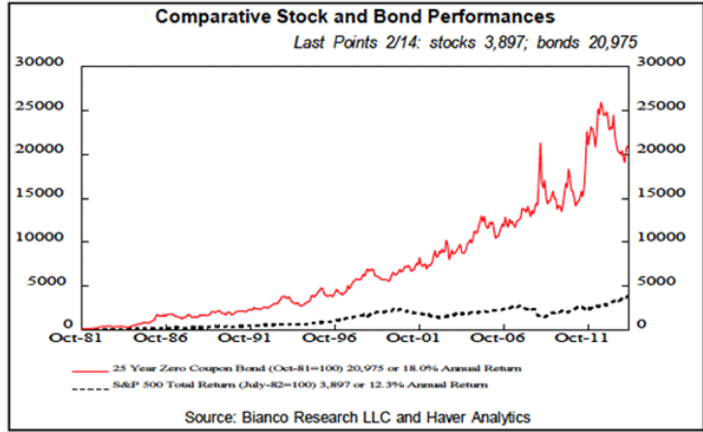 An investor in the S&P 500 would have seen $100 invested in that stock index grow to $3,897 and undoubtedly feel very good about the 12.3% annual return since that time.

It also tells me that the next couple decades we are likely to find it very difficult to make a decent return with long-term treasuries.

The third chart is from Robert Folsom of Elliott Wave International that shows that for the first time in over one hundred years the top 10% of U.S. households have more than a 50% share of total income in the country. 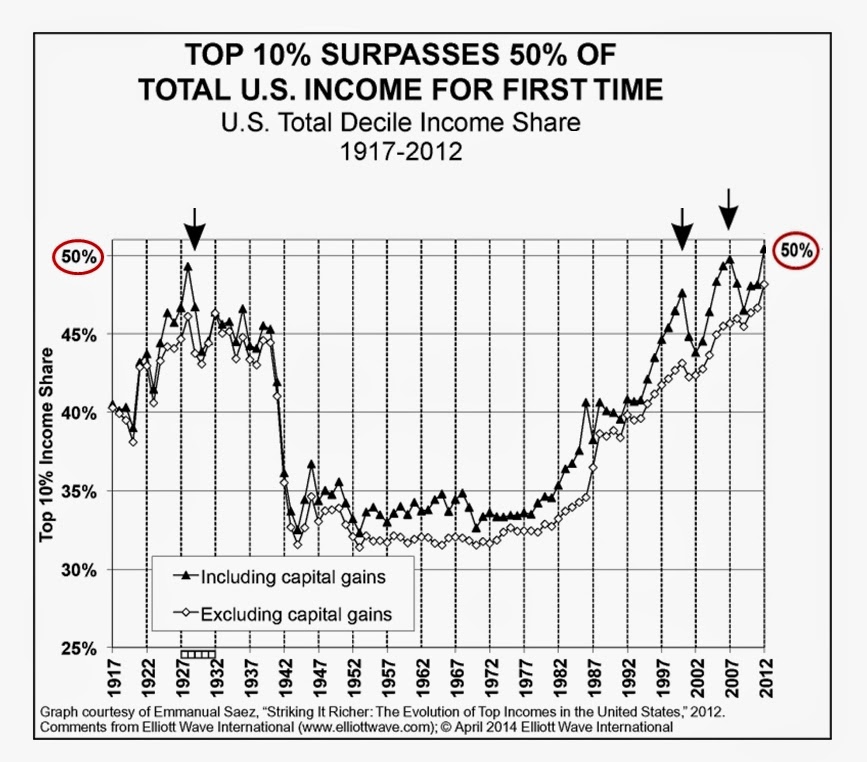 As Folsom points out in his article, "income inequality" is very much a hot topic in the news.

President Obama and the Democrats can be expected to play up this issue a lot this year to make it a political point and to argue the economic system is stacked against the other 90%. They will undoubtedly argue that taxes should be raised to make the system "fairer".

Folsom thinks that it is an indicator that the stock market is ripe for a devastating decline. Large stock market declines all occurred soon after this level of income concentration was reached in 1928, 2000 and 2007.

However, in viewing the chart, I found it interesting that the income levels are not driven just by the stock market and capital gains. It is a function of income excluding capital gains as well.

It is also interesting in looking at the chart that the Great Depression did very little in reducing income inequality despite the large stock market crash. Income inequality only was reduced when World War II started. And income equality then stayed pretty constant for 40 years-from 1942 to 1982.

What does that tell me?

Greater income equality did not result by pulling the rich down. It came about by everybody else being pulled up during the industrialization that occurred in World War II which then continued over the next 40 years as the United States was the manufacturing leader of the world and significant productivity increases were obtained that were then enjoyed across the U.S. economy and its workers.

Manufacturing spreads income in a much broader swath in an economy. You need to pay a lot of workers to build an automobile. You only need a couple of computer programmers to develop a video game that might sell millions. For example, Instagram only had 13 employees when it was sold to Facebook for $1 billion.

The information economy has meant there is increased demand for highly skilled and educated workers which has resulted in increased incomes for those in the top 10%. Those with fewer skills and less education find themselves competing in a world economy with workers from China, India and elsewhere. In effect, the supply of labor has increased with this group while many of the jobs have also gone offshore. The chart above tells the tale.

I don't know what this means for the future. However, I do know that you don't build up the poor by pulling down the strong.

This problem can only be solved with growth---both in the economy as well as in fostering personal growth.  I wrote about how that can be accomplished in my post, "It's All About Growth.".