You Don't Build Up The Poor By Pulling Down The Rich

"No person was ever honored for what he received.

Honor has been the reward for what he gave."


I was reminded of this quote by Calvin Coolidge as President Obama has attempted to make something of income equality.  Of course, I don't hear anything said about effort inequality, work inequality or capability inequality.

The fact is that different people put different effort and work into different things.  People also have diverse capabilities and talents.  I can barely hammer a nail in straight.  My father-in-law can build anything.  He builds and fixes things at our house and I do his taxes.  We both end up in a better position than we would on our own.

Thomas Sowell wrote about "The Inequality Bogeyman" in his column recently.

We are lucky that we are so different, so that the capabilities of many other people can cover our limitations.


Sowell points out that the obsession of the liberal intelligentsia is on the money people receive and almost no attention is paid as to what causes other people to give them that money.  In other words, let's focus more on what people give to society than what they receive. As Coolidge suggested, this is what really matters.

When the intelligentsia discuss such things as the historic fortunes of people like John D. Rockefeller, they usually pay little — if any — attention to what it was that caused so many millions of people to voluntarily turn their individually modest sums of money over to Rockefeller, adding up to his vast fortune.

What Rockefeller did first to earn their money was find ways to bring down the cost of producing and distributing kerosene to a fraction of what it had been before his innovations. This profoundly changed the lives of millions of working people.

Too many discussions of large fortunes attribute them to "greed" — as if wanting a lot of money is enough to cause other people to hand it over to you. It is a childish idea, when you stop and think about it — but who stops and thinks these days?

The transfer of money was a zero-sum process. What increased the wealth of society was Rockefeller's cheap kerosene that added hundreds of hours of light to people's lives annually.

Edison, Ford, the Wright brothers , and innumerable others also created unprecedented expansions of the lives of ordinary people. The individual fortunes represented a fraction of the wealth created.

Is it any different today?  Are we supposed to begrudge Steve Jobs or Bill Gates and say that they were greedy when they founded Apple and Microsoft? What about Jeff Bezos and Amazon?
The reality is that each of these men has given much, much more to all of us through their effort and innovation than they ever received.
No one is forced to buy an iPhone or use PowerPoint or buy a book on Amazon.  The only thing you are forced to buy right now is an Obamacare healthcare policy :).  Therefore, Obama might have a point with regard to the CEO of Anthem or Aetna.
The money and wealth that is in the hands of the rich came from you and me and many others because we saw value in the trade for our own benefit.

The money itself is not wealth. Otherwise the government could make us all rich just by printing more of it. From the standpoint of a society as a whole, money is just an artificial device to give us incentives to produce real things — goods and services.

Those goods and services are the real "wealth of nations," as Adam Smith titled his treatise on economics in the 18th century.

Even those of us who create goods and services in more mundane ways receive income that may be very important to us, but it is what we create for others, with our widely varying capabilities, that is the real wealth of nations.

This is an important principle to remember as President Obama takes to the airways to try to create division and dissension among us.

It also seems appropriate to close with another quote from Calvin Coolidge that is worth remembering.

"Don't expect to build up the weak by pulling down the strong."

That has been the undoing of many, many economies over the years. 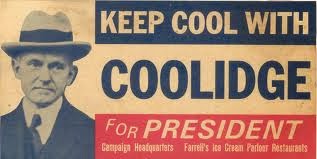 I know it hard to for many young people to believe but we once had an even cooler President than Barack Obama!
Posted by BeeLine at 10:22 PM