One of the first posts that I wrote when I started writing BeeLine three years ago was about Amy Chua who wrote an essay in the Wall Street Journal on "Why Chinese Mothers are Superior."  She also wrote a book on the subject, Battle Hymn of the Tiger Mom.

Chua's essay received a lot of attention and, not surprisingly, a great deal of criticism with her straightforward citation of three main differences between Asian and Western parenting styles as she made the case as to why Asian mothers were raising higher achieving children.


Having three children who competed in the classroom and in music with Asian children in high school  and speaking with their parents, I understood where Chua was coming from.  These parents generally held their children to higher expectations and strongly believed in the ethic and value of hard work.  To a much, much higher degree than other parents I knew.  And my wife and I for the most part.

Of course, it is always dangerous to generalize.  Not every Asian parent brings their children up the same way. There are Asian kids who are slackers, C students and can't play a C-flat.  However, stereotypes are a fact of life and anyone who denies they don't do it either is not telling the truth or does not understand how the human mind works.

If you are human you use heuristics, bias and stereotypes every day. If you don't know better you are going to start with a default position as you assess things. For example, if you are looking at a product you are not familiar with and you have two items to choose from, you are going to assume the expensive option is better. If you move to a new city and need to open a bank account, you are going to assume that the bank with 50 branches and the skyscraper downtown is better than the bank with one office. After all, if they got that big they must have done something right.

However, as I pointed out in my post earlier this year, Toil, Training and Talent, the success of those Asian students has little to do with innate "talent". It is largely a function of the expectations of the family and just plain old hard work, practice and study.  That is the secret.

Malcolm Gladwell in his book, Outliers attributes it to a "rice paddy" attitude. Simply stated, tending to a rice paddy is a 360 day, 3,000 hour per year activity. It is exacting, hard work where effort and dedication make a huge difference in results. The peasants that tended these rice paddies may be long gone but the culture carries on in their progeny. Gladwell makes the point that there is nothing that indicates that Asians are naturally any better at math, science or music but each requires hard work, persistence and doggedness. It is more attitude than aptitude.

Chua is out with a new book tomorrow (co-authored with her husband, fellow Yale University professor Jeb Rubenfeld), The Triple Package:Why Groups Rise and Fall in America,  which is sure to raise some more hackles and controversy.  In the Triple Package Chua and Rubenfeld explain their belief as to why some religions and races have been more successful in America than others.

You have to admit that Chua is not afraid of taking on some tough issues for thought and discussion.

First, religion.  Chua states that those of the Jewish and Mormon faith have has outsized success in American compared to their Protestant, Catholic, Buddhist, Muslim, and atheist counterparts.

Second, race or culture.  Indians, Chinese, Iranians, Lebanese, Nigerians and Cubans have achieved a relatively higher level of success in America compared to their counterparts according to the authors.

Or course, some critics of Chua and Rubenfeld see an internal bias in their conclusions since Chua is from from a Chinese culture (her parents) and Rubenfeld is Jewish.  However, my own experiences over my lifetime confirm what they are saying about these groups.  They fit into my own stereotype that would be my default position I had to guess, successful or not?

So what do these groups have going for them? The authors cite a "cultural edge" that allows them to better take advantage of the opportunities that America offers.  They see a "Triple Package" of elements that provides these cultures that edge that has given them disproportionate success compared to their numbers in American society.

What do each of these mean?

Each of these groups has a basic belief that they are exceptional.  That they are a cut above in contrast to the way most Americans are taught to believe that everyone is equal.  These groups don't believe that. They believe in themselves first and foremost.

You might ask that if that is the way they feel how could insecurity come into play in "The Triple Package"?  This seems contradictory.  However, I see it as the difference in how they believe others view them.  In their heart they believe in themselves but in their head they know others don't, As a result, they believe they have something to prove, to themselves and others. This drives these groups to outsized success.

Finally, self-control.  This is the ability to delay self-gratification and exhibit self-discipline.  It is also the ability to not give into temptation and quit when the going gets tough.

Of course, none of these attributes is the domain of any group.  Each of these could be readily embraced by anyone in America. Those are the stereotypes coming into play again.

I have not read "Triple Package", only a couple of summaries and reviews.  I am not sure that I buy into everything that I think Chua and Rubenfeld are saying.  However, the basic elements of success that they are writing about here are not much different for anyone in my book.

It starts with your attitude. No one is going to achieve success without believing that they can do it and the patience to carry it through the steps necessary.

John Wooden, the former UCLA basketball coach, called it the Pyramid of Success.  You see many of  the same elements over and over when someone is writing about the secrets of success whether it is Chua, Gladwell or Syed (who I profiled in Toil,Training and Talent). 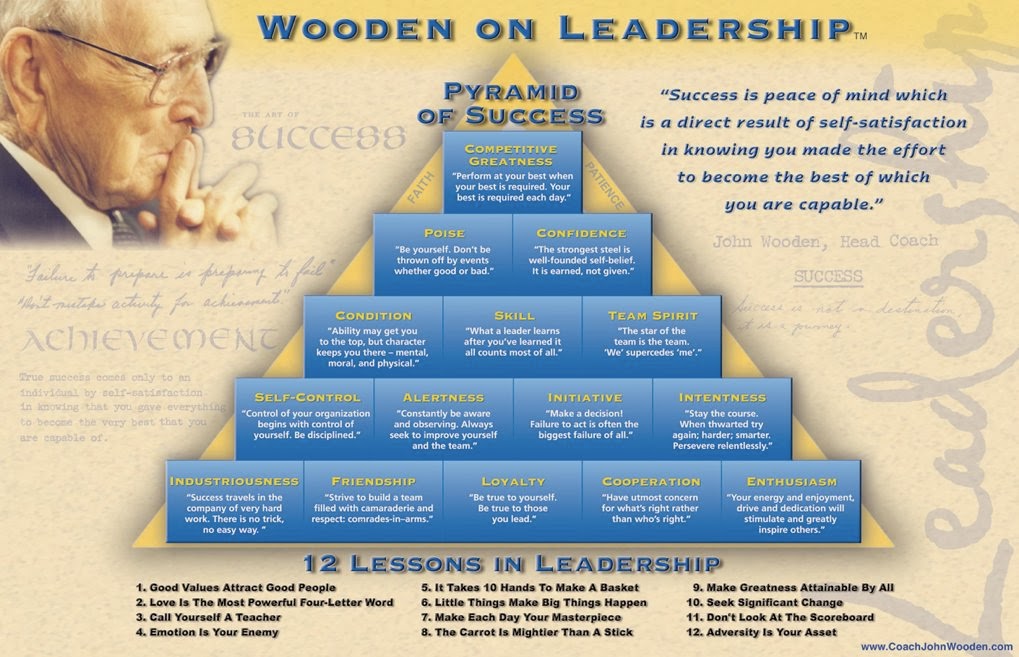 There is no secret to success.  It is much like the Super Bowl last night.

And in the United States of America, everyone is given opportunity unlike any other place in the history of mankind.

My wish is that more people believed it and achieved it.  It is there for everyone.