Of Fish and Ponds

Is it better to be a big fish in a small pond or a small fish in a big pond?

This is a question that I have pondered over the years.  Thinking about myself as well as for my children.

There are obvious advantages to being the big fish in the small pond. Competition is not as stiff in the small pond and this can be an advantage in building confidence.  It is simply easier to compete by getting a chance to practice and hone your skills without feeling inferior along the way.

However, in the long run we all have to compete in the big pond.  And the pond has gotten even bigger over the years with increased mobilization and globalization.  At some point you have to test yourself against the best.  After all, it is only by going up against the best that you can have a chance to be the best. But which is the best path to travel to get there along the way?  The small or big pond?

Malcolm Gladwell in his new book, David and Goliath, seems to come down pretty firmly on the side of the big fish in a small pond. 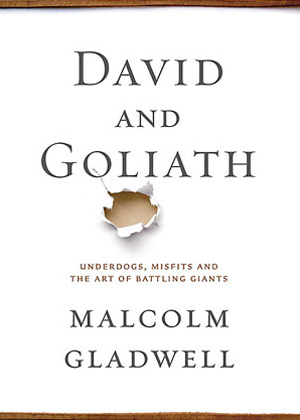 A big part of the reason deals with the belief you have in yourself. And that also has a lot to deal with whether you will continue to put the work in that is necessary to succeed over the long term.

The small fish in the big pond is much more likely to get discouraged and quit because they think they are not good enough.  The big fish in the small pond does not feel that way.  Each success reinforces their belief in themselves.  They continue to practice and work and, as a result, they also get better and better.  At some point they may move to the big pond and they can be very successful.  Starting in the big pond right from the start they very likely would never would have made it.  They would have quit in discouragement thinking that they could not measure up.

This occurs because we form our impressions of ourselves by looking locally, not globally.  We don't compare ourselves to the broadest group but to those immediately around us.  That is our frame of reference.

Gladwell makes the point by asking which countries have the highest suicide rates?  Countries such as Switzerland, Denmark or Iceland whose citizens say they are very happy.  Or Greece, Italy or Portugal where people consistently say in surveys they are unhappy?  The reality is that suicide rates are much higher in the "happy" countries. After all, it must be much harder to hold it together if you are depressed in the midst of a sea of smiling faces.  On the other side, misery does indeed seem to love company.  If everyone is unhappy in the same boat it doesn't seem quite as bad after all.

According to Gladwell, all of this should cause some concern when considering the real value of affirmative action programs which are designed to assist disadvantaged minorities.  These programs are clearly well-intentioned. However, looking at the big picture, is it really helping these groups?

Why is this important?

Research by law professors Richard Sander and Stuart Taylor indicates that getting great grades at a good school is better than getting good grades at a great school when entering the legal job market.  For example, a top fifth class rank at Fordham had jobs and better compensation than a middle class rank at much more prestigious Columbia Law School.

How does Gladwell sum it up?

Parents still tell their children to go to the best schools they possibly can, on the grounds that the best schools will allow them to do whatever they wish. We take it for granted that the Big Pond expands opportunities, just as we take it for granted that a smaller class is always a better class.  We have a definition in our heads of what an advantage is-and the definition isn't right. And what happens as a result? It means that we make mistakes. It means that we misread battles between underdogs and giants. It means that we underestimate how much freedom there can be in what looks like a disadvantage. It's the Little Pond that maximizes your chances to do whatever you want.


I came across this graphic from Boom Football that also makes the point quite well by comparing the Super Bowl rosters of Seattle and Denver based on how highly recruited the players were coming out of high school.  The number of stars indicate how highly the athletes were ranked by college football recruiters.

Note that on both the Seahawks and the Broncos rosters the number of 2-Star and Unranked players is higher than the 5-Star and 4-Star players.  The reality is that the elite BCS (big pond) programs (Alabama, Notre Dame, Ohio State, Texas, USC etc) rarely even recruit an athlete that is 2-Stars or below.  These kids end up at smaller schools (little ponds) where they have a much greater opportunity to play and develop their skills.  On the other hand, many 4-star and 3-star recruits at the bigger schools may get little playing time and never progress.

Who ends up in the NFL? 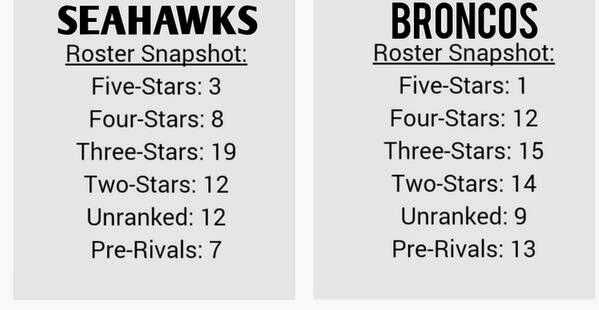 Don't underestimate the small pond.
Posted by BeeLine at 10:10 PM