Which is the surer path to success? Possessing great talent or having a great work ethic?

Matthew Syed, the author of Bounce, believes he has the answer to the science of success. 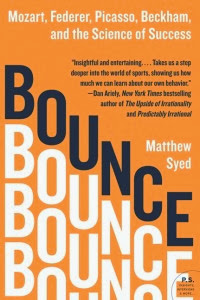 I read Bounce over the holidays and it is worthwhile to consider Syed's conclusions as we each look to the New Year and consider our resolutions for the next 12 months.

Syed knows something about success. He was the top-ranked table tennis player in the UK and is a two-time Olympian as well as a graduate of Oxford University.  You might say that he is a talented young man.  Syed would say to you that talent is not what you think it is.

Extensive studies have shown that the difference between an expert and you is nothing more than a life-long persistence of deliberate effort and purposeful practice to improve performance. Specifically, about 10,000 hours of practice.

Hogwash, is what you are probably saying. You are saying that you know you are not a natural athlete or a natural musician. Perhaps that was true the first time you tried something.  However, most of those observations are based on a few weeks of half-hearted effort.  The only thing you have proven is that you lack the desire and motivation to be good and to undertake the effort and purposeful practice that would bring you success.

What the research says is that the only talent difference between you and that person on the stage or on the court today is that they persevered and you did not. You too easily accepted the fact that you did not have the talent. Those that find success have an entirely different mindset that fosters growth in their "talents" that eventually is realized if they work at it long enough.

One of the landmark studies on the causes of outstanding performance was conducted by Anders Ericsson, a psychologist at Florida State University.  Ericsson studied young violinists at the renowned Music Academy of West Berlin in Germany.  He looked at three groups-the truly outstanding students who were expected to be world class international soloists, a second group of those who were considered extremely good and were expected to one day be in members of the world's top orchestras, and a final group of the least able students who would most likely end up as music teachers.

Ericsson found that the biographical similarities of the three groups was almost identical. They had all started playing at about the same time, had been taught by similar teachers and had similar musical backgrounds with other instruments beyond the violin.

What's more, Ericsson found no exceptions to this pattern.  Nobody in the top group got to the elite level without hours and hours of practice and nobody who had worked their tails off failed to excel.

I found the story of Laszlo Polgar even more compelling in Syed's book. Polgar is a Hungarian educational psychologist and was one the earliest advocates of the practice theory of expertise.  He believes that children have extraordinary potential and it is society's role to unlock it. In his younger years he spent an enormous amount of time trying to convince government and educational officials about his theories and urging them to adopt his ideas to little success.

He finally decided the only way he could prove his ideas was to get married and use his own children in an audacious experiment.  He set out to find a wife while also explaining to his potential mates about his plan to produce children with world-class abilities.  As you would expect, most females ran the other way. However, a young woman named Klara found his arguments and his charm irresistible. They married in 1967 and exactly two years later Klara gave birth to their first daughter, Susan.

Polgar spent long hours thinking about the specific area in which Susan would be directed to achieve world-class success.  After much thought and contemplation he decided that chess made the most sense due to its objective rating system.  Polgar did not want to take a chance on something like art or music where Susan's abilities might be judged in more subjective ways.

Polgar was only a hobby player and Klara did not play chess at all. However, he introduced Susan to the game at home and schooled her in the basics of play taking care to never force it on her and making sure it was always fun.  Susan quickly became enamored with the game and by her fifth birthday, she had spent hours of dedicated practice at the chessboard. She soon was winning local competitions against girls twice her age.

About the same time Laszlo and Klara had a second daughter, Sofia, and a third daughter, Judit, was born two years later.  Seeing their older sister playing chess so studiously only made the two younger sisters even more eager to play chess themselves.  However, Laszlo did not start the younger sisters playing the game until they were five.

Each of the girls enjoyed playing and practicing chess.  By their teen years they had all accumulated well over ten thousand hours of specialized practice.

Did they become world-class experts?

Susan won the world chess title for girls sixteen and under at age 12. By age 14 she was the top-rated female player in the world. At age 22 she became the first woman player in history to become a grandmaster and she won four World Championships before she retired from competition.

Sofia won the world girl's chess championship for girls 14 and under at age 12.  In one tournament in Rome at the height of her career she defeated eight of the greatest male players in one week in a performance that has been rated as the fifth greatest, by man or woman, in history.

Judit ended up being the best of the three sisters.  She became the younger grandmaster-male of female- in history at age 15.  Over the course of her career she has victories over every top player in the world and has been the top-rated female for well over a decade.  She is considered the greatest female chess player of all time.

Despite the fact that Polgar publicly stated that he would have children who were world-beaters (before they were even born) due to his practice theory of expertise, many still think that all of their success had something to do with their genes or was just pure luck.  Polgar states his children were not prodigies, they were merely the products of purposeful practice.

This is a good lesson to keep in mind as we begin the new year.

We all have extraordinary abilities and gifts. Innate talent is very highly overrated.  Hard work and training are very highly underrated.

Success is within reach for almost everyone if you are willing to put forth the dedication and effort and are willing to stretch yourself, and even fail, in the quest to better yourself.

It really comes down to this quote by Henry Ford who knew something about success and hard work.


What all this says to me is that aptitude is really a function of attitude first and foremost.

I am going to remember this lesson even more because of Syed's book in the new year.  Oh, what a world we would have if everyone did the same.  How is that for an audacious wish for 2014?