Does Hot and Humid Beat Cold and Hungry?

It seems that a lot of things that I was writing about a year or so ago have gotten the attention of other writers recently.

Women in combat, the labor participation rate and the secrets of the rich are all topics that I covered  a while back that have been picked up by other writers in recent weeks.

I had another deja vu moment last week when I saw this column by Michael Barone in the Washington Examiner asking the question, "Do we face a disastrous century due to global cooling?".

That reminded me of a blog post I wrote almost three years ago, "I'll Take Hot Rather Than Cold Any Day".

Of course, even without seeing Barone's column I probably would have been reminded of my own words about "climate change" as I woke up yesterday to -5F on the thermometer outside on my deck.  If that was not enough, I also heard on the radio yesterday that my hometown of Cincinnati is a mere 6 inches of snow away from breaking the historical annual snowfall record for the city.

It sure doesn't feel like I should be worried about global warming.

Here is what I wrote three years ago on the subject of climate change.

I am not a climatologist or meteorologist. However, I consider myself a practical thinker who makes decision by looking at facts. I have also learned that it is always important to look beyond the "facts".  How are the facts packaged and what is the motivation of the messenger.

Over the years, I have listened to the claims about human created global warming.  Without even spending a lot of time on the science, these claims never seemed to make sense to me.  The planet is known to have warmed and cooled over the years.  Even if the data shows it is warming, how do we know it is caused by man when you look at past history?  We know there was an ice age.  We also know the ice melted.  How did it ice up? How did the ice melt?

I can't help but be a little skeptical when I also see the changing explanations about the climate.  In fact, it does not even seem to be global warming we are worried about any more, it is climate change.  We also heard a few years ago that we would see far less snow because of global warming.  When we got more snow, we were then told this was caused by the warming.

It is all very confusing for something that is supposed to be so settled in science. I also remember in the late 1970's and 1980's all of the talk from scientists was concern that the planet was cooling.  What happened?  That was only a few short years ago- a speck of time in the history of the earth.

When you consider past history you also quickly realize that God dwarfs anything that man can do.  For example, the year 1816 was considered "The Year Without a Summer" after Mount Tambora erupted and the ash seemed to veil the sky across large swaths of earth.  Crops failed around the world and famine followed.  Riots and political unrest were not far behind.  People tend to get really angry when they are hungry.  How much did the average global temperature fall that year? - only about 1 degree!

That story has always made me much more concerned about global cooling than warming.  A rise in temperatures is actually beneficial for food production.  It can extend the growing season further north. Cooler temperatures do the exact opposite.  Given a choice there is little doubt where I come down.


That is a nice lead-in to Barone's column where he posits the question of whether we are facing a period of global cooling? What is of interest are recent reports about sharp reductions in sunspot activity.

Is this something to be concerned with?

Historian Geoffrey Parker thinks so. In his book Global Crisis: War, Climate Change & Catstrophe in the Seventeenth Century, Parker recounts the political and demographic disasters that plagued the world in that global cooling century. 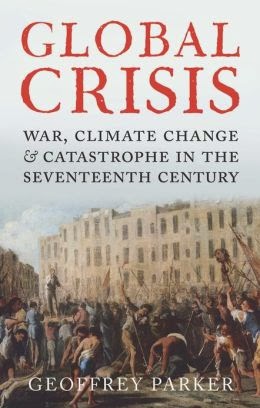 What caused all of this? Climate change. However, it was not global warming, it was global cooling that caused longer and harsher winters and cooler and wetter summers. This resulted in disrupted growing seasons that caused famine, malnutrition, death, disease and fewer births.

What seemed to cause the cooler climate according to scientists?  Lack of sunspot activity.

“The development of telescopes as astronomical instruments after 1609 enabled observers to track the number of sunspots with unprecedented accuracy. They noted a ‘maximum’ between 1612 and 1614, followed by a ‘minimum’ with virtually no spots in 1617 and 1618, and markedly weaker maxima in 1625-26 and 1637-9. And then, although astronomers around the world made observations on over 8,000 days between 1645 and 1715, they saw virtually no sunspots: The grand total of sunspots observed in those 70 years scarcely reached 100, fewer than currently [the book was published in 2013] appear in a single year. This striking evidence of absence suggests a reduction in solar energy received on earth.”


The sun's recent sunspot activity is at its lowest level in 100 years. In fact, some scientists see eerie similarities in the sun's activity to the period right around 1645 when the so-called mini ice age hit.

Again, I am not a climatologist or meterologist.  However, I do know that people like to eat.  Having enough to eat is pretty important for survival.  The simple fact is that a warmer world climate would tend to increase the food supply with longer growing seasons.  A cooler climate will generally shrink the growing seasons and the food supply.

Of course, there are other factors connected to climate change such as water levels, water supplies and the like.  However, on balance, history tells us that colder is generally worse than warmer for life on earth.

Therefore, still count me as saying that I'll take hot rather than cold any day.

Especially as I gaze at my thermometer outside reading 4F at the moment.

Try me again in August to see if I have changed my mind.  You never know.  I do respond to facts.
Posted by BeeLine at 8:38 PM