I came across a report today on the costs of inpatient hospital costs in the United States from the Agency for Healthcare Research and Quality.

This Statistical Brief entitled, "National Inpatient Hospital Costs: The Most Expensive Conditions by Payer, 2011" provides the distribution of inpatient costs by primary payer as well as illustrating which conditions accounted for the largest percentage of each payer's hospital costs.

Who are the payers?  The primary payers are Medicare, Medicaid, private insurance and the uninsured.

Here are some of the interesting factoids I found in the report. 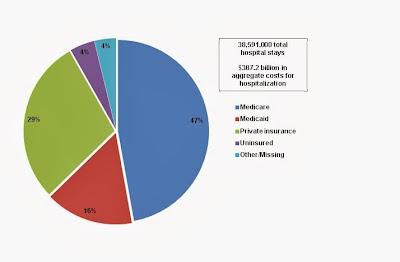 What I found interesting in looking at the report was that total inpatient costs billed to uninsured patients totaled only $17 billion for 2011 representing only 4% of total inpatient costs.  And to think that the country went through Obamacare principally because of these "high" hospitals costs that were being transferred to the rest of us?  It truly boggles the mind when you look at the data.

In addition, there are many liberals that believe that the country needs "Medicare for All".  Again, looking at the data, almost 2/3 of inpatient healthcare costs are for individuals on Medicare and Medicaid.  Only 29% of costs are incurred for private insurance.  It almost seems that we are not too far from "Medicare for All" anyway.
Posted by BeeLine at 9:10 PM