When do you reach the point that government is no longer governing but it is doing nothing but redistributing?

Is it even a government at that point?

I have previously written about the gigantic increase in the amounts of payments for individuals in the federal budget over that last 70 years. 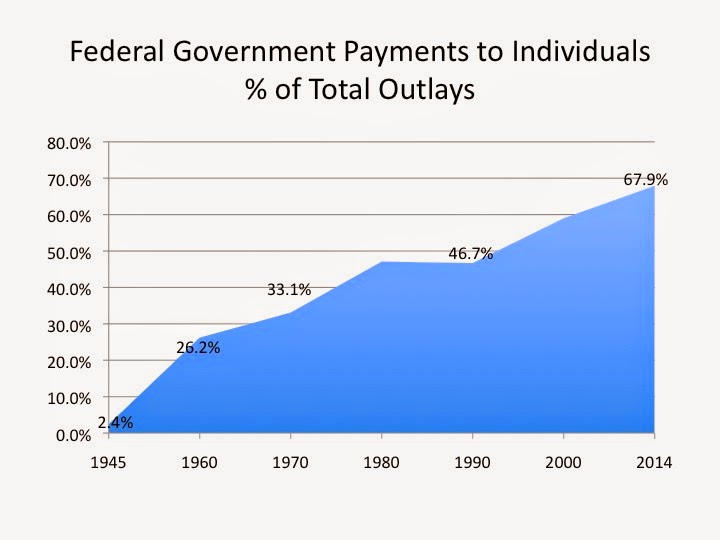 Less than 1/3 of the budget today is spent on what the Constitution established as the big priorities and what most people think of as the true functions of government---defense, justice, police, roads, parks, education, public health and the like.  In 1945, we spent 97.6% of the budget on these items. In 1960, we spent about 75% on these priorities. As late as 1990, we still spent the majority of the federal budget on these government roles.

Direct payments to individuals now account for 67.9% of all federal expenditures in the federal budget. In dollars, that is $2.57 trillion out of $3.77 trillion in total spending.

In other words, we are spending twice as much on these "special interest" payments as we do on defense, justice, prisons, roads, research, national parks and everything else that is for the overall "public interest"---combined!

If Defense spending is excluded (arguably the one function of the federal government that is probably most essential), direct payments to individuals account for 82% of all federal spending.

However, we have not seen anything yet. A recent Congressional Budget Office report shows that in only ten years payments for entitlements, mandatory spending and interest on the federal debt will consume 93% of projected federal revenues.

Put another way, there will only be enough tax revenues after paying for Social Security, Medicare, Medicaid, other mandatory federal spending programs (welfare etc) and interest that only 7% will be left for everything else.

I always find it interesting that in federal budget language, defense, roads, public health and running the government are discretionary but welfare, food stamps and unemployment compensation are mandatory.

The chart below provides a picture of how we are spending money today in the federal budget and what it will look like in 10 years based on the most recent Congressional Budget Office projections.

77% of federal revenues today are going to fund entitlements, mandatory spending and interest, leaving only 23% of federal revenues for traditional government functions like defense, roads, education, parks, public health, the post office and the like. By 2024, the CBO projects that 93% will be going to "mandatory" spending and only 7% will be left for everything else.

I dare say that when government is only spending 7% on government, you have no government left. It is scary to think that we will be at that point in a scant ten years. 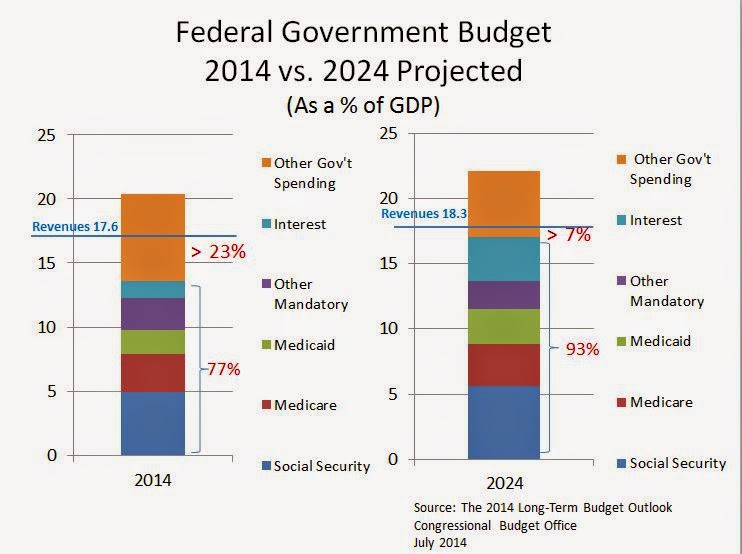 Let's look at the numbers in a little more detail. The CBO has used % of Gross Domestic Product to reflect spending in each category and revenues so it is easy to compare the projections from year to year. To put this in context, U.S. GDP for 2014 is estimated at approximately $17.2 trillion. Therefore, 1% of GDP is equal to $172 billion in today's dollars.

Medicare spending is projected to go from 3.0% to 3.2%. This looks too low to me and obviously assumes that health care costs are going to be constrained more than they have been in the past.

Medicaid spending (including Obamacare exchange subsidies) is projected to increase from 1.9% to 2.7%. Note that in dollar terms this is larger than the increase in projected Social Security spending. It is also 4x the increase in the amount of projected Medicare spending.

Other mandatory spending (welfare, food stamps etc.) is actually projected to decrease from 2.5% to 2.2% of GDP. Good luck seeing that happen.

The biggest increase is going to involve paying interest on the federal debt. It is projected to increase from 1.3% of GDP in 2014 to 3.3% in 2024. That is $344 billion of additional costs in today's dollars.

How much is that? It would take a doubling of corporate income taxes across the board to just pay for that increase. Or a 25% across the board hike in individual income taxes. Or a 33% across the board increase in employer and employer FICA taxes. All of that to pay for something that provides no value whatsoever to those paying the taxes! The interest on the money that was borrowed to finance past spending will be a distant memory to those taxpayers when the bill comes due.


The bottom line is that we are on a collision course with a catastrophe with our federal budget. Something is going to have to give over the next ten years. The government has nothing to give. They only have the power to redistribute.

Therefore, the American people are going to be the ones giving. Taxpayers will almost surely have to give more. Those with entitlements and those receiving mandatory spending amounts may also have to give something up. There is no other answer unless we are at the end of the federal government as we know it. I hope that is not the case but the numbers are leading us to some stark choices.

A government that is not spending any money on government, is not a government.

What choices are we willing to make to continue to have a government?
Posted by BeeLine at 8:11 PM