What Happened To "We The People"?

We the People of the United States, in Order to form a more perfect Union, establish Justice, insure domestic Tranquility, provide for the common defence, promote the general Welfare, and secure the Blessings of Liberty to ourselves and our Posterity, do ordain and establish this Constitution for the United States of America.

The preamble to the Constitution lists five significant priorities in order "to from a more perfect Union". Our founders specifically stated that they wanted to "establish Justice", "insure domestic Tranquility", "provide for the common defense", "promote the general Welfare" and "secure the Blessings of Liberty to ourselves and our Posterity".

This seems to suggest that when they referred to general welfare they were considering those things that would be generally available to all. They were not considering items that would make some people winners and other losers at the hand of the federal government.  What are items of general welfare? Roads, post offices, the coining of money, standard weights and measures and the regulation of international and interstate commerce are specifically mentioned in Article 8 as is the erection of forts, dockyards and other needful buildings.

You could probably also consider the national park system, public health programs, public transportation  and other broad-based programs available to the public at large to clearly be within the spirit of promoting general welfare.

How much of the federal budget is spent on defense, justice, police and internal security and other programs that benefit the population at large today?  Less than 1/3 of the budget is spent on what the Constitution established as the big priorities.  In 1945, we spent 97.6% of the budget on these items.  In 1960, we spent about 75% on these priorities. As late as 1990, we still spent the majority of the federal budget on these government roles.

Direct payments to individuals now account for 67.9% of all federal expenditures in the federal budget. In dollars, that is $2.57 trillion out of $3.77 trillion in total spending.

In other words, we are spending twice as much on these "special interest" payments as we do on defense, justice, roads, research, national parks and everything else that is for the overall "public interest"---combined!

If Defense spending is excluded (arguably the one function of the federal government that is probably most essential), direct payments to individuals account for 82% of all federal spending. 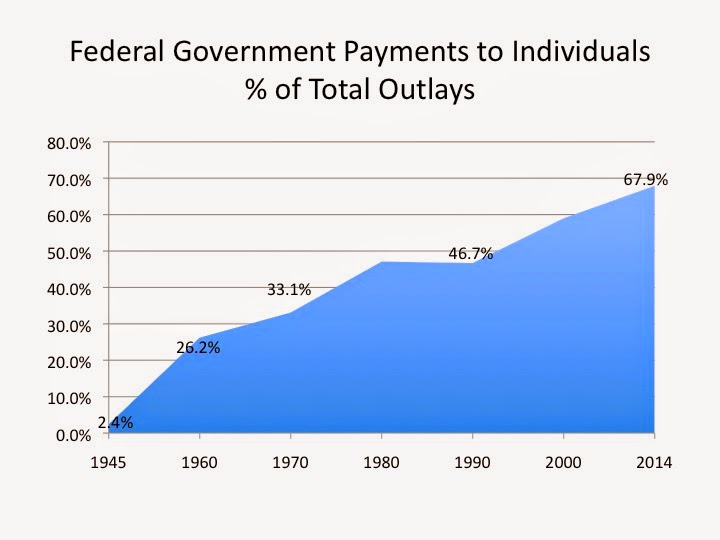 What are "payments for individuals"? These are federal government spending programs designed to transfer income (in cash or in kind) to individuals or families.  This includes Social Security, Medicare, Medicaid, Veteran's Benefits, Welfare, Food Stamps and Student Loans.  It does not include salaries to government workers or the military as these are considered to be payments in return for services provided.   Therefore, "payments for individuals" effectively represent what amounts to the redistribution of income from one person to another with the federal government serving as the middle man.

These are not outlays for the common defense, the common good, public works or public safety. These are government payments that are intended to benefit select individuals based on their age, their income, their health or any one of a number of other distinctions.

Where is this money being spent and who is receiving it?

Social Security and Medicare account for about half of it.  However, almost $1 trillion is being spent on direct or indirect forms of welfare---Medicaid, food stamps, disability, public assistance, housing assistance, unemployment assistance and student loans.

This chart shows the breakdown of payments of individuals in the 2014 federal budget. 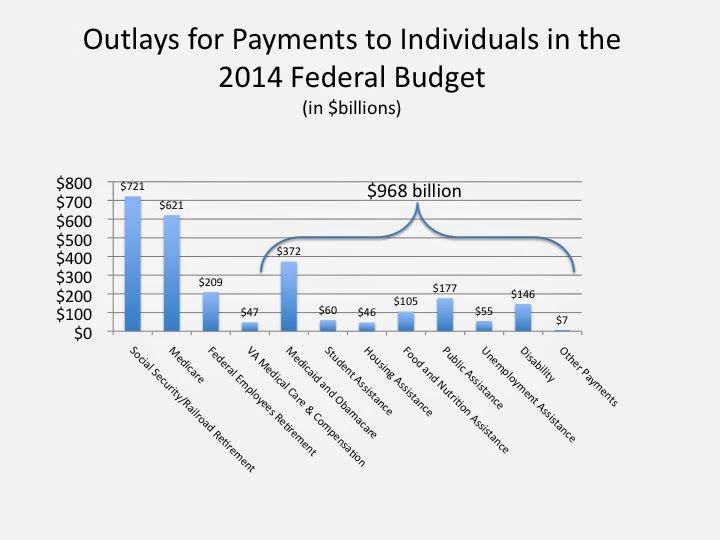 By comparison, in 1974 the federal government spent just $120 billion on outlays for payments to individuals in the federal budget.  The various forms of welfare (Medicaid, unemployment, food stamps etc) have grown from $41 billion to $968 billion (an increase of 23.6x between 1974 and today.) 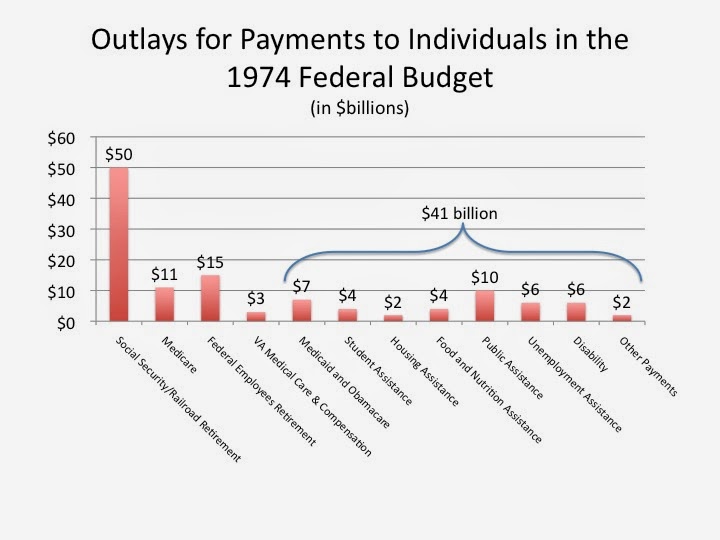 The chart below shows the increases in the major categories of payments to individuals in the federal budget between 1974 and 2014 in comparison to total spending, inflation, population and the Defense budget.

Interestingly, Medicare and Medicaid are both up over 50x in 40 years. Looking at these numbers who can honestly believe that more government money and regulation in the healthcare market through Obamacare is going to do anything but further increase costs? That is double the increase of any other spending category. 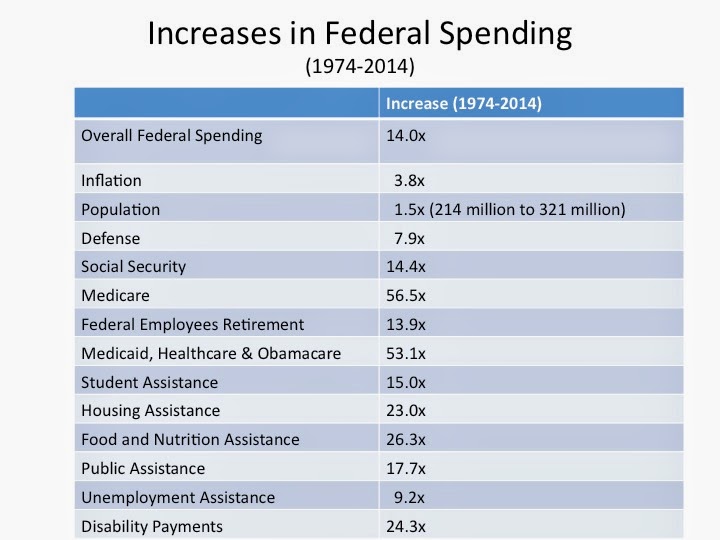 I am not suggesting that all of these programs are ill-considered or bad.  After all, Social Security and Medicare are there for everyone.  Workers pay into these programs and deserve a return on their "investment" without someone drastically changing the rules on them just as they near retirement.

However, we all need to look in the mirror and ask ourselves how we have allowed what began as well-meaning social safety net programs to reach the point that they now account for over 2/3 of federal spending?

What began as a social safety net has become a societal noose around our necks!

I don't believe that our Founding Fathers would believe it.

Is there anyone who still believes in what "We the People" means anymore?  It seems to be clear that the people we have been electing for the last couple of generations don't.

All of the data on federal government spending is taken from Budget of the U.S. Government, Fiscal 2014 Historical Tables.
Posted by BeeLine at 9:12 PM