There are many things in this world that can be of great benefit but are also of great danger if they are not kept under control.

Fire used in a controlled manner can help cook our food and warm us. Fire that is out of control can wreak unspeakable damage.

We need water to nourish us and irrigate our fields of food. However, a flood of water can wipe away those fields in an instance.

The same can be said of debt. It can assist us in building a business, purchasing a home or completing our education. However, when debt is not quickly repaid it can destroy just as easily as any natural calamity. Compound interest crushes anyone who does not quickly get out of its path.

There are always two parties to any debt transaction. A lender and a borrower. However, many times there is a third party--the middleman or underwriter--who collects a fee for facilitating the transaction.

Many financial institutions have recognized that it is much better to be the middleman in a debt transaction than a lender. They take no credit risk and just take a fee for facilitating the loan or packaging a bunch of loans and finding willing lenders.

The 2008 credit crisis was really driven by this activity as packages of real estate loans were packaged together with little care about what went into the packages. After all, it was all about the fee income that went with putting the loan package together.

We have been living with the after effects of that debt debacle for six years. The economy is still sputtering, tens of millions are unemployed or underemployed and the Federal Reserve has pumped trillions of dollars into the money supply to prop up the economy, asset values and keep interest rates low.

How is all of this working out for the three parties involved with debt?

Let's take a deep 3-D perspective of some of the ramifications of the low interest rate environment that has been manipulated and sustained with the help of the Federal Reserve and other central banks around the world.

Borrowers are being paid less for the risk they take in loaning their money than just about any time in history. For perspective, look at this graph showing long-bond yields in the U.K. from 1750 to 2014. That provides a 250 year perspective on how low interest rates are. 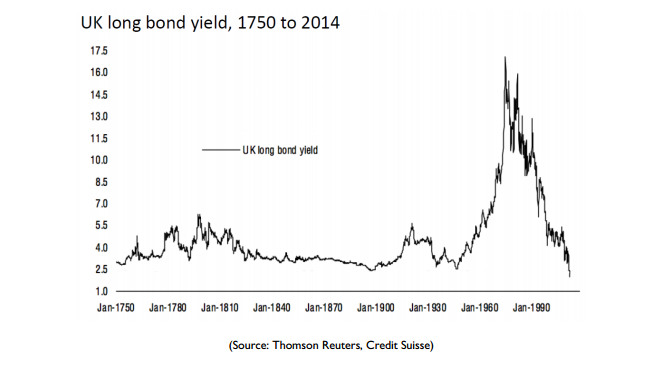 This is also evident in junk bond yields, the riskiest form of corporate borrowing which have been trading near record lows the last two years. This is a graph of the Barclays U.S. Corporate High Yield Bond Index through June 30, 2014. As of today, the yield has increased to 5.87% 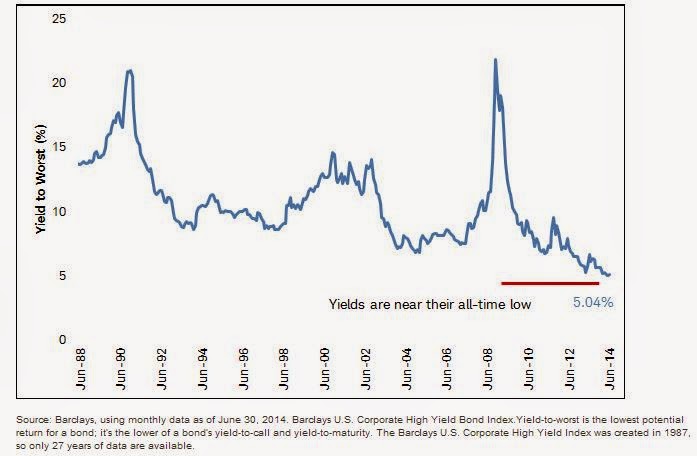 Here are 6-month Certificate of Deposit interest rates going back to 1964. The current average national rate is .01%. 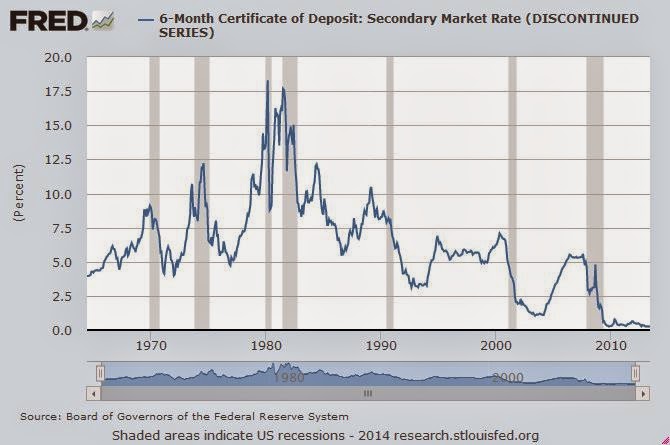 It is pretty clear that lenders are not doing real well in the current environment.

What about borrowers? There clearly are winners here with the low interest rate environment helping businesses and home owners in particular. However, it is not as benefiting consumers as much as you would expect. The underperforming economy over the last few years and declining real incomes continues to squeeze household budgets and, after a small retracement in 2008-2009, consumer debt is once again on the rise. This is a graph of consumer loans at commercial banks. This debt is almost 50% higher than it was in 2011. 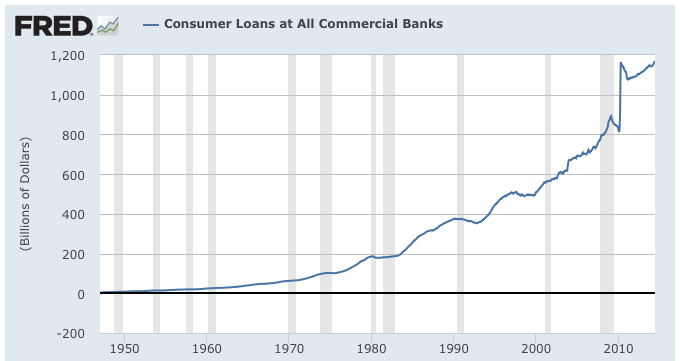 This is a broader view of household debt including mortgage, student loan, auto, credit card and home equity loans to the grand total of almost $11.7 trillion.


You might have also seen or heard of this report by the Urban Institute last week on how well consumers are coping with this debt in their household budgets.

Roughly 77 million Americans, or 35 percent of adults with a credit file, have a report of debt in collections. These adults owe an average of $5,178 (median $1,349). Debt in collections involves a nonmortgage bill—such as a credit card balance, medical or utility bill—that is more than 180 days past due and has been placed in collections.

Look no further than the federal government. 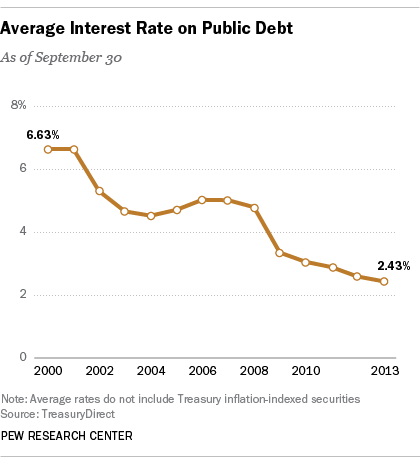 However, what would be the impact on the federal budget if interest rates were to rise?

Consider that if interest rates were to rise to their historical average (6.85%) the federal government would be spending an additional $750 billion per year on interest expense. 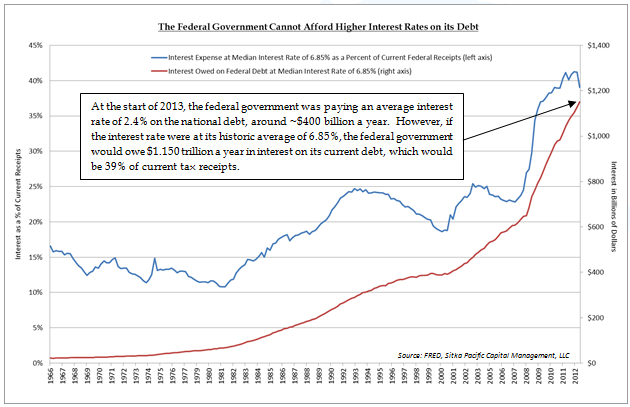 Let's put that it in context.

Total projected individual income tax receipts for 2014 are $1.4 trillion. That means that individual income taxes would have to be increased by over 50% to just pay for interest on the federal debt. Of course, taxpayers would receive absolutely nothing in return. The interest would merely be paying for past spending well back in time.

If you don't like the idea of raising taxes to cover the added interest cost, how about cutting something in the budget to pay for it?

The Defense budget this year is $627 billion. You could cut the entire amount and still not have enough to pay the increased interest bill.

You don't want to do that?  How about Medicare? $531 billion. Still not enough by itself.

The fact is that you could cut out the largest single item in the federal budget (Social Security Old-Age and Survivor Benefits) at $713 billion and still not be able to cover this increase in interest costs.

Current interest rates have given a false sense of security to many borrowers. There is real danger ahead.

That leads us to the final perspective of the players in the debt scene---the real winners in all of this---those middlemen.  The Wall Street bankers who but the borrowers and lenders together---for a fee.

Of course, you might recognize those winners today as being the same players that nearly brought the whole house of cards down in 2008. And most of those names would no longer be in business but for the bail-outs compliments of American taxpayers.

Here are the biggest beneficiaries of the low interest rates as borrowers have lined up to get some of the "cheap" money that is available.

In total, the top 10 debt bookrunners have pocketed a mere $12.2 billion in manager fees for their efforts in just the first six months of 2014.

There is little question that in the 3-D world of debt that is the best place to be right now. Right in the middle.

That's great work if you can get it.

I just hope that all of this leads us to a place where more people can find any type of work.  And we don't end up in a place where we are going to see a whole lot more worry and "work-outs" on the other side of all of this.

I don't know about you but I don't like what I am seeing with this 3-D view of debt. It's a little scary.