The Elephant In Ferguson

In light of what has been going on in Ferguson, Missouri I thought it might be appropriate to once again republish a blog post that I wrote last year right after the George Zimmerman trial.

In that case, there were conflicting accounts of what happened. The same appears to be the case with Michael Brown and Officer Darren Wilson. We do know that the 18 year old Brown died from at least six shots fired by Wilson even though he though the young man was unarmed.

Does that automatically mean that Wilson is guilty? It is not supposed to in our system of justice. That is why there are internal police investigations, grand juries and criminal trials to sort out the evidence. That is why someone is supposed to be presumed innocent until proven guilty.

The bigger question is why is this happening all over again? Why is there such a rush to judgment? Why can't people wait for the facts and trust the system?  Why is there bias?

I wrote about this right after the Zimmerman acquittal and I think it bears repeating again because nothing seems to change.  This post is as relevant today as it was last year.

The Elephant In The Room
(Originally published July 21, 2013)

In the aftermath of the George Zimmerman acquittal there is a lot of talk about racial bias in the judicial system.  I have heard many African-American commentators argue on cable tv that there is inherent bias throughout the police and justice system against African-Americans.  They cite the Zimmerman verdict as just one more example of that bias.

I agree with that general conclusion.  However, I think it is misplaced in trying to make that point in the Zimmerman case. I have no doubt there is bias at times if you want to use that word.  If you are black in America there is undoubtedly a greater chance that you will be pulled over in a car.  You will be looked at with greater suspicion in a convenience store.  You will find it harder to get a fair shake in a court room.

It is not right.  However, as I wrote recently, profiling and stereotyping are fundamental to the way the human brain operates.  It is not fair but that is the way the brain is wired.  We are too quick to jump to conclusions based on past experiences, emotions, events, associations and their consequences.

The elephant in the room that no one wants to talk about is why does that bias exist?  Why do we keep hearing about a police and a justice system that is unfair to African-Americans?

These statements are particularly interesting when you look at who is overseeing these systems today at the federal level.

The President of the United States is an African-American.

The Attorney General of the United States is an African-American.

They have both been in place for almost five years.  Why all this talk of institutional bias when you look who is on top of our governing and justice system today?

Here are the cities with the highest violent crime rates in the United States according to the FBI.  The majority of the cities are headed by an African-American.

3. Oakland, California (African-American Chief of Police, Howard Jordan stepped down in May and was replaced by an interim Chief who is white.)

Therefore, we hear about the bias of the "system" but that "system" is increasingly being overseen by African-Americans.  The old argument of institutional bias just does not add up as it might have at one time.  If the deck is stacked, who is stacking the deck?

We also hear outcries that Republicans are somehow responsible for bias in the system and they simply don't care about the plight of African-Americans.  However, if you look at the Mayors that oversee the 30 largest U.S. cities, only two are Republicans. (Gregory Ballard in Indianapolis and Betsy Price in Fort Worth.)

What is the real elephant in room?  Let's look at the crime statistics.  In order to do that I went to the most recent Statistical Abstract of the United States.  It helps you better understand the dimensions of the issue.

First, it should be recognized that crime rates have decreased substantially in the last 15 to 20 years as this first chart demonstrates.  This is a very positive development especially in light of the challenging economic environment. 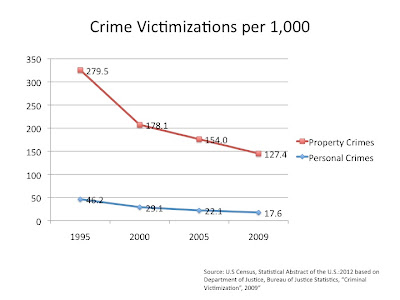 Blacks are much more likely to be victims of crime than Whites or Hispanics. 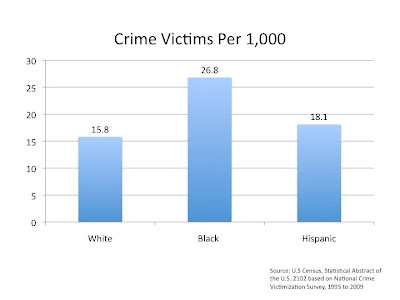 This is particularly the case for murder.  In fact, the chances of being murdered are over 5 times greater if you are Black than if you are White.  Note that there is currently no data for Hispanics in the next few charts because the federal government right now consider Hispanics to be an ethnicity rather than a race. This will change next year in the collection of this data. 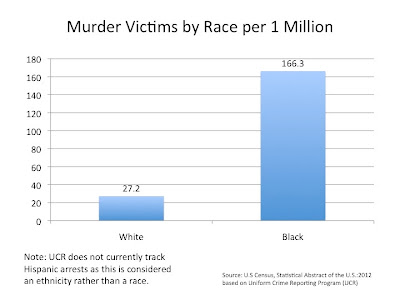 Who is committing these crimes?  Blacks commit almost 5 times as many violent crimes (murder, manslaughter, rape, robbery and aggravated assault) per 1,000 population as Whites according to FBI data based on arrests for violent crimes. 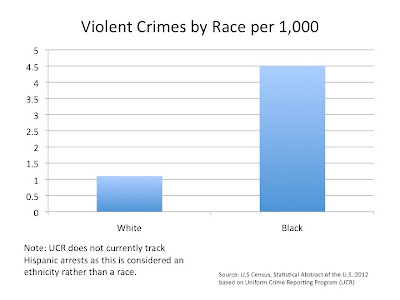 What about overall arrests that are made for both violent and property crimes?  The incidence of arrests for Blacks is over twice what it is for Whites on per capita basis.  In fact, this data suggests that, on average, there is one arrest each year for every 12 Blacks in the U.S. 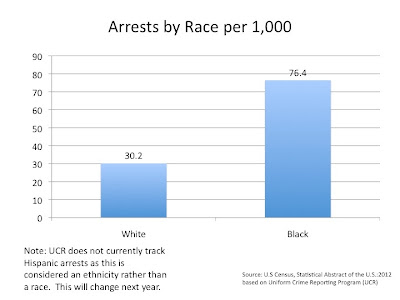 What about hate crimes?  The Justice Department also tracks this data.  There are many more hate crime incidents perpetrated against Blacks than Whites.  However, these incidents pale in comparison to the hate that is spewed towards Jewish people.  How come we never hear about this?

In fact, Jewish people have almost six times the chance of being the victim of a hate crime as an African American and over four times the chances of a Muslim in this country!  For some reason these facts just never seem to make the evening news. 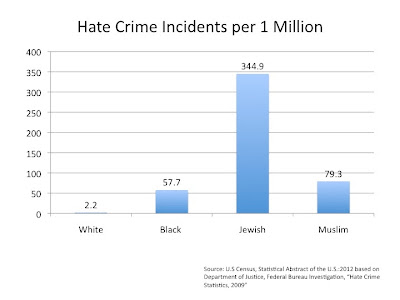 It is important to remember that the vast majority of crime is committed against people of the same race. Crime is a function of proximity and opportunity.  For example, from 1976 to 2005 according to this article in the Daily Beast, 94 percent of Black murder victims were killed by Black offenders.  At the same time, 86 percent of Whites were killed by other Whites.

However, what about interracial crime, white-on-black attacks and the reverse?

Patrick J.Buchanan wrote about this in a recent column.

After researching the FBI numbers for “Suicide of a Superpower,” this writer concluded: “An analysis of ‘single offender victimization figures’ from the FBI for 2007 finds blacks committed 433,934 crimes against whites, eight times the 55,685 whites committed against blacks.

Interracial rape is almost exclusively black on white – with 14,000 assaults on white women by African Americans in 2007. Not one case of a white sexual assault on a black female was found in the FBI study.”

Though blacks are outnumbered 5-to-1 in the population by whites, they commit eight times as many crimes against whites as the reverse. By those 2007 numbers, a black male was 40 times as likely to assault a white person as the reverse.

Today, 73 percent of all black kids are born out of wedlock. Growing up, these kids drop out, use drugs, are unemployed, commit crimes and are incarcerated at many times the rate of Asians and whites – or Hispanics, who are taking the jobs that used to go to young black Americans.

Buchanan points out the real elephant in the room.

As I stated above, discrimination and bias exists against Blacks in the criminal justice system and in their daily lives. It is disingenuous for anyone to deny this. However, all of the energy of the African American community about this problem seems to be only directed outwards.  I don't see much energy devoted to looking inward for solutions to the problem.

William Galston, who was an advisor to President Clinton, has spent a good part of his career studying the causes of poverty.  He concluded that in order to avoid being poor you just needed to do three things, (1) graduate from high school, (2) wait until getting married to have children, (3) wait until age 20 to have children.  His research indicated that only 8 percent of young people who followed these rules ended up poor.  However, breaking just one of these rules means a 79 percent chance of ending up below the poverty line.

Crime is largely a function of poverty and poor home environments.  The absence of a father in the home is a significant factor in this equation.  That is why I think it is especially ironic that there is so much energy being devoted to enabling gay marriages in this country but you hear almost nothing about encouraging African Americans to marry before having a child.

Failure to complete high school is almost a certain path to poverty in this day and age.  We are spending massive amounts of money on welfare and other programs to help the poor but you hear little about the massive failure of young African Americans to graduate from high school.  We are spending enormous sums of money on the symptoms but pay little attention to the underlying disease.

If we look at the data above, and you consider the way the human brain works and the role heuristics plays in our thinking, bias, racial profiling and stereotyping is going to occur.  It is not right and it is not fair but that is the way the human brain is wired.  It is always looking for shortcuts based on past experience and associations.  A lot of the time this is very helpful in assessing things.  However, it can also lead to generalizations, stereotypes and bias that lead us astray.

The only sure way to change that is from the inside-out in the African-American community. Discrimination, bias and stereotyping are not unique to Blacks. For example, prior to the 1950's, Asians who lived in the United States were stereotyped as cheap, poor, uneducated laborers.  Products from Asia were derided as nothing more than cheap junk.  That stereotype no longer exists.  It literally has been turned on its head.

Today, students in high school and college cringe when they see Asian-Americans entering their classrooms on the first day of class.  American businesses have learned some hard lessons from their Asian counterparts.  The old stereotype is gone.  That change did not occur because people just started to think differently one day.  It changed because they were forced to change their thinking because of what they experienced and the behaviors and results they saw from greater and greater numbers of Asians they came in contact with.

Someone needs to start talking about the elephant in the room in the African-American community. My hope would be that it would be the President of the United States. I think that was the hope of most Americans when he took office.  We were looking for a uniter and all we got was a divider.  I still have hope.  It just doesn't look like he is going to change.  That might end up being the biggest disappointment of the Obama Presidency when all is said and done (unfortunately, that would be saying a lot). 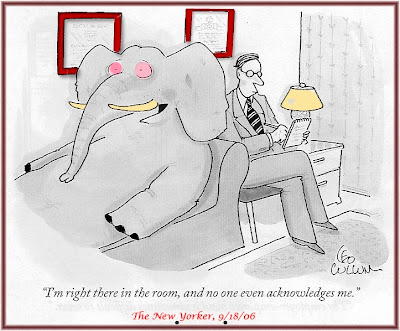