I have written before that when the history of the Obama era is written, I think one of the ironies that historians will focus on will be the level of support that younger voters provided for Obama that will clearly be seen as having been against their self-interest when viewed in the fullness of time.

Voters do not typically vote against their self-interests. That is why the unions and government workers who believe in big government and big spending typically vote for Democrats.  It is also the reason that small business owners and investors who are concerned about high taxes and government regulations vote for Republicans. It is why young voters in the Vietnam era voted for Eugene McCarthy and George McGovern and why generations of African-Americans voted for Republicans after the Civil War.

Obama carried two-thirds of voters aged 18-29 in 2008.  He carried this demographic with about 60 percent of the vote in 2012.  When you consider the following it is hard to understand why.

We know the obvious. Over $6 trillion in national debt has been added in the Obama years.  The President's budgets over the next two years look to be more of the same. His recent budget submission to Congress projects another $500 billion in debt for next year and does not even attempt to balance the budget over the next ten years.When Obama leaves office these young voters will be inheriting almost $20 trillion in federal debt that they will have to pay for from future taxes.

Unfortunately, Mr. Obama will not be responsible for paying the interest and principal on these debts. That will fall largely on the Millennial generation, those born between the early 1980's and early 2000's. The very voters who overwhelming voted to put Barack Obama in office---twice!

This generation has already had its challenges. The first Millennials were just trying to enter the workforce in substantial numbers when the Great Recession hit in 2008. Millennials are struggling with a tougher employment outlook than older generations. Workers 25- to 34-years-old have an unemployment rate of that is almost one-third higher than Americans between 35 to 44, according to the Bureau of Labor Statistics.

They also have an estimated savings rate of negative 2% according to The Wall Street Journal which cited a study by Moody Analytics. This compares to a 3% savings rate for the 35-44 age group and 6% for those between 45 and 54.

You might think that young people have always struggled with putting money away. However. Moody Analytics found that 25-34 year olds were saving 5.2% in 2009. The weak job market and increased student debt are clearly responsible for additional pressure on the pocketbook of the Millennials.

However, I came across another interesting factor that seems to be at play in raising havoc with Millennial budgets that you don't hear about---the changes in spending patterns of Americans. And those changes in how people spend their money have been particularly disadvantageous for younger people.

This is a chart from The Wall Street Journal that shows changes in spending patterns for Americans between 2007 and 2013. Spending pattern changes take account of both price increases but also behavioral adjustments required due to rationing limited income sources. 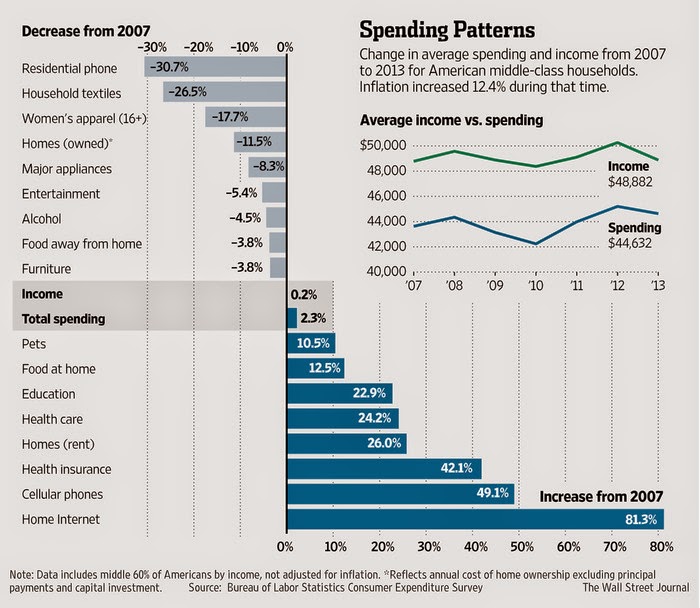 Overall, income for Americans was up only 0.2% between 2007 and 2013, but total spending was up 2.3%.  This is a chart that graphically illustrates the middle class economic squeeze.

However, when you look at the spending categories that have had the largest increases, you particularly see just how poorly the last six years have been to Millennials.

What are some of the spending categories that are most important to this age group?

You add in the requirement to buy health insurance under Obamacare  (+42.1%), which a good number of this age group were not purchasing before, and you can readily see the financial stress the Millennials are under.

When you look at some of the categories where spending has been reduced, most were of no benefit to this age group whatsoever.


Unfortunately, the worst is apparently still to come for the Millennials.

What are they going to do when faced with much higher taxes and interest costs to pay for all the debt that has been accumulated during the administration of Barack Obama?

The poor economy and low interest rates are keeping millions of Baby Boomers in the workforce and blocking their career advancement. They almost certainly will pay much more into Social Security and Medicare than they will ever get out of it. Or they will end up caring for Mom and Dad somewhere down the line.

However, almost 2 out of every 3 of them has no one to blame but themselves. They had a choice to make for their future but were more enthralled with "cool" than with "competent".

It is something I don't understand. It is something that I don't think history will understand. For the sake of their own future, I hope the Millennial Generation will soon understand what is happening to them and demand real change.  It is their only real hope to create their own history. If not, they will just pay for ours.
Posted by BeeLine at 9:59 PM