It has now been almost seven years since the effective federal funds rate established by the Federal Reserve was over 1%. I am not aware of any other period in economic history that interest rates have been so low for so long.

Here is the FRED graph showing the federal funds rate from the beginning of the data set in 1954. 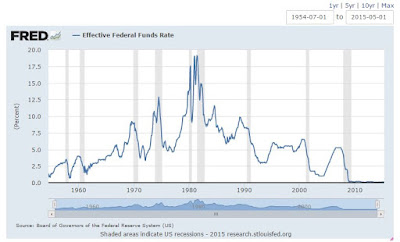 If that period is not long enough for you, here are a few graphs using a longer time perspective that I came across in a paper on The Equilibrium Real Funds Rate by James D. Hamilton, Ethan S. Harris, Jan Hatzius and Kenneth D. West.


Nominal interest rates in the United States since 1855.

Interest rates in the United Kingdom since 1800.

Nominal interest rates in Germany since 1858.

To say that the monetary and interest rate policy by the world's central bankers is in uncharted waters is an understatement.

How long can this be sustained?

What happens when the air is let out of the balloon?

What happens upon a Greek default?

Have the central bankers boxed themselves in so there is no graceful exit?

These are just a few questions circulating right now.

At some point there will be a lot more interest about interest. That usually comes when people also start being more concerned about the return of their money than on the return on their money. Or when the pernicious effects of inflation start to be better understood when things start heating up.

There is inherent risk in extending credit to someone else.  The record of interest rates shows that the compensation for that risk is not 0.12% or anything close to what we have today based on any historical standards.

Has the world changed that much? Have the laws of economics been displaced?

I don't think so.

When it turns, who will get burned?