Robert's Rules of Order is a book "containing rules of order intended to be adopted as a parliamentary authority for use by a deliberative assembly." 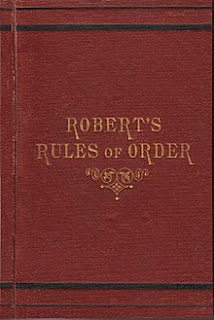 Apparently Chief Justice John Roberts and a majority of the U.S. Supreme Court have decided to develop their own legislative rules of order so that it can save the U.S. Congress from itself and the Affordable Care Act from oblivion.

Roberts has taken up the pen writing for a majority of the Supreme Court twice by concocting and contorting opinions that try to affirm a law that deserves no affirmation. He first turned a penalty into a tax to save the law in the original ACA case and he now has turned the federal government into a state in King v. Burwell.

It is all quite remarkable.

Especially for a body that is supposed to interpret the law rather than legislate from the bench.

The Supreme Court, and Chief Justice Roberts in particular, seems to believe its role to be more concerned with political and social order than its constitutional role to provide checks and balances between the three branches of government and assaults on constitutional order.

I found this portion of the majority opinion written by Justice Roberts to be especially remarkable where he defends the decision to allow credit subsidies on the federal exchange even though the statute clearly states that subsidies can only be provided by "exchanges established by the state".

"Those credits are necessary for the federal exchanges to function like their state exchange counterparts, and to avoid the type of calamitous result that Congress plainly meant to avoid," Roberts wrote.


I almost laughed out loud when I read this rationale.

I also would like to ask Justice Roberts this question.

If Congress plainly meant to avoid a calamitous result why did they not plainly make that clear when they wrote the statute and passed it into law?

This seems to me to be an open and shut case if the Court was doing its job and not that of Congress.

Justice Antonin Scalia blasted the majority ruling in his dissent, in one part suggesting the healthcare law should now be called "SCOTUScare."

"Rather than rewriting the law under the pretense of interpreting it, the court should have left it to Congress to decide what to do about the act's limitation of tax credits to state exchange," Scalia wrote, joined by conservative justices Clarence Thomas and Samuel Alito.

Leave Robert's Rules of Order to maintain order in the deliberative process.

Do not use Justice Roberts' Rules of Order to save bad legislation.