Languages of the World

I bet you didn't know that there were 7,102 known languages spoken in the world.

I didn't either until a BeeLine reader sent me the interesting infographic below that was originally published in the South China Morning Post.

23 languages make up the mother or native tongue for 4.2 billion of the 7.2 billion  people on planet earth.

You might also wonder what is the difference between "mother tongue" and "native language" as I did.

Mother tongue and native language have similar meanings and are often used interchangeably but they have a subtle difference.

Native language refers to the language of the area the person grows up in.

Mother tongue refers to the language of the family you grew up in.

The infographic breaks these 23 major languages down by the countries they are spoken in and the numbers of native speakers of the language. You can go here to see a larger, higher resolution image of the infographic as it first appeared in the South China Post. 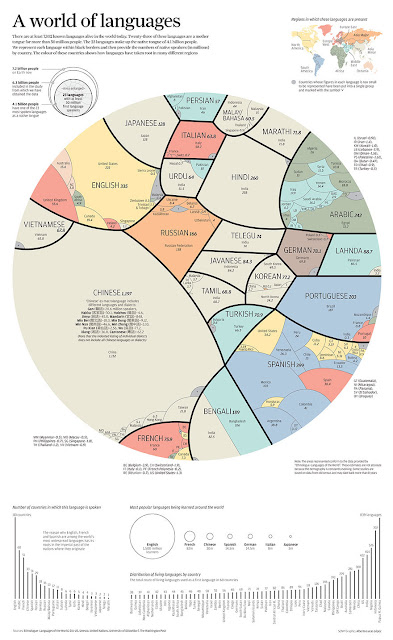 More people speak Chinese as their native language than any other. Chinese is the native language for some 1.2 billion people. Of course, there are an assortment of different Chinese dialects within the Chinese language with Mandarin Chinese the most prevalent with almost 850 million native speakers.

Spanish has 399 million native speakers and English has 335 million for second and third place in the world.

It is no contest when it comes to the most popular languages being learned around the world. There are 1.5 billion English learners around the world who are working to add it as a second language. French is second at 82 million and Chinese is third at 30 million. Spanish and German are being sttudied by 14.5 million people.

One country in which I am sure that Spanish is no longer as popular as a foreign language in the classroom as when I was in high school is the United States.

The reason? So many people in the United States now speak it as their mother tongue. It is not a foreign language to many in this country.

In fact, this recent report in The Washington Post indicates that there are now more Spanish speakers in the United States than in Spain! This includes those in which Spanish is their native tongue as well as those that are bilingual. 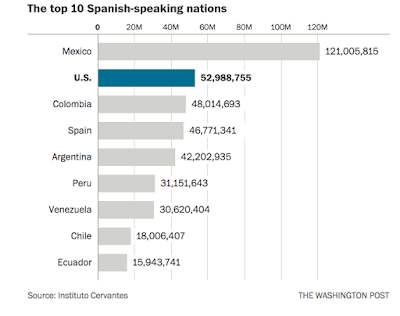 Of course, if you want exposure to as many of the world's languages in the smallest possible geographic area, head to New York City.

New Yorkers speak 180 different languages. How is that known with such specificity? It is because the U.S. Department of Education and NYC's own regulations require that the NYC public schools must provide translation and interpretation services to all parents of students. This is the number of languages that the NYC schools are trying to deal with in parent requests.

In fact, nearly half of the students in NYC public schools now speak a different language than English at home!

It is a far different world than when I grew up. The new world of languages is just another example of how different it is.