The use of face masks in the battle against Covid-19 has been controversial from the beginning.
We were first told by the CDC and the Surgeon General that wearing face masks were not necessary.

That advice was reaffirmed by the Surgeon General on March 31 in an interview on Fox & Friends in which he stated he was confirming that the most current recommendation of both the WHO and CDC was for the the general public to not wear masks.

What the World Health Organization [WHO] and the CDC [Centers for Disease Control and Prevention] have reaffirmed in the last few days is that they do not recommend the general public wear masks.
… On an individual level, there was a study in 2015 looking at medical students and medical students wearing surgical masks touch their face on average 23 times … We know a major way that you can get respiratory diseases like coronavirus is by touching a surface and then touching your face, so wearing a mask improperly can actually increase your risk of getting disease.

This still continues to be the guidance that is provided by many European countries.
Here are a few samples from the Scandinavian countries.
Denmark. 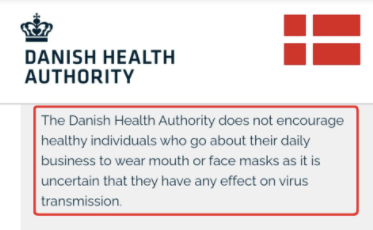 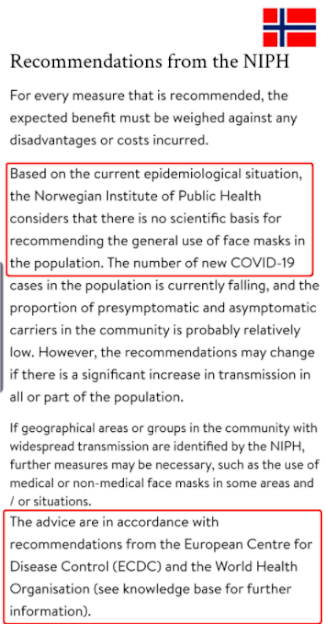 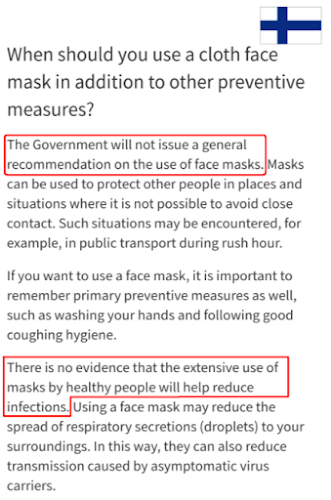 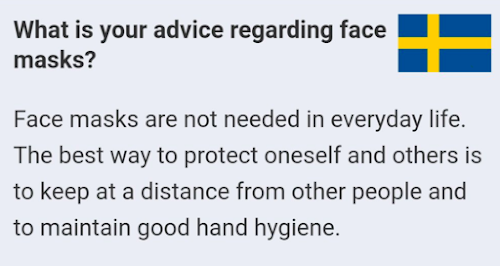 In April the CDC changed its view and recommended the use of face masks in settings where it is difficult to maintain social distancing and especially in areas with significant community transmission.
In June the WHO revised its recommendations and advised the use of face masks for those over age 60 or with underlying medical conditions in areas with community transmission of the virus and the use of masks by the general public where there is widespread transmission when social distancing is not possible (large crowds, public transit, etc).
More and more states are mandating that face masks must be worn in public. North Carolina, Nevada and Washington all added this requirement last week.
There are now 18 states that have a face mask requirement.
1. California
2. Connecticut
3. Delaware
4. Hawaii
5. Illinois
6. Kentucky
7. Maine
8. Maryland
9. Massachusetts
10. Michigan
11. Nevada
12. New Jersey
13. New Mexico
14. New York
15. North Carolina
16. Pennsylvania
17. Rhode Island
18. Washington
The District of Columbia also requires face masks be worn in public.
Interestingly, all of these states have a Democrat governor except Massachusetts and Maryland. However, those are clearly blue states in almost every other instance.
Joe Biden also stated last week that he would make wearing a face mask compulsory if he was elected President. 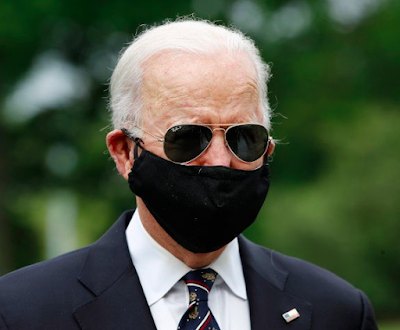 What I find interesting in all of this is that the face mask issue seems to have become more a political issue that anything else.
All of the Democrat governors and Joe Biden claim that they are following science in requiring the use of face masks.
However, the science was exactly the opposite a couple of months ago.
Controversy surrounding the use of face masks in a pandemic is nothing new.
It was also very controversial in the Spanish Flu pandemic in 1918/19. You would think that after over 100 years the science would be settled a little better.
For example, San Francisco was very aggressive in mandating face masks in the early stages of the Spanish Flu pandemic in the Fall of 1918. Fines and jail time were used to enforce the mandate.
San Francisco had the mandate in place for about a month in October and November of that year and it made it through the first wave of the flu in fairly good shape compared to most cities.
However, when the mandate ended people threw away their masks and went back to their normal lives very quickly thinking that the masks had protected them.
By December the city started seeing new cases and people put on their masks again. The city instituted another mandate in January but many people rebelled at that time. An "Anti-Mask League" was formed by a number of influential citizens, physicians and even some of the city's Board of Supervisors who had put the mask mandate in place to begin with.
On January 25, 1919 4,500 people gathered in a skating rink hosted by the league (presumably without masks) designed to put an end to the law regarding face mask.
The law was rescinded a week later as infections started to fall.
However, when the final numbers were totaled, San Francisco had ended up with one of the worst death rates of major U.S. cities even though it had a mandatory face mask requirement and most other cities did not. 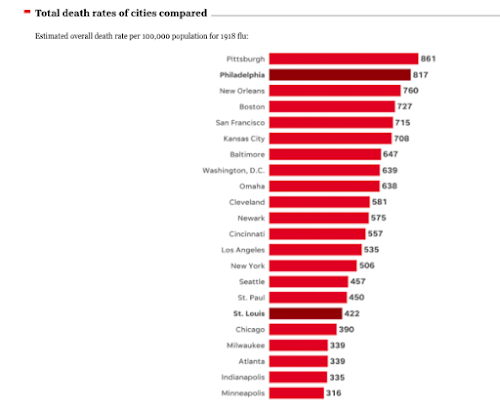 These results caused the secretary of the California State Board of Health to examine why face masks failed in lowering the infection rate in San Francisco despite their widespread use. He ultimately found five key reasons that they did not achieve the intended result.
1. Poor quality homemade masks
2. Masks gave people a false sense of security
3. People wore their masks incorrectly
4. People wore their masks outside in public but did not wear them indoors in private offices or with gatherings of friends. Infectious droplets are more likely to be dispersed indoors in contained spaces than in large ventilated spaces.
5. Gauze was the favored fabric for medical uses a century ago but later experiments showed that it was not very effective against respiratory droplets.
I would like to think we have advanced the science in 100 years but the same concerns seem to be  mentioned today (with the exception of gauze face masks) that were listed as reasons that face masks did not prove that effective in controlling the virus then.
The CDC recently announced that they may soon be updating their guidance on masks based on additional research studies. It will be interesting to see what they have will have to say next on the subject.
A positive story on mask wearing came out of Missouri at the end of May where two hair stylists who had Covid-19 came into close contact with 140 clients. All wore masks (as did the stylists) and none became sick.
The research I have seen suggests that masks are much more effective in stopping an infected person from infecting someone else than it does preventing a healthy person who is wearing a mask from catching the virus. That is because masks are more effective at blocking large respiratory droplets at the source which then separate and become smaller in the air. Masks are not as effective at blocking these smaller droplets which may infect a healthy person wearing the mask.
Let's put the Covid-19 virus in context to understand what we are up against. Simone Gold is a physician and lawyer who recently wrote an op-ed for USA Today questioning the usefulness of masks.

The Covid virus was supposed to be contained in the kind of lab where people wear astronaut suits and go through triple sealed doors. It is a con of massive proportion to assert that now, having escaped those environs, a bandana will magically do the trick.

After all, size matters.

The pore size of cloth face coverings range from ~ 20-100 microns.   The Covid virus is 200-1000x smaller than that, at 0.1 microns. Putting up a chain link fence will not keep out a mosquito. Even the most esteemed medical journals admit their purpose is to calm anxiety. “Expanded masking protocols’ greatest contribution may be to reduce the transmission of anxiety …”

You can see from everything above that, much like almost everything to do with Covid-19, there is a lot that is not well understood about the usefulness of face masks. There certainly is no settled science.
Am I a member of the 2020 version of The Anti-Mask League?
No.
I think that a face covering can be helpful in certain circumstances. I typically wear one when I go into a store that I know will be crowded. I figure it can't hurt for a limited time. Something is probably better than nothing. I also don't want to suggest that I don't care about anyone else's welfare.
However, I question the value of wearing it over long periods of time. It simply cannot be healthy to restrict your breathing that way. Wearing the mask for longer periods also greatly increases the chances you are going to be touching it or your face in trying to adjust the mask. That is undoubtedly the worst thing anyone can do if they do not want to catch the virus.
I can't count how many times I have seen someone wearing a mask (often a store worker) who has it pulled down so it covers their mouth but not their nose. The same for people who are constantly adjusting it.
I also see no value whatsoever in wearing a mask outside. Or in a car driving alone. I see people walking alone with no one around wearing a mask and I see people with a mask on with no one else in the car. I don't understand it.
Public health experts have done a great disservice to their profession and the public with the conflicting and changing recommendations they have made since we first found out about Covid-19. That is a big reason that politics seems to be dictating public health policy on masks rather than sound science. Of course, had President Trump pushed hard for mandatory use of masks in the beginning I have no doubts that the Democrats and the media would be on the other side of the issue. He would have been called an authoritarian tyrant if he had.
I can't help but also wonder about the conflicting messages that are being sent by the authorities in many states.
For example, how can any state that has a mandatory face mask requirement allow their restaurants and bars to be open? Is it not physically impossible to eat or drink with a mask on?
Consider this report last week from Michigan which is a mandatory face mask state.
If there is a mandatory mask requirement it seems that it has to follow that bars and restaurants must not be open in that same state or locality.
A recent analysis by JP Morgan seems to support the view that restaurants are a key vector in the transmission of the virus in states that have reopened. Restaurant spending was the strongest indicator across all credit card spending categories in being correlated with a rise in cases in a state. 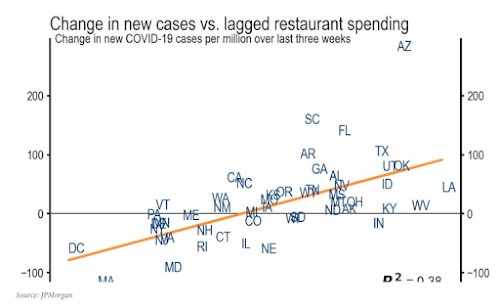 I am also starting to wonder if we will soon see an Anti-Mask League forming again in California after I saw this headline over the weekend. It seems that customers don't like wearing a mask when they are in a restaurant to eat. I wonder why?
We don't need politics defining everything that affects our lives.
Mandating face masks would not be necessary if people were really convinced that their health, public safety and the economy would all benefit from their use.
I can only hope that the public health experts can do a better job of quantifying the science and, more importantly, being more effective in their messaging to the public.
The fact that this is not the case tells you all you need to know.
It was true in 1919. It is still true in 2020.
Posted by BeeLine at 4:58 PM