Black Lives Matter started as a movement in 2013 after the acquittal of George Zimmerman who was charged with the shooting death of Trayvon Martin. It began as a social media hashtag activism movement but has since used a variety of tactics to gain awareness of its message, goals and objectives including the use of protests and rallies.
The movement became nationally recognized following the deaths in 2014 of two African Americans--Michael Brown in Ferguson, MO and Eric Garner in New York City---at the hands of police officers.
Of course, it should be remembered that the Black Lives Matter movement began when Barack Obama was President of the United States. During the entire eight years of the Obama presidency an African American was also the Attorney General of the United States (Eric Holder 2009-2015; Loretta Lynch 2015-2017).
Since its inception as a movement to protest police brutality Black Lives Matter has broadened its message and also its policy agenda.
It has moved beyond police reform although its signature issue still is to "defund the police."
I think it is interesting to look at the Google activity trends data for the search terms 'black lives matter".

When was the last spike? Almost exactly four years ago right before another Presidential election.
Is that a mere coincidence or is someone trying to stoke racial divisions for some reason?
Susan Rice, the former National Security Adviser to President Obama, recently stated that she would not be surprised if the Russians were instigating or funding some of the violent protests.

Former Obama administration national security adviser Susan Rice bizarrely suggested in a televised interview Sunday that the Russians could be behind the violent nationwide demonstrations following the in-custody death of George Floyd, although she offered no evidence for the incendiary claim.

Why stop with the Russians? Who else might benefit by creating divisions and discord among the American people?
I will leave that to your imagination.
One thing is for sure and that is that the unprecedented protests and media attention in the wake of the horrific killing of George Floyd has given Black Lives Matter the opportunity to raise its visibility and a platform to advance its objectives with the American people.
This becomes clear when looking at recent polling data that shows a massive shift in those who say they have a favorable opinion of Black Lives Matter.
Rasmussen recently found that 62% of likely voters had a favorable view of BLM and 32% had an unfavorable view.
Four years ago Rasmussen found only 32% had a favorable view of BLM and a majority saw the movement unfavorably.
The polling group Civiqs recently found 53% approving of the movement and 25% disapproving for a net positive score of 28%.
This chart tracks the change in views regarding Black Lives Matter in Civiqs polling over the last three years.
It is quite remarkable. It is also a lesson in the power of media. 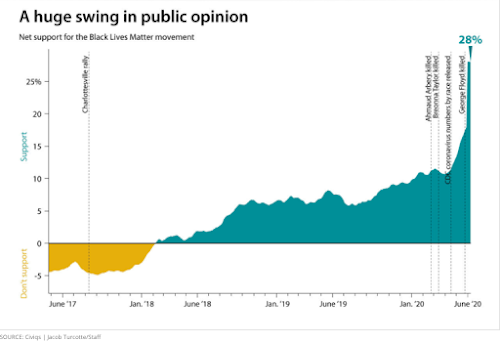 We live in soundbite world and a 280 character social media universe.
Black Lives Matter is at the top of the headlines in opposing racism and police brutality.
Who is not going to approve of that?
It is easy to understand that a group standing up against these evils is going to be looked at favorably.
However, what do we see when we look past the headlines and consider what Black Lives Matter is all about when we go beyond 280 characters?
What about the key BLM demand to defund the police?
A recent ABC News/Ipsos poll found that 64% of Americans oppose calls to defund police agencies.
A YouGov poll found just 16% of those polled supported less funding for police.
What about the BLM demand for reparations for all Blacks affected by slavery?
Only 29% of Americans say the government should pay cash reparations, according to an Associated Press poll from late last year.
It is also never mentioned that only 4% of the entire slave trade from Africa was brought to what is now the United States--400,000 out of 12.5 million in total. Most went to the West Indies and Brazil. 2% went to Europe which you never hear anything about.
This is the picture of an exhibit I took at the Natchez, MS visitor's center that shows the workings of the slave trade. 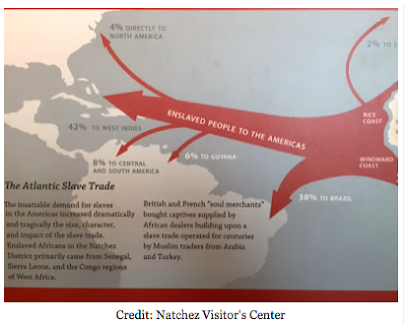 Let is also not be forgotten that almost 400,000 Union soldiers died in the Civil War in order to end slavery. When it comes to fairness are not the descendants of those soldiers owed reparations?
What about their goal to "disrupt the Western-prescribed nuclear family requirement"?
How popular is that going to be with suburban Moms once they realize that Black Lives Matter believes in disrupting the traditional family structure rather than supporting it?
What about the fact that Black Lives Matter seems to only focus on a small percentage of black lives?
That focus is on police killings of blacks. It is an important issue. It is indisputable that Black Lives Matter has already had a positive effect in bringing more attention to the issue. The proof is in the numbers.
As I pointed out in an earlier post, deaths of unarmed Blacks have dropped by almost 2/3 since the Black Lives Movement began in 2013. 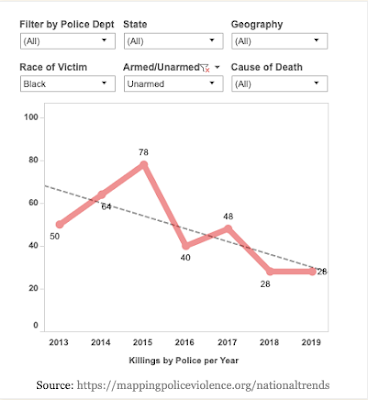 However, why is the BLM conversation limited to a small subset of lives in the black community involving Blacks killed by the police?
Why is there not equal focus given to the high levels of violence within the black community, particularly among young African American males? 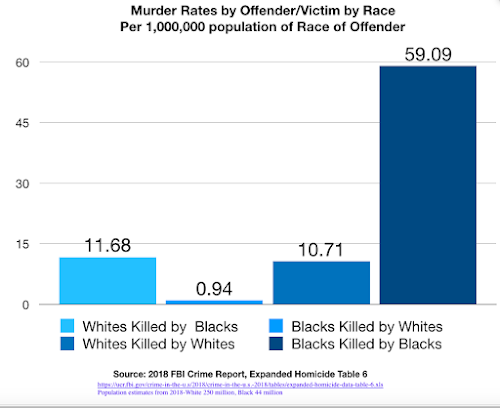 We can only hope that the attention the Black Lives Matter movement has received, and the favorable reviews it has now, will be used in positive ways to bring us closer together rather than pulling us further apart in this country.
In that regard the leadership of BLM would be wise to understand that 280 characters, sound bites and protests have to give way to policy proposals that will really make America better.
I have to think think they have a long way to go if they believe that defunding the police, tearing  American families apart and reparations are going to make things better.
I suggest that they also might want to keep a closer eye on those who want to make a personal statement using the Black Lives Matter platform.
For example, consider this report out of Olympia, Washington where the Mayor of that city saw her house vandalized in the name of Black Lives Matter.
Mayor Carol Selby is a liberal Democrat who had previously voiced support for the BLM movement.
However, having a BLM sign in her front window and a gay pride flag hanging on her porch did not prevent her house from being spray painted with "BLM", "Racist" and "Abolish".
A security camera on her porch captured the act. 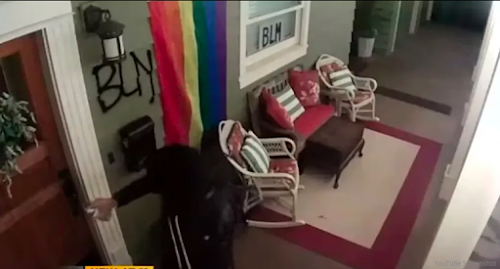 Mayor Selby had this to say after the attack.

"I'm really trying to process this," she told the Olympian Saturday. "It's like domestic terrorism. It's unfair."

Interestingly, the attack appeared to be carried out by a white woman. As I said, BLM would do well to guard their new found "brand equity" very zealously.
Getting 50%+ approval ratings in any political sphere in the United States is a significant feat today.
However, what can go up can also go down.
I believe that the vast majority of Americans want a fair deal for everyone.
The current polls regarding BLM reflects that.
However, fairness is never achieved by harming someone else in the process. How is justice achieved by trampling on the rights of someone else?
What happened to George Floyd was unfair, unjust and unwarranted.
How is it going to get better by doing unfair and unjust things to Mayor Selby, good cops and the owners of all the private property that has been destroyed in the last few weeks?
The Black Lives Matter website says this in the section on "What We Believe".
We embody and practice justice, liberation, and peace in our engagements with one another.
Who can argue with that? That ought to get a 99.9% approval.
Let it be for all to see with everyone.
Posted by BeeLine at 5:42 AM