From time to time I speak to groups of young people about the importance of financial planning and investing for their futures.

I spend a good deal of time on the power of compound returns in these talks and I include historical background data so that they can fully understand that power.

My point to the young is that time is their greatest asset.  However, in order to take advantage of that time advantage they need to be focused on their future.  They need to believe that the future will be bright and present many new opportunities.

I explained to them that they could not be further offbase. History has shown that innovation accelerates over time.  The first innovation in a new area is very hard.  For example, look at how long it took for man to figure out to fly.  However, once the Wright Brothers made the essential breakthrough on powered flight, things evolved very quickly.  For example, could Orville and Wilbur have imagined jet flight within a mere 50 years and a man on the moon within 70 years of their invention?

I have absolutely no doubt that human beings that are free to imagine and innovate will continually astound and amaze us.  However, that will only happen if people have the freedom to achieve.  How much innovation is occurring in Venezuela right now?  Or in North Korea?

Thus, the only doubts that the young in this country should have about the future is the extent that government might interfere with the freedom we have traditionally enjoyed in the private sector and the share of the nation's future wealth the public sector may require to meet its future spending requirements.

It is with this perspective that I wrote the blog post, "Will History Be Kind To Millennials" a little over a year ago.  With my experiences in speaking to young people recently I thought I would let you read it again.  The reality is that the policies of the Obama administration are in direct conflict with the self-interest of the Millennial generation.  However, in two consecutive elections this generational cohort voted against their self-interest. This voting behavior is unprecedented as groups never vote against their self-interest.  It looks like Millennial Madness to me.

Since Obamacare was implemented the madness should be even more apparent to Millennials. The reality is that they have done this to themselves.  Obama would not be in office without them.  Will they ever figure it out?  The clock is ticking.  Time will not be on their side much longer.

Will History Be Kind To Millennials? (originally posted 1/31/13)

When the history of the Obama era is written, I think one of the ironies that historians will focus on will be the level of support that younger voters provided for Obama that will clearly be seen as having been against their self-interest when viewed in the fullness of time.

Voters do not typically vote against their self-interests.  That is why the unions and government workers who believe in big government and big spending typically vote for Democrats.  It is also the reason that small business owners and investors who are concerned about high taxes and government regulations vote for Republicans.  It is why young voters in the Vietnam era voted for Eugene McCarthy and George McGovern and why generations of African-Americans voted for Republicans after the Civil War.

Obama carried two-thirds of voters aged 18-29 in 2008.  He carried this demographic with about 60 percent of the vote in 2012.  When you consider the following it is hard to understand why.

We know the obvious.  Over $4 trillion in national debt has been added in the Obama years.  The President's budgets over the next four years looks to be more of the same.  When Obama leaves office it looks as if these young voters will be inheriting at least $20 trillion in federal debt that they will have to pay for from future taxes.

The overall unemployment rate for 18-29 year olds in December, 2012 was 11.5%.  This is far worse than the 7.8% national rate.  The African-American unemployment rate was 22.1%.  12.2% of young Hispanics were unemployed.  These are all worse than four years ago when President Obama took office.

One of the more troubling graphs I have seen in a long time is this beauty that I found on dshort.com.  This chart shows the growth in federal loans to students from 1995 to 3Q, 2012.  Since President Obama has taken office these loans have increased by over 4-fold in four short years.

What I found even more incredible is that student loans are now the largest financial asset on the federal government's balance sheet as this chart from the Federal Reserve's "Flow of Funds" balance sheet shows.

Of course, the federal government does not have much in financial assets--only about $1.4 trillion--compared to its massive $16 trillion in direct balance sheet liabilities as measured by the current debt limit ceiling.

How good are these "assets" that the federal government is holding?  Take a look at these charts via Zero Hedge that show the percentage of 90+Day Delinquent Loans and the New Delinquent Student Loans from 2003 to 3Q2012.  Delinquencies are climbing even faster than the number of loans. 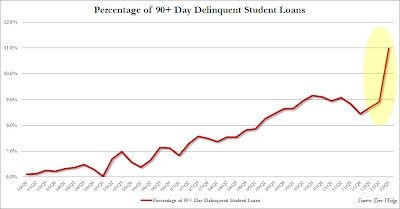 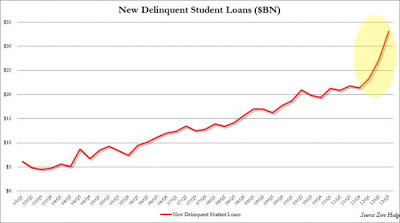 This is understandable considering the unemployment rate for younger people as well as the fact that so many college graduates (with large student loans) are underemployed.  In fact, a recent study by the Center for College Affordability and Productivity, says that out of 41.7 million working college graduates, 48% of them-more than 20 million people, held jobs in 2010 that required less than a bachelor's degree.  37% of the college graduates were actually performing jobs that required no more than a high school diploma!

What kind of jobs are we talking about?

5% of janitors have college degrees as do 18% of firemen.

You begin to see how those student loans can be difficult to repay with large numbers of young people unemployed and underemployed.

At the same time, President Obama seems to think that the answer to every economic problem we have centers solely around education.  Don't get me wrong, education is critically important.  However, education is an investment.  For that investment to produce a return it has to result in a good paying job.  An underperforming economy will quickly overwhelm a good education.  The last few years have proven that.

President Obama has always seemed to be challenged by economics.  He has spent a lot of time talking about increasing the supply of college students and providing more and more student loans.  However, he has done little in improving our economy and the supply of jobs.  The result is an over supply of college graduates when there is little demand for many of their skills.  This overbalance depresses wages for those that get jobs but it also means that college graduates ultimately take jobs from less-educated workers who then end up on the unemployment line. It is an ugly cycle of underemployment and unemployment.

I don't envy the future of our young people.  They are on the hook for $16 trillion and counting in federal debt.  They are the hook for many more trillions in public sector pension costs for state and local  workers.  They are on the hook for over $1 trillion in student loans that are not dischargeable in bankruptcy.  More than 1 in 10 of them is unemployed and 1 in 2 is underemployed.  The poor economy and low interest rates are keeping millions of Baby Boomers in the workforce and blocking their career advancement.  They almost certainly will pay much more into Social Security and Medicare than they will ever get out of it or they will end up caring for Mom and Dad somewhere down the line.

However, almost 2 out of every 3 of them has no one to blame but themselves.  They had a choice to make for their future but were more enthralled with "cool" than with "competent".

It is something I don't understand.  It is something that I don't think history will understand.  For the sake of their own future, I hope the so-called Millennial Generation will soon understand what is happening to them and demand real change.  It is their only real hope to create their own history. If not, they will just pay for ours.