Railing On About Keystone XL

I don't believe that I can think of any public policy decision in my lifetime that should be easier to make than approval of the Keystone XL pipeline project.

And yet it has been debated, deferred, delayed and deliberated on by the Obama administration for more than five years.

Let's review a list of just a few of the advantages of building the pipeline.

The environment?  How could that be? I am sure you have heard that is why President Obama has held up the pipeline.

However, the oil that would flow through that pipeline is already being shipped into the United States from the oil rich sands of Western Canada and to other regions of the country from the Bakken formation in North Dakota. It just is being transported in rail cars rather than through a pipeline.

Consider the growth in oil being transported in the United States by rail carloads over the last few years. 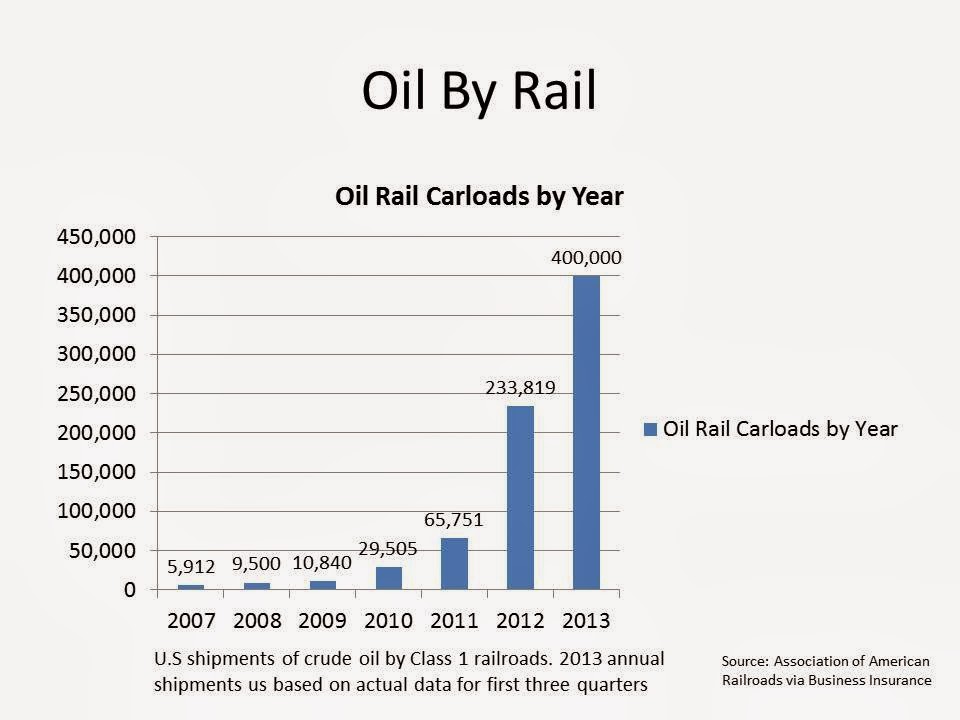 What is troubling about this from an environmental perspective is that only 15% of the 92,000 DOT-111 tank cars in use meet current federal safety standards according to Business Insurance magazine.

The chances of an oil spill occurring through a train derailment also are much higher than having a similar incident with a pipeline.  The Manhattan Institute analyzed years of data and found that incidents involving trains occurred about three times as often as pipeline per billion ton miles shipped per year.

The Manhattan Institute study also found that there are fewer fatalities and injuries for operators and the general public when transporting oil and other hazardous materials via pipeline as compared to rail.  Therefore, it is difficult to see the environmental concerns with the pipeline.

The reality is that President Obama's indecision on the Keystone XL Pipeline is really a decision for increased oil shipments by rail as well as a decision to ignore North American sources of energy to the detriment of the American economy.  The oil will flow--one way or the other.  It will move by truck or rail if it does not flow by pipleine.  It will also power the economies of  China, Japan or Europe if it is diverted away from the United States.  To believe otherwise is putting one's head firmly in the tar sands of Western Canada.

I am continually amazed at how short-sighted and narrow minded the minds of liberals are.

This seems to be another example of what I wrote about in Seen and Unseen.

Liberals don't like oil and coal because they think they are dirty and they defile the environment. However, they also like their hair dryers, iPads and electric cars and they all need energy to make them work.  Solar and wind farms can't do the job.  And they are ugly as well if they are in your backyard.

Liberals also generally confine themselves solely to visible effects when they consider issues.  They seem to consider only first-level effects and ignore everything else that might flow from that.   They live in a simple, superficial, single dimension universe. All of their focus is on what they see right in front of them. They ignore the unseen issues.

Therefore, they oppose a pipeline for environmental reasons even though the environment will be at far greater risk when oil is being transported by rail than it would be from the pipeline they oppose.  They also totally ignore all the other positive benefits to their country, the economy and their fellow citizens from that pipeline.

I could rail on but I won't.  There is enough railing going on.  When will President Obama realize it? At some point he needs to start Putin putting the best interests of the United States of America first and forget appeasing the liberal loons who oppose Keystone XL.  How long do we have to wait? Will Putin force him to finally do it?
Posted by BeeLine at 11:04 PM