The issue of illegal immigration continues to divide Washington, DC. We saw it again last week when Congress could not agree on a bill that would fund Homeland Security and also prevent funding President Obama's "executive action' to legalize 4 million illegal immigrants.

We will see more headlines this week as Congress kicked the issue down the road for another seven days.

The argument we have heard most often for immigration reform in the past is that the United States does not have enough workers.

In fact, when President Obama announced his "executive action" in December he said the following.

"Part of staying competitive in a global economy is making sure that we have an immigration system that doesn’t send away top talent, but attracts it.”


President Obama has supplemented this argument with a "humanitarian" view in his latest action in that generally those illegals that would be allowed to gain "legal" status through his use of his "executive authority" are the parents of U.S. citizens. In other words, if you came to this country illegally and had children that were born here, that then becomes your ticket to stay in this country. President Obama would call it keeping families together.

It would seem logical to me that if this is the case why wouldn't a minimum requirement also be that the parents should produce evidence that they also fully paid for the hospital costs involved with the birth?  If they did not pay or the costs were paid by Medicaid, why would we not require the newly legalized workers to be required to pay these costs back as a condition of their work permit status?

Under Obama's "executive action", if an illegal immigrant has to produce a birth certificate to prove they are the parent of a U.S. citizen, shouldn't they also have to produce evidence the birth was not paid by U.S. taxpayers or was a bad debt of the hospital?

And shouldn't they be obligated to pay this money back since the birth is, in effect, their ticket to access the U.S. jobs market? The amount owed could be withheld from their future wages on an installment basis. The money could also be allocated specifically to fund Obamacare costs. This would be the logical way to handle this issue if President Obama's "executive action" is allowed to stand. Or does that make too much common sense?

Let's also examine the argument that we need the workers.

Hotels, restaurants, construction and a number of service industries argue that there are not enough Americans willing to work at lower paid jobs. They argue we need to provide opportunity to low-skilled foreign-born workers to enter the United States to do these jobs that will result in an overall benefit to the economy

On the other end of the education spectrum, high tech computer companies in Silicon Valley and other industries that covet STEM college graduates (Science, Technology, Engineering and Math) are big supporters of opening the borders for these graduates arguing we are developing enough native-born citizens with these skills.

What are the facts?

I thought this chart from The Washington Post that shows unemployment rates by college major was particularly interesting on that score. 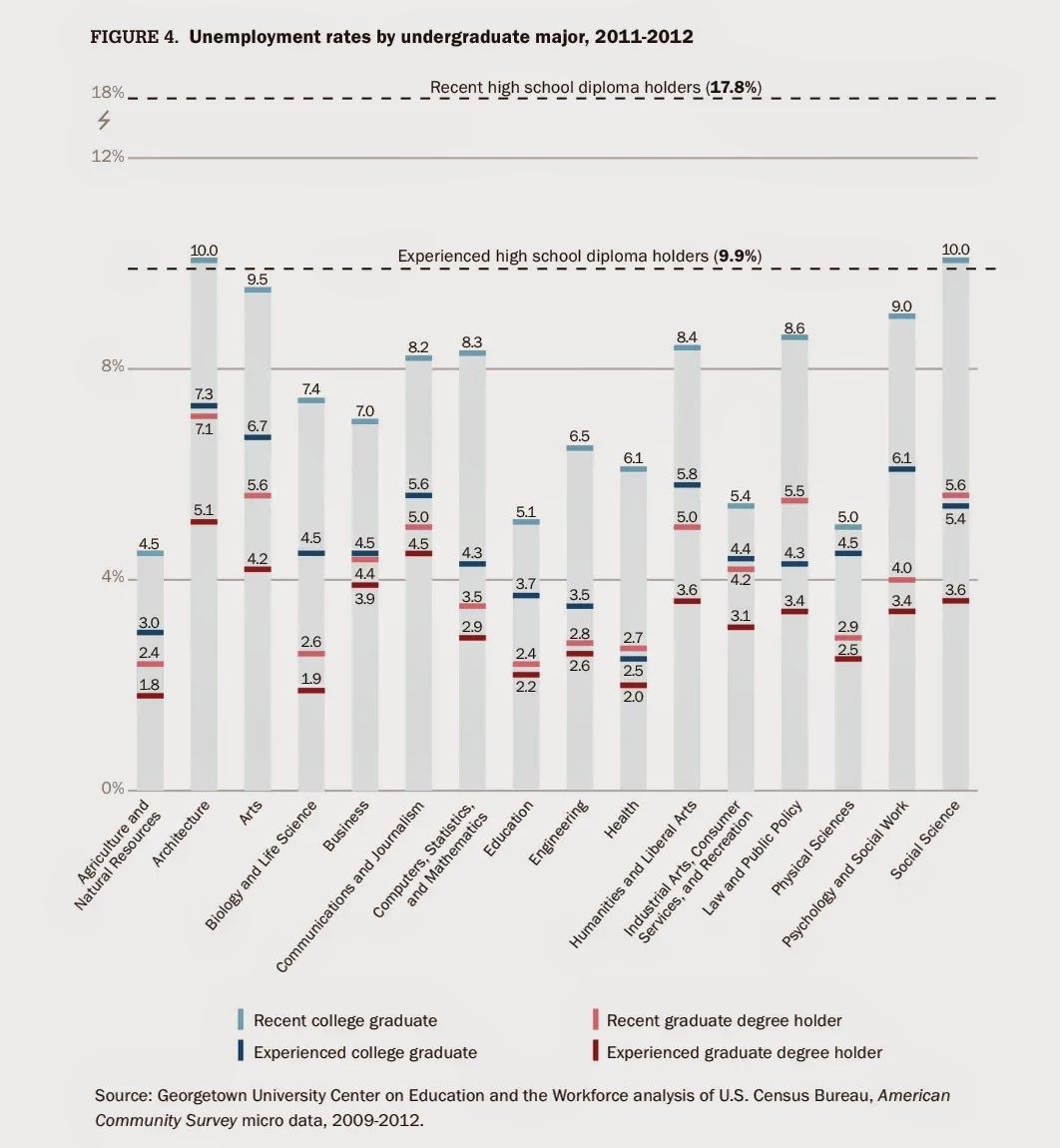 Notice also that the unemployment rate for recent college graduates is higher for Computers, Statistics and Mathematics majors (8.3%) than for Communications and Journalism majors (8.2%). If we can't employ nearly 1 out of 10 recent college graduates in Computers, Statistics and Mathematics, why do we think there is a need to bring thousands of additional foreign workers here. Why don't we get these young Americans employed first before bringing in additional immigrants?

The truth is that many of our political leaders and business interests keep calling for "immigration reform" when they really just want to increase the numbers of "legal" immigrants despite the fact that our economy can't provide enough good paying jobs to native born citizens as it is.

We are already providing legal "Green Card" status to over 1 million immigrants per year. No other country in the world provides more legal immigration each year than the United States already does.

The reality is that immigration reform is not so much an economic issue as it is a political issue. Democrats need the votes. That is all they seem to care about.

Corporate interests want to keep wage costs down. The labor unions should be anti-immigration but are more concerned with the success of the Democrat party than their own members.

Republicans in Congress are caught between the monied interests who want the cheap labor supply and their rank and file voters who fervently oppose illegal immigration. It is all about political interests and has very little to do with the best interests of this country, the American people, or especially, the American worker.

For the average American worker, the higher the immigration levels are, the lower their wages will be. That is basic economics. It is simple supply and demand.

That is why I would like to see the Republicans turn the tables on President Obama and the Democrats and combine an increase in the federal minimum wage with defunding of Obama's "executive action".

Pass the Homeland Security funding bill as a clean bill. Immediately thereafter, have the House of Representatives pass a bill increasing the federal minimum wage from $7.25 to $7.50 and defund Obama's executive action on immigration in the same bill and send it to the Senate

Failure to pass this bill requires Democrats in Congress and the President (if it passes and he vetoes it) to admit that 4 million illegal immigrants take priority over American workers.  And it also puts Democrats on the spot in that they have consistently been calling for an increase in the minimum wage for years. They suddenly don't want it if it means we can't legalize more illegal immigrants. That is a tough position to defend in anyone's home district or state.

Bear in mind that 29 states already have minimum wage laws in place that are in excess of the federal law. That should lay to rest fears that the GOP would be selling out on a major adverse economic issue.

Such a move could also be used by the Republicans to show that they are "working for the American worker" and are also "willing to compromise" on issues.

Sure, the Democrats would argue that GOP is just playing politics. However, I would much rather be on the Republican side of that political issue than be accused of trying to shut down the government or holding Homeland Security hostage to get the illegal action of the President de-funded.

(Note: It goes without saying that the strategy I propose would have those on the Hill arguing it could not be done because it would violate some aspect of the Budget and Appropriations process. In other words, it would be illegal. However, when did that stop President Obama?  My advice to Speaker Boehner and Majority Leader McConnell? It is time to start playing the game the way the other side plays the game.