The Republican Presidential primary field seems to get bigger every day.

And we can expect more entrants before it is over.

Last week I provided my initial views on the race and provided my perspectives on the candidates.

I believe the large field is a positive as it provides the opportunity to find the best candidate from a broad and diverse talent pool.

However, there are two practical problems with a big field that are also somewhat interrelated.

Human brains tend to perform poorly when faced with too many options. In fact, faced with too many choices we often make no decision at all. Or revert to a default mode. Confusion often means that we are most likely to just stay with the status quo. Therefore, good choices may never get a fair evaluation in the confusion caused by too much choice.

Barack Obama most likely would never have been elected if he had been one of six challengers to Hillary Clinton in 2008. He owes a good bit of his success to the fact that it was really just Hillary and him after New Hampshire. The rest of the field melted away early (Biden, Edwards, etc). A crowded field would have been to Hillary's advantage.

At the same time, John McCain won the GOP Presidential nomination in 2008 by being the default pick. Romney, Huckabee, Giulani, Ron Paul and Fred Thompson made the selection much more difficult (and risky). McCain was the safest pick in that he had been around the longest and he was the most familiar to voters. When questions arose and each candidate faltered in some way, McCain was the beneficiary.

The other practical problem involves the Primary Debates.

Most voters learn the most about the candidates from the televised debates. It is the one chance most have to judge the character and competence of the candidate but also in how they connect with the voters.

I follow politics closer than 99.9% of Americans but my exposure to most of the candidates running is limited to brief sound bites and slick tv ads. For example, I have seen Scott Walker, Jeb Bush and Ben Carson do a few tv interviews but nothing of substance. I have only seen Carly Fiorina in a couple of YouTube clips. I have had more exposure to Rubio, Christie and Cruz but it still is lacking in my assessment of each as a Presidential candidate.

I have the best feel for Huckabee (2008) and Santorum (2012) because I saw them in a lot of debates in the past two election cycles. Of course, you would have to live on the moon to not have seen Donald Trump a lot but I have no idea how he would stand up in the give and take of political debate.

That is why I think the debates are critically important in the selection process.

However, how do you have a debate with 15 candidates? Or even 12? It is impossible to do and have it be worthwhile for the voters.

You also have the additional problem of the confusion of choice with such a large field.

Understanding the problem, the Republican National Committee is rumored (with the tv networks) to be trying to limit the number of debaters in some way to between 9-12. They have already announced that they are limiting the number of debates to 9-12 compared to the 20 that were held in the 2012 primary season.

I agree that having that many candidates on stage at one time is not workable but there has to be a better way.

I think the better way is to break the field down into separate debates and also make it a competitive enterprise.

Instead of one debate the week of August 6 (the night of the first scheduled debate) have two (or three) with no more than six candidates.

You can then pair the top candidates (by current polls) in one debate and the second (or third tier) in another debate.

You poll after the debate and the 3 or 4 remaining leaders in the polls stay in the top tier and the top two winners of the second (or third tier) polls move up and the lower end of the top tier moves down.

In effect, it would be like calling up someone from the minors to "The Show" to challenge for the starting lineup. Or going from AA ball to AAA ball in the case of moving from the 3rd tier to 2nd tier.

You continue doing this with each scheduled debate until you had a manageable debate field and could manage only one.

My understanding is that the sponsoring networks for the debates hold a lot of power on the rules of participation but the Republican National Party needs to be actively working to push for the format that will best showcase its candidates (and its brand).

New York magazine devotes an entire article to the problem and suggests other creative solutions.

How about the 2016 GOP Primary Bracket?  Each candidate is seeded and debates one-on-one with another candidate with the winner proceeding much like March Madness. 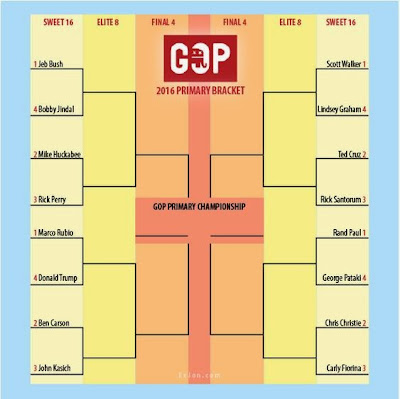 The Republicans have a unique opportunity to educate, inform and entertain the electorate in the coming election cycle. What better way to do it than with a little competition and gamification in the debate process.

However, it looks to me like it could be an opportunity to have the debates really be a difference with distinction for voters by,

in order to identify the best Republican candidate.