The Race Is On

The increasing number of GOP candidates formally announcing their Presidential campaigns has resulted in a lot of people asking my views of the race.

First, I don't have a personal favorite at this time. There are a lot of candidates I could support. There is not one that I would reject in favor of Hillary Clinton or any other Democrat I can see running.

In fact, I believe that is going to be the first priority in most Republican voters minds when they vote in the primary. Can they beat Hillary (or another Democrat)?

I am hedging a little on Hillary because I am not altogether sure that she will be the Democrat candidate. She most likely will be the nominee but who knows what else lurks in her closet? In addition, there are still a number of influential Democrats who want someone else but are silent right now. Most of the people who rejected her for Barack Obama eight years ago are still around.

It is still almost eight months until the first primary votes are taken and well over a year until the conventions. A lot can happen in that amount of time.

Running for political office is very similar to positioning a product in the marketplace. The same principles that apply to marketing and branding apply to a Presidential candidate.

It is also important to craft a simple message or overriding theme when you are running for President. Presidential politics is especially difficult for voters to figure out. There are a lot of issues and few voters (especially the key swing voters) agree with any one candidate on every issue. This complexity and the cognitive limitations human beings have in dealing with it forces people to construct simplified models of how the world (or the political scene) works in order to cope with it.

This is the notion of "bounded rationality" which the noted social scientist Herbert Simon documented in the 1960's and 1970's that is key to understanding how people make decisions. And they are not always based on rational thought.

I am going to use a little bit of "bounded rationality" myself in analyzing the Republican field and try to simplify it for you (and me) as well as consider it in marketing and branding terms.

First, the reality of Presidential primary politics is that the field narrows naturally over time as there is only so much money, organizational talent and voter support to go around.

The 2016 Republican primary calendar looks like this between February 2-March 15.

I believe that no more than three candidates will still be standing going into Super Tuesday. All the others will have been eliminated in the aftermath of the first three states.

My guess is that there will be three distinct types of brand categories at play in the primaries. Each candidate will be positioned within one of these groups as they try to attract the financial and voter support to gain the nomination.

To advance, each candidate in a brand group will need to beat the others in that group first. My guess right now is that the three survivors will come out of these distinct groups.

You could see two candidates both emerge from the Establishment group, for example, but if that occurs it would be my guess that one of the candidates repositions themselves to either the Evangelical or Non-Traditional brand.

This is how I see the three brand categories right now.


If I had to handicap the race right now, I would place Bush, Huckabee and Paul as the favorites in each category.

The big question mark right now is that there are so many candidates that are not battle-tested in Presidential politics. Only Huckabee and Santorum (and to a lesser extent, Perry) have the experience under their belt. A lot of candidates can look good on paper but how will they do under the glare of the debate stage and the scrutiny of the national press? This is particularly true of those who have not spent their careers in politics---Carson, Trump and Fiorina. That is why handicapping the race at this point is a fool's errand.

At this point I believe the best candidate on paper is Marco Rubio.  He has a number of advantages. He is young. He is articulate. He is Hispanic. He is from a very important swing state. He has a good looking family.

His major negative is his ill-considered attempt to broker an immigration reform bill that was in direct conflict with the views of the vast majority of GOP primary voters. However, in a testament to his political skills, he has done a good job of pivoting from that miscue and putting some distance between his views then and now. We will see how that plays once the race really gets going.

For now the race is mostly about money. And there seems to be a lot of money flowing in. Jeb Bush will bring in the most. I read one report that suggests he might have $100 million banked by the end of this month. However, will Jeb Bush be able to collect votes as easily as he is raising cash? In my view it will not be easy running with the Bush name. He starts the race with more money and also with more baggage that he only has by way of birth. It may not be fair but it's politics. It's never fair.

Rubio, Perry, Paul, Cruz and Trump may have the resources to get to Super Tuesday and beyond even if they can't gain traction in February. Substantial money in the bank when February begins could blow my three-pronged race theory out the window.

The other interesting thing that I see in looking at the state primary lineup is how nicely the early GOP primary states match up with the swing states Republicans have to win in the general election.

This article in Hot Air points to seven states that the GOP must win to prevail in 2016. Which states are we talking about?

Each of those states is in the early part of the primary season meaning that winning in those states should hold some greater relevance in selecting the best Republican nominee.

This map shows the electoral math based on the recent leanings of the 50 states. 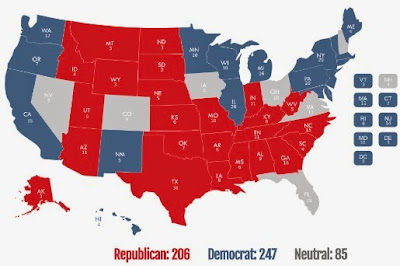 Note that Florida is absolutely critical in any path to the White House for the GOP.

So keep your eyes on both Bush and Rubio.

It is hard to see where at least one of The Sunshine Boys will not be on the ticket as the Presidential or VP nominee when you consider that math.