I became critical of Dr. Anthony Fauci about a month into the pandemic in a blog post titled "Two-Faced Fauci?".

In that post I summarized troubling examples of Fauci that belied his public persona as the objective, non-political medical-trained scientist giving us straightforward unvarnished truth.

I followed up with another blog post about Fauci in July titled "Does The Substance Match The Style" after Fauci agreed to a cover story in InStyle magazine that was nothing more than a puff piece extolling how great Fauci was.

He was "The Good Doctor". 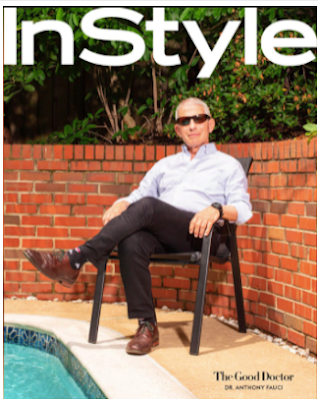 I had a very wise boss and mentor who advised me early in my career to always be on the look out for what he referred to as "the articulate incompetent".

These are the people who look good and sound great. They usually attended the best schools and know how to ingratiate themselves to the people who count. However, when you really considered what they  said or did, there was nothing there.

In the corporate world these people could quickly impress others and be persuasive in their presentations. However, there was no substance to back up the style. This fact eluded most people and articulate incompetents could inflict major damage on an organization because they had people doing the wrong things for the wrong reasons.

Anthony Fauci seems to me to be an articulate incompetent.

On the other hand, you have the inarticulate competent.

This is a person who may lack polish and who is not traveling in the right social circles in the organization. They may be rough around the edges and might say and do things that make others uncomfortable from time to time. They undoubtedly did not get an advanced degree from the "right" school. Their experience usually centers around common sense and real world experience. People tend to discount what they say due to how they say it and how they act. What they lack in style they make up in substance when all is said and done.

In the last few days we are finding a whole lot more about Dr. Fauci and what he was doing behind the scenes during the beginning stages of the pandemic thanks to a FOIA release of his emails that became public this week.

Interestingly, the emails seem to answer my questions about whether there were two faces of Fauci.

For example, this email chain apparently shows that Fauci seems to be gravely concerned about revelations that the virus may have been man-made and have come from a lab in Wuhan, China.

Fauci received this email that was sent at 10;32pm on January 31, 2020 from Scripps virus researcher Kristian Anderson telling Fauci that the virus "genome inconsistent with expectations from evolutionary theory" and "some of the features (potentially) look engineered".

This would clearly be troubling news for Fauci in that he had been involved in funding that went to the Wuhan lab.

It would be even more troubling if it was "gain of function" research that meant that virologists were doing work to create a lethal virus in the lab and it escaped or was purposely released by the Chinese when the money trail leads back to Fauci.

Note this email that same night (12:29am) that was sent to Hugh Auchincloss who was Fauci's second in command at the NIAID. Note that it references an attachment involving "gain of function".

Fauci was clearly burning the midnight oil that night.

This is apparently the pdf article that Fauci attached to the email which was co-authored by the head of the Wuhan lab doing the work on bat viruses (Dr. Zhengli-Li Shi) and UNC-Chapel Hill researcher Ralph Baric who was doing most of the gain of function research on these viruses in the United States until it was shut down in 2013 because it was deemed too dangerous. I first referenced the work of Baric in these pages on January 26, 2020. 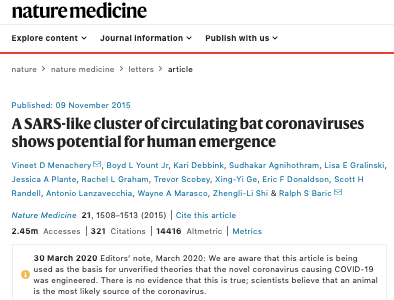 Note the disclaimer that was added to this abstract in March, 2020 that there was no evidence that Covid-19 was engineered.

Fauci repeated this narrative that there was no evidence the virus came from the Wuhan lab. A narrative that very possibly that he had a hand in creating.

Fauci stated repeatedly in April and May, 2020 there was "no evidence" that Covid came from the Wuhan lab. 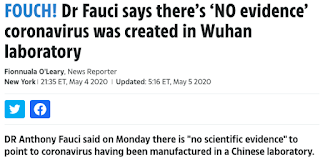 Fauci even contradicted the President of the United States when he was standing right beside him in April, 2020 after Donald Trump suggested that it might have come from the Chinese lab.

What about that email from Kristian Anderson to Fauci in January?

I would suggest anyone interested in the question of whether the virus mutated naturally from bats to humans, was bio-engineered, or escaped from that Wuhan lab somehow, should read this Vanity Fair article by Katherine Eban. It is LONG (11,000 words) but well worth the read.

The full truth is still not known.

However, the article seems to make clear that there was a concerted effort within the United States government bureaucracy to see to it that no one should even look for the truth.

Was Dr. Fauci involved in that effort? I don't know.

However, it is clear that he has been far from forthcoming on this subject as well as many others.

For example, here is Dr. Fauci corresponding with actress Morgan Fairchild (interesting he has time for this) on February 27, 2020 that there is nothing to be done right now to help the effort to fight the pandemic because the risk is low, there are few cases in the U.S. and the cases are well isolated.

I found this email particularly interesting because in April Fauci was on various media outlets claiming that he had advised President Trump to shutdown the country the third week of February. He claimed Trump did not listen to him or other top officials.
This is from an article on April 12, 2020 reporting on Fauci's appearance with CNN's Jake Tapper on its Sunday show, State of the Union.

Do you find it a little inconsistent that Fauci is telling Morgan Fairchild on February 27, 2020 that the risk is low, and since there are few cases, there is nothing that needs to be done right now. However, he later told us that at the same time he was supposedly pounding on Trump's desk to shutdown the country?
Two-faced? You decide.
One final interesting email is one that Fauci wrote to Sylvia Burwell on February 5, 2020. Burwell was Secretary of HHS under Obama and is currently President of American University in D.C.
It appears that Burwell had inquired of Fauci whether should should wear a mask for a trip she was about to embark on.
Notice Fauci's response.
"The typical mask you buy in the drug store is not really effective in keeping out the virus, which is small enough to pass through the material."

Fauci also received an email from a staffer on March 31 summarizing the latest science on the effectiveness of mask usage in combating a virus in a community setting.

He was told that nine very diverse RCT's (the gold standard in science research according to Fauci) led to one bottom line result.

No difference in ILI/URI or flu rates when masks are used.

Despite this, on April 3, 2020 (3 days after receiving the latest science on face masks) Fauci told the American people they should wear face masks to stifle the spread of Covid!

Of course, he later told everyone to wear two masks.

What is Fauci saying now about this?

He always likes to defend himself by saying that "the science changed."

It changed in 3 days?

Even today Fauci is saying that students in communities with lower rates of vaccination may have to wear masks in the Fall. 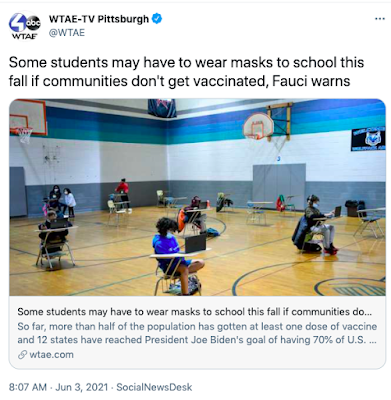 It remains to be seen what type of "science" he is relying on to say this?

From the beginning of the Covid-19 pandemic there have been a total of 309 deaths in the 0-17 age group.

During the same time period, there were 45,513 deaths for these ages for all causes.

There are approximately 80 million children in the USA under the age of 18.

Does Fauci even consider the risk/benefit equation in all of this?

Regarding the masks? Regarding vaccinating children?

Fauci even admitted recently that requiring students to get vaccinated to attend school was debatable.

Fauci has continually been lauded by the media for his leadership during Covid.

A year later, who had a better perspective on Covid?

You now can fully see the very real risks of following an "Articulate Incompetent".

I wrote this in that April 12, 2020 blog post about Fauci and my suspicions about his actions.

What this looks like to me is another life-long government bureaucrat trying to cover his rear end as the advice and the expert opinions he shared look increasingly suspect.

As this crisis passes and people look for those to cast blame, I believe that the public health bureaucrats should be first on the list.

One of the great tragedies of Donald Trump not serving another term is that I am positive that Tony Fauci would have been fired before Inauguration Day.

That is truly unfortunate.

However, the end of Fauci's power and influence looks to me to be nearing an end.

I thought that before the email release. I believe it more today.