The Road Not Taken

In January 2020, just as we were beginning to learn about the pandemic in China, I predicted that it would be difficult to ever get credible numbers on cases in that country.

I wrote this on January 30, 2020 questioning the reliability of what we were told about the number of cases reported in China.

No one knows if this data is reliable. How many cases are there that are not being reported? How much can the Chinese be relied on to be completely truthful on what is the real story?

The key statistic that I want to keep my eye on are the reported deaths from the virus. Those numbers will undoubtedly tell us a lot more about the effects this virus will have on mankind.

The death rate from the flu is around 1 in 800 cases. More importantly, most people have had the flu and recovered, so it does not produce the fear that an unknown virus can cause.

So far, the death rate from the coronavirus is running at around 1 in every 50 cases (2%). Of course, that assumes the denominator (the number of total cases) is as accurate as the count on the deaths (which I assume is more accurate). That is a lot scarier than a normal case of the flu.

It is a year and a half later and there are still a lot of questions about the reliability of the numbers.

It is still difficult to get a reliable number of the total cases we have had in the United States.

The CDC reports that the official confirmed case count is that 33.2 million Americans have been infected with the virus.

However, this count only includes those that were tested.

How many others had the virus and were never tested?

I know scores of people who have told me that they had something that resembled Covid (fever, cough congestion, tiredness, loss of taste and smell) but were never tested. A fair number of those were in late 2019 or early 2020 before we even knew Covid was here.

The CDC  estimates that only 1 in 4 Covid infections has been officially reported.

It puts the estimated number of total infections at 115 million (thru March 31).

That would be slightly more than 1/3 of the population of the United States.

That works out to an IFR (infection fatality rate) of about 0.5%.

That is 1/4 of what the early reports were coming out of China.

However, it is also 5x what we typically see in annual deaths from the flu. Covid is clearly much more deadly than the seasonal flu.

Shortly after the lockdowns were instituted in March, 2020, I stated that I was most interested in seeing what the excess overall deaths were from Covid.

I said this because it was clear from the beginning how much the death burden was skewed to the elderly.

The question in my mind was how many of these deaths would have resulted from other causes anyway and whether locking down the under 65 population made sense considering the enormous economic and social costs that would result.

It seems to me that the excess mortality number is the most important data point in all of this. It is especially important as the President and others have to look more critically this week at the trade-off between our public health and our economic health.

Perhaps total deaths is not a number that we have routinely collected or monitored on a daily basis across the United States. It probably is a number than gets reported from death certificates in the various states on a monthly basis to the CDC.

Even if we have the number on a daily basis it probably lags a couple days compared to deaths because of the lag in getting the death certificate signed and filed.

However, I am a numbers guy. I think President Trump is one as well.

If I was sitting in his chair I would be demanding to see the total death numbers across the United States every day and compare it to the numbers that were projected before all of this started in order to determine the excess mortality number from Covid-19 in real time.

We need better data than what I am seeing. I would also not want to get this number a year from now and find out we destroyed the economy by not having the right data when we needed it.

Is is over a year later and we now have those numbers.

Did we make the right call in locking down the economy and our schools?

The first thing that is interesting in looking at the data is that total deaths for children 0-4 was actually lower in 2020 than in 2019 even in the middle of a pandemic.

Is it due to the fact that Covid is less fatal to children than the flu that essentially disappeared in 2020?

Is it due to the fact that parents kept a closer eye on their children during the lockdown.?

Consider as well that this decline occurred even though children were not going to the doctor for well child visits and getting vaccines for other diseases for a good portion of the year.

That means that there were also 150,000 other excess deaths attributed to something else than Covid.

We also know that the Covid death total is probably overstated. How many listed as Covid deaths died with Covid rather than from Covid?

For example, Alameda County in California recently revised its Covid death totals down by 25% due to this reason. Counting a motorcycle accident death as a Covid death when the decedent tested positive post-mortem is not a Covid death nor should a pancreatic cancer death count in someone who was given one month to live before they tested positive for Covid.

If you reduced the national Covid death totals by a similar percentage to what Alameda County did, the 533,000 excess deaths during the year would split about 288,000 Covid and 245,000 non-Covid.

This also makes Covid with a IFR that is still higher than the flu but no where near what we were led to believe the mortality was from Covid in March, 2020.

Speaking of mortality, here is another interesting chart that shows the mortality statistics for the United Kingdom since the beginning of the pandemic.

One interesting stat in this chart is to look at the last two columns that show the probability of death by age group comparing all causes vs. with Covid.

Tell me how it is justified to approve a vaccine for emergency use for children considering these numbers.

This is an emergency for children of these ages?

What was the cause?

It is particularly interesting in that these non-Covid excess deaths are particularly prevalent in those in the age 15-44 age groups.

The most obvious answer is that non-Covid excess deaths in these age groups are lockdown related.

For example, Dartmouth College had three suicides among its freshman class this year.

Three! These students were the cream of the crop. Why?

What is the societal cost of the deaths of so many young people during 2020---not due to the virus but our public health response to the virus?

It is clear now that in addition to the economic cost of the lockdowns there was also a huge human cost in populations that were not very vulnerable to the virus.

There was another alternative.

Sweden chose a different public health response. It elected to protect the elderly and vulnerable populations as much as they could but to allow the rest of the population to carry on as normally as possible.

Where is Sweden on its excess deaths count?

Here is a graph showing excess deaths in Sweden since 2017 compared to baseline deaths.

Sweden's excess deaths increased by about 10% in April-May, 2020 and by about 5% in late 2020 and early 2021. However, in other periods over the last 18 months, Sweden has had lower than expected deaths.
Here is a closer look at deaths in Sweden comparing the 2017/18 flu season with 2020/21. For context, in the 2017/18 flu season Sweden only had excess mortality that year that was half of Europe.
Sweden has not had more deaths per million this flu season than it had in 2017/18.

Here is a comparison of excess deaths in Sweden versus the United States and United Kingdom. 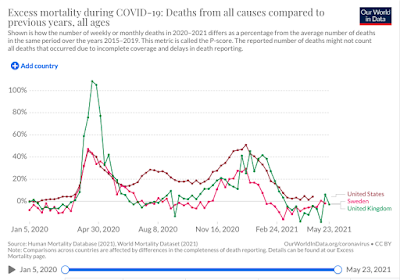 Dr. Anthony Fauci and others said that Sweden was making a colossal mistake in its approach to Covid.

What would one say today?

There was another road that could have been taken.

Who made the colossal mistake?

“The Road Not Taken"

And sorry I could not travel both

And be one traveler, long I stood

And looked down one as far as I could

To where it bent in the undergrowth;

Then took the other, as just as fair,

And having perhaps the better claim,

Because it was grassy and wanted wear;

Though as for that the passing there

Had worn them really about the same,

And both that morning equally lay

In leaves no step had trodden black.

Oh, I kept the first for another day!

Yet knowing how way leads on to way,

I doubted if I should ever come back.

I shall be telling this with a sigh

Two roads diverged in a wood, and I—

I took the one less traveled by,

And that has made all the difference.”