10 Observations About Hillary and Bill's 1040

I spent the early part of my career as a tax attorney and CPA and prepared and reviewed hundreds of individual income tax returns each year.

There is a lot that you can discern about a person's financial life by their tax return. It really is a window into the life they led during that year. What they received in income and where it came from. What types of investments they had. Their mortgage debt. Their charitable giving.

Hillary Clinton released her tax returns (and Bill's as they filed jointly) for the years 2007-2014 last Friday afternoon. Of course, it was on a Friday because that is when you release information in Washington when you don't want to get much attention from the mainstream media.

Remember in June, 2014 when Hillary was on her book tour and made this astounding remark when asked about her own financial standing as a member of the .001% on relating to the common people ?

"We pay ordinary income tax, unlike a lot of people who are truly well off, not to name names; and we've done it through dint of hard work,"


Of course, this is after she had earlier stated that Bill and she...

"came out of the White House not only dead broke but in debt,"  had "no money"  and "struggled to piece together the resources" for mortgages and her daughter Chelsea's college education.


Here are 10 observations that I thought were interesting when reviewing Hillary and Bill's 2014 return. I also glanced at a couple of other years as well but did not have the stamina to give them the same review as I did the 2014 return. 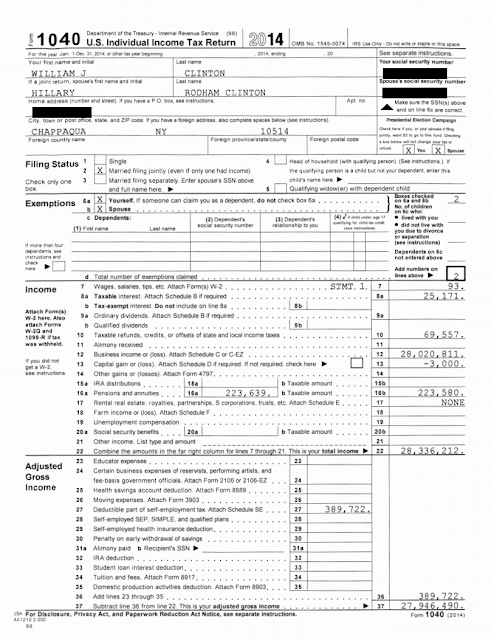 1. Bill and Hillary reported $28 million of Business Income for the year. Keep in mind that this is a net number after subtracting business expenses. Here are the gross income numbers for Hillary and the business activities in which she earned the money.


She deducted about $2.7 million as expenses against this income. She spent and deducted more than $1.1 million just for travel expenses!

2. Bill's Gross Business Income breaks down like this.
Bill incurred $1.6 million as expenses against his income and only $375,000 of his travel.  Bill, that is downright embarrassing for someone that used to use that much in fuel on Air Force One in a week.

It is interesting to note in Bill's expenses he took a $945 deduction for the business use of his home. This is a hot button issue with the IRS and you have to ask why would you even bother with this if you were Bill and Hillary Clinton? I understand the office use really relates to a portion of the barn on the Chappaqua property but taking this small deduction makes no sense to me.

4. Interest income of $25,171 was reported. All interest was from J.P. Morgan Chase Bank N.A. with the exception of $464 for interest on tax refunds.

Considering the low level of interest on bank deposits the Clintons must have a substantial amount on deposit with Chase. For example, the current interest rate on savings at Chase is .01%. To earn $25,000 there would have to be $25 million on deposit at Chase. The rate on a 10 year CD at Chase for over $250,000 is currently 1.05%. It would take about $2.4 million on deposit to generate $25,000 of interest income with CD's. Their cash balance at Chase is somewhere in between I would imagine.

5. Interestingly, for a couple who has about $28 million in adjusted gross income the Clintons have not reported any dividend income at all. Do they not own any stocks? Do they own equities but none pay dividends? Where is their money outside of Chase interest bearing accounts? You might argue that they are concerned with possible conflicts of interest but owning publicly traded stocks would seem to have fewer conflicts than the organizations to who paid them the enormous speaking fees they have taken. (See #10 below).

6. One possible answer is real estate. Bill and Hillary deducted $104,303 in real estate taxes for the year.

If you haven't seen it, you might want to check out this video produced by CampusReform.org where a number of Millennials were asked to guess which Presidential candidate had lived in various houses. To say the least, these young voters were shocked when they found that all of the houses pictured in the video were (or had been leased) by the Clintons.

7. The Clintons also did not report any current capital gains or losses for the year. They did deduct $3,000 (the maximum annual limit) from a $702,540 capital loss carryforward. during 2014. This loss carryforward seems to relate to a long-term capital loss of $726,761 that was taken in 2008 on the disposition of an investment in Yucaipa Partnerships. It appears it was a complete loss on the original investment.

Looking further into this it appears that the Clintons walked away from Yucaipa when Hillary was running for President in 2008 for fear that the relationship with founder Ronald Burkle could prove embarrassing for potential conflicts of interest with some of the investments in the partnership funds that the Clintons were involved with.

However, all in all it appears the Clintons did ok while they were in Yucaipa.

This is what Wikipedia says about Yucaipa and Bill Clinton.

These were the only contributions to any churches in the 2007-2014 period as reported in the Clinton tax returns. Did they just rediscover religion in 2014?

Interestingly, I could not find any indication in the IRS Exempt Organization data base that the Hot Springs High School Class of 1964 is a a qualified 501(c)(3) organization that would allow for tax deductibility. My guess is that this donation was for activities surrounding Bill Clinton's 50th high school reunion. These types of activities would normally not qualify for 501(c)(3) status unless the funds were going for an educational purpose such as a scholarship fund. Again, I find it strange that on a return with $28 million of AGI you are worried about a $200 deduction

9. Hillary deducted $3,816 as business expenses for "technical support". Is this related to IT support for the server for her own email system?  She also deducted the massive sum of $78 for "Security System Fees" in the return.

Yikes! Did she think this would be sufficient to keep the Chinese from hacking her email?

Her going rate for the year appears to have been $225,000. However, she was able to get more for some engagements. For example, the Jewish United Fund/Jewish Federation of Metropolitan Chicago was charged $400,000. Is that because they are wealthier? Beaumont Health System in Troy, MI paid her $305,000 (we all know health care  has plenty of money) and Golden Tree Asset Management in NYC paid her $275,000 ( I get that as well, they have golden trees).

Hillary had a couple of incredible weeks on the speaking circuit in 2013. If only we all could bring in this type of money over a week or so.

It is all quite amazing.

Less we forget, a number of former Presidents almost died penniless including Jefferson, Grant, William Henry Harrison and Garfield. Harry Truman was heading that way until Congress passed a law (in 1958) establishing the first Presidential pension.

How times have changed.

Do we really want to give the Clintons two Presidential pensions?