‘Everything that is really great and inspiring is created by the individual who can labor in freedom.’
-Albert Einstein


When Dick Fosbury was a sophomore in high school he could not clear 5 feet which was the minimum qualifying jump height for many high school meets.

Fosbury high jumped like everyone else did in his sophomore year using the so-called ''straddle method" where he approached the bar and thrust one leg up and over the bar and ended up with his body straddling over the bar as he attempted to get his trailing leg over as well.

By the end of his junior year in high school Fosbury jumped 6'3" to break the school record at his high school. A year later he was runner-up in the Oregon state track and field meet.

How did he improve so rapidly?  He ignored the conventional wisdom and found a better way to clear the bar. His new high jump method became known as the "Fosbury Flop."

This is how Fosbury describes it.

I take off on my right, or outside, foot rather than my left foot. Then I turn my back to the bar, arch my back over the bar and then kick my legs out to clear the bar.”


Five years after Fosbury started experimenting with his new method he won the Gold Medal at the 1968 Olympics in Mexico City.

By the next Olympics, 28 of the 40 competitors were using the Fosbury Flop. Today you don't find anyone doing anything else.

You can see the effect that the Fosbury Flop had on the world high jump record.

Fosbury's idea and his independence changed the world of high jumping.


Pete Gogolak was another individual thinker who came up with a better way to placekick a football.

Gogolak was the first college football kicker to kick the football soccer style rather than the straight ahead style that had been in use for decades. Rather than use the toe to kick the ball, Gogolak kicked the ball with the instep of his foot similar to the way he had learned to kick a soccer ball in his native Hungary. 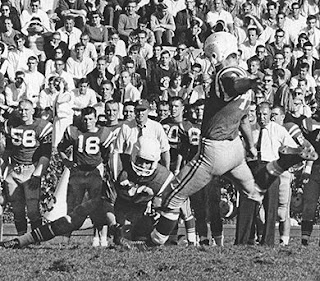 The rest is history. Gogolak (as well as his younger brother Charlie) went on to the NFL and changed the way the ball was kicked forever. There are no longer any kickers who toe the ball like Lou "The Toe" Groza did.

I thought of all of this today as I watched Bryson DeChambeau win the U.S.Amateur Golf Championship.

DeChambeau is another individual who has freely labored on his own to find something that works better for him. Bryson plays with irons that are all the same length (37.5"). His wedges are the same length as his 4 iron.

Whether uniform length irons will transform golf is yet to be determined but it certainly seems to be working for DeChambeau. Today he became only the 5th player in history to win both the NCAA Individual Championship (Bryson played for SMU) and the U.S.Amateur in the same year.

By the way, the other players that have accomplished that feat have gone on to pretty good careers playing golf.

Where would we be if everyone always just conformed to the conventional wisdom?  History shows that we would be way behind where we are today but for the few who see things differently, and most importantly, are not afraid to pursue their ideas despite the inevitable ridicule and reprimands that come with taking a different path.

I started with an Einstein quote and I will end with one as well.

'There are few enough people with sufficient independence to see the weaknesses and follies of their contemporaries and remain themselves untouched by them.'

Thankfully there are a few who are both independent enough and can remain untouched by those who tell them they have it wrong when they know they are right.

Thank you, Dick Fosbury, Pete Gogolak.......and Bryson DeChambeau...... for showing us the power of your ideas, your independence, your inner strength and the inspiration you provide to all of us that conventional is not always wisdom. At times it is nothing more than conventional conformism.