Can Donald Trump be elected President of the United States?

Can abortion be outlawed?

Can the 2nd Amendment be repealed?

All of this is possible in the United States of America where the people control the governmental process through their votes.

The people are sovereign in our system.  They possess the supreme or ultimate power to do anything they want.

This seems to be lost on too many people who complain that they have no influence or power. It may seem that way when you are just one vote. However, those votes add up quickly.

Our Constitution also insures that change can be made fairly rapidly.

The entire House of Representatives has to stand for a vote every two years. The President every four years and Senators every six years. If you think about it, within four years you can change the entire House, the President and two-thirds of the Senate. With those numbers you can do almost anything you want, including passing a Constitutional Amendment in Congress. You still would need three-fourths of the states to agree but they also do not have terms extending beyond four years.

I am currently reading the history of the Prohibition movement that resulted in the enactment of the 18th Amendment to the U.S. Constitution which took effect on January 17, 1920.

It prohibited the manufacture, sale, or transportation of intoxicating liquors or the importation or exportation into or from the United States for beverage purposes.

It is an amazing story to consider that alcoholic beverages could have been prohibited especially when considering how much these liquid libations were ingrained into the culture and how significant the alcohol, beer and saloon business was to the economy.

A few fun facts from "Last Call: The Rise and Fall of Prohibition" by Daniel Okrent that shows just how ingrained intoxicating beverages were in the United States in the years before Prohibition. 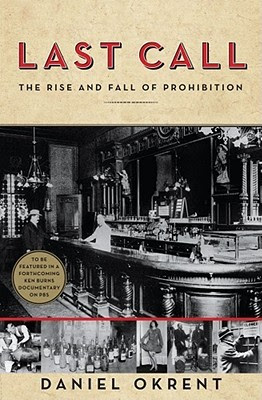 How did we get Prohibition?

It started with a handful of women in Hillsboro, Ohio in December, 1873 who started praying, reading the Bible and singing in front of local saloons. This ultimately led to the formation of the Women's Christian Temperance Union in 1874 by a woman named Frances Willard.

The WCTU worked tirelessly at the state legislature and local school board level to require compulsory temperance education laws in schools. By 1901, compulsory temperance education was on the books in every state in the union. It then only took less than one more generation to get to their ultimate goal. Another lesson on how important it is to capture the minds of the young!

The establishment of the Anti-Saloon League in the 1890's (in Oberlin, Ohio) was the final key element in pushing the country to Prohibition. The ASL was the first strong special interest group which had a singular purpose, was backed by over 30,000 churches across the country and was not afraid to use the voting power of its members to influence (and intimidate) the political class. (Do you think the political class wanted to give up the beer and liquor tax revenue?)

The Anti-Saloon League knew that by targeting the margins in every election, that with as little as 10% of the vote, they could control the outcome of many elections.  They took no prisoners. Politicians that did not vote their way soon were quaking in their boots.

For example, by 1903 in Ohio , the ASL had targeted 70 sitting legislators of both parties and defeated every one of them as well as the popular Governor of Ohio who had persuaded some legislators to weaken a piece of legislation that the ASL wanted.

You can only be sure of one thing with a politician---they love their job. And you can't do that job if you lose your seat. The people spoke and the politicians listened.

The rest, as they say, is history.

Prohibition lasted until December 5, 1933 when it was repealed with the adoption of the 21st Amendment.

There is no better example of the power of the people.

They took away alcohol and they brought it back. Such is the power of the people.

I don't want anyone to ever tell me that they can't do anything or something can't be done to change our government.

The people have the power.

They just need leadership and the will to use that power.

History teaches us that when we look at Prohibition.
Posted by BeeLine at 9:01 PM