Clinging To Their Guns

President Barack Obama is a gun control advocate but since he has been in office the number of new guns entering circulation in the United States annually has doubled---from about 7.5 million to almost 16 million per year.

This is one of several remarkable statistics contained in a recent article in The Economist. 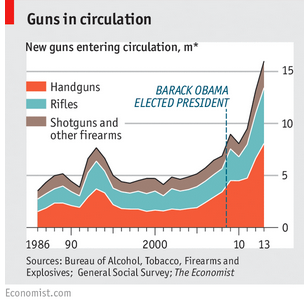 All of this has been very,very good for the stock prices of the two largest publicly owned gun manufacturers in the United States. 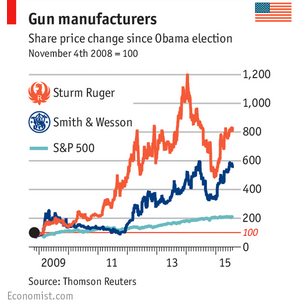 Has all of this led to more deaths by guns?

You might be surprised to learn that suicides each year account for almost twice as many deaths by firearms than homicides. 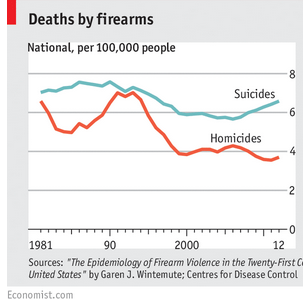 In exact numbers, according to the Brady Campaign to Prevent Gun Violence, there are 11,294 homicides by guns but 19,992 suicides.

Support for gun control is much weaker today than it was 50 years ago. According to The Economist, 60% of Americans wanted to ban handguns in 1959.  A recent Gallup poll found that support for a ban on handguns was only 26% today.

This view seems to be driven by those who believe that having a gun in the home makes a home safer. Only 35% of Americans held that belief in 2000. 63% hold that opinion today.


However, despite this view, only about 30% of households actually own a gun. That is down from 50% in the mid-1970's.  All of this leads to the conclusion that all of the new guns are primarily going into the hands of those that already own them rather than an increasing number of armed citizens.

I guess in looking at these statistics you could say that President Obama was right about one thing when he said during the 2008 campaign when referring to small town voters across the Midwest that "...they cling to guns or religion..."

Obama has certainly not been able to do anything about gun control but he has been responsible for a lot more clinging to their guns than we have seen in a long, long time.