The Science of Success

I speak from time to time to groups on "The Science of Success".

Most people who achieve success have followed a formula that leads them there.  It does not just happen, they make it happen.

I just finished reading the book, "West Point 1915-Eisenhower, Bradley and the Class the Stars Fell On" authored by Michael E. Haskew. 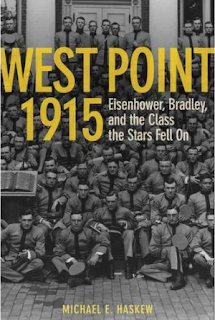 West Point graduated 164 young officers in June, 1915 which included future 5-star Generals Dwight Eisenhower and Omar Bradley. However, an additional 57 members of that class also earned their stars as Generals (36% of the class). No class, before or since, has seen so many climb the ladder of success in the Army.

In reading the book it was evident once again that the key elements that I speak about in the "Science of Success" were also present with the West Point Class of 1915.

What are some of those elements?

Passion--Those that entered West Point in the summer of 1911, and graduated four years later, had a passion (287 started but only 164 graduated--57%) for what they were doing and what they wanted to accomplish in life. For some, that passion derived from the fact that they likely would not have gone to college but for being accepted at West Point. Eisenhower and Bradley were both from modest families whose families could not afford to send them to college. West Point was a way out and a way up in their lives.

Preparation--No one gets to the top without preparation, practice and perspiration. When you see a successful person you don't see what went in to getting them there.  Eisenhower and Bradley toiled for years in a series of postings and assignments that they were not sure would ever lead them higher than the rank of colonel. Neither saw any combat experience in World War I which they thought would limit their future career advancement. Although Eisenhower did not get the assignments he wanted early in his career, he made a decision that, despite his disappointments, he would perform every duty given to him by the Army to the best of his ability.  He carried out his duties in a manner designed to make every boss sorry to see him leave. When his time came he was ready.

Perseverance--No one ever succeeds without facing challenges and adversity. The West Point experience is designed to discover those that will persevere and weed out those who will quit when the going gets tough. Eisenhower spent 16 years stuck at the rank of Major. He did not get promoted to the rank of Colonel until March, 1941---over 25 years after graduating from West Point. You also see it in looking at the bigger picture. At their 25th West Point reunion in 1940, 109 of the 164 graduates were still in the Army (23 had died and 32 had resigned or been discharged). Of those 109 who had persevered, 59 ( 50%) became Generals. A little more than a year later Providence had an important role for them to play in world history.

Providence---There is no mistaking the fact that Providence is an invisible hand guiding our lives. Omar Bradley was an alternate to the West Point in the Class of 1915. He only gained admittance (in August rather than June like the rest of his classmates) because the candidate ahead of him failed an entrance exam.

Eisenhower wanted to attend Annapolis. He was first on the list of candidates for that appointment and second for West Point. However, his Congressman nominated him for the West Point spot and gave the Annapolis slot to someone else. Eisenhower would never have led the D-Day invasion as a naval officer. He also never would have been President except for Providence.

Likewise, many members of the Class of 1915 at West Point would never have retired as Generals but for World War II changing the arc of their careers. We can be passionate. We can prepare. We can persevere. However, Providence has a hand in our life that can alter its course. What can you do about it? You exhibit passion, you patiently prepare and you persevere on the new path before you. It is called dealing with life.

On the subject of perseverance, I recently came across a great article by Dr. Travis Bradberry on the "10 Habits of Mentally Strong People".

Dr. Bradberry cites the research of University of Pennsylvania psychologist Angela Duckworth who conducted a study of West Point cadets to see if she could predict which of these young men and women would make it through West Point's introductory Beast Program. She found that those that survive are not the smartest, most talented or the most athletic. They have most mental strength---she calls it "The Grit Scale".

The Grit Scale measures mental strength, which is that unique combination of passion, tenacity and stamina that enables you to stick with your goals until they become a reality.

To increase your mental strength, you simply need to change your outlook. When hard times hit, people with mental strength suffer just as much as everyone else. The difference is that they understand life’s challenging moments offer valuable lessons. In the end, it’s these tough lessons that build the strength you need to succeed.

Developing mental strength is all about habitually doing the things no one else is willing to do.


These are the habits that mentally strong people rely on regularly according to Bradberry.

You have to fight when you already feel defeated. A reporter once asked Muhammad Ali how many sit-ups he does every day. He responded, “I don’t count my sit-ups, I only start counting when it starts hurting, when I feel pain, ‘cause that’s when it really matters.” The same applies to success in the workplace. You always have two choices when things begin to get tough: you can either overcome an obstacle and grow in the process or let it beat you. Humans are creatures of habit. If you quit when things get tough, it gets that much easier to quit the next time. On the other hand, if you force yourself to push through a challenge, the strength begins to grow in you.

You have to delay gratification. There was a famous Stanford experiment in which an administrator left a child in a room with a marshmallow for 15 minutes. Before leaving, the experimenter told the child that she was welcome to eat it, but if she waited and didn’t eat it until he returned, she would get a second marshmallow. The children who were able to wait until the experimenter returned experienced better outcomes in life, including higher SAT scores, greater career success and even lower body mass indexes. The point is that delay of gratification and patience are essential to success. People with mental strength know results only materialize when they put in the time and forego instant gratification.

You have to make mistakes, look like an idiot, and try again—without even flinching. In a recent study at the College of William and Mary, researchers interviewed more than 800 entrepreneurs and found that the most successful among them tend to have two critical things in common: they’re terrible at imagining failure and they tend not to care what other people think of them. In other words, the most successful entrepreneurs put no time or energy into stressing about their failures; they see failure as a small and necessary step in the process of reaching their goals.

You have to keep your emotions in check. Negative emotions challenge your mental strength every step of the way. While it’s impossible not to feel your emotions, it’s completely under your power to manage them effectively and to keep yourself in control of them. When you let your emotions overtake your ability to think clearly, it’s easy to lose your resolve. A bad mood can make you lash out or stray from your chosen direction just as easily as a good mood can make you overconfident and impulsive.

You have to make the calls you’re afraid to make. Sometimes we have to do things we don’t want to do because we know they’re for the best in the long-run: fire someone, cold-call a stranger, pull an all-nighter to restore the company server or scrap a project and start over. It’s easy to let the looming challenge paralyze you, but the most successful people know that in these moments, the best thing they can do is get started right away. Every moment spent dreading the task subtracts time and energy from actually getting it done. People who learn to habitually make the tough calls stand out like flamingos in a flock of seagulls.

You have to trust your gut. There’s a fine line between trusting your gut and being impulsive. Trusting your gut is a matter of looking at decisions from every possible angle, and when the facts don’t present a clear alternative, you believe in your ability to make the right decision; you go with what looks and feels right.

You have to lead when no one else follows. It’s easy to set a direction and to believe in yourself when you have support, but the true test of strength is how well you maintain your resolve when nobody else believes in what you’re doing. People with mental strength believe in themselves no matter what, and they stay the course until they win people over to their ways of thinking.

You have to focus on the details even when it numbs your mind. Nothing tests your mental strength like mind-numbing details, especially when you’re tired. The more people with mental strength are challenged, the more they dig in and welcome that challenge, and numbers and details are no exception to this.

You have to be kind to people who are rude to you. When people treat you poorly, it’s tempting to stoop to their level and return the favor. People with mental strength don’t allow others to walk all over them, but that doesn’t mean they’re rude to them, either. Instead, they treat rude and cruel people with the same kindness they extend to everyone else, because they don’t allow another person’s negativity to bring them down.

You have to be accountable for your actions, no matter what. People are far more likely to remember how you dealt with a problem than they are to recall how you created it in the first place. By holding yourself accountable, even when making excuses is an option, you show that you care about results more than you care about your image or ego.

Potential and promise are great.

However, all the potential and promise in the world cannot compete when passion, preparation and perseverance are mixed together.

That is the real formula for success.