Is Time On Your Side?

A lot of what determines the arc of your life, your challenges and opportunities, depends on who you were parents were, where you were born and when you were born.

The reality is that we have no control over any of these three factors at the time of our births.

Much is made of the first factor---who your parents are. We hear terms like white privilege but you can say the same thing if you have two parents, or your parents have college educations or they are well off or they are not divorced or they do not have substance abuse issues or anger management issues. The list is endless.

However, disadvantages at birth do not preclude us from succeeding. They are not intractable. In fact, who your parents are is the easiest of the three factors to overcome.

For most people in the world, the country of their birth will be the most important factor in their success or failure in life. If you are lucky enough to born in the United States, as Warren Buffett likes to say, you have won the birth lottery. The opposite is true if you are born in North Korea, Venezuela or Somalia. It is even more difficult to overcome the place of your birth than to whom you were born in most places around the world .

The hardest of the three to overcome is the time in which you were born. For better or worse, we have no choice when we are born and little we can do about the big events that swirl around us.

For example, a young Jewish boy born in Poland in the 1930's was trapped by that time. It is not much different than that for the girl born in Afghanistan 25 years ago. We can escape many things in life, we cannot escape time.

If you consider the last 40 years in the United States, it has been perhaps the greatest 40 year span in history to accumulate wealth.

There is almost no excuse for any Baby Boomer to not be retiring with a substantial nest egg if they had saved and invested along the way. Almost all of the large investment asset categories did well with the exception of commodities. Of course, we know that many boomers did not save enough. 62% have less than $200,000 saved for retirement.

Bullion Vault prepared this chart to show investment returns, by year, for the last 40 years for all the major investment categories.


Long-term bonds increased by an annual annualized return of 8.5%.

Treasury bills, despite the lower interest rates over the last decade, averaged a 4.6% return for the 40 years.

House prices have risen from a median price of $50,000 in 1978 to $210,000 today according to Zillow. That is a 4-fold increase but is only a 3.7% average annualized return. Most people think that their house is a great investment but the reality is that it has returned less than holding cash over the last 40 years.

The median house value increase in the Unites States was just slightly higher than the 3.5% inflation rate since 1978.

A big reason that the last 40 years have been so favorable is the declining interest rate environment we have had. This had the effect of lifting all asset prices, particularly the value of long-term bonds.

For example, an investor who invested in long-term bonds for the 40 years between 1942 and 1981 would have only averaged a 2.3% annualized return. Compare that to the 8.5% average annualized return over the last 40 years.

Let's put some numbers on those returns to show the difference.

When you are born can make a huge difference.

In addition, what you have saved when the timing of the markets turns in your favor also makes a huge difference.

Look at these charts that John Mauldin of Mauldin Economics recently referenced in his "Thoughts from the Frontline" newsletter.

Which age group has made out the best over the last few years as the value of financial assets soared? 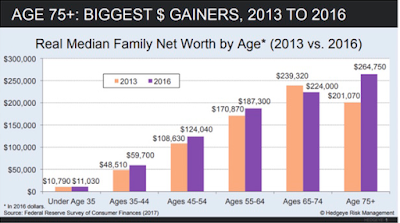 It was those age 75 and over who undoubtedly had the most assets invested and benefited from the timing of those markets. This age group also benefited the most from the favorable asset class returns over the last 40 years.

Who fared the worst?

Those under age 35 who have little saved and invested and are burdened by student debt. They are paying off debt rather than saving for the future. Baby boomers from age 65-74 also saw their net worth actually fall between 2013-2016  but my guess is this is due to this age cohort hitting retirement and beginning to adjust to the drawdown of assets in retirement.

You also see how important timing is in this comparison of real median family net worth by age looking at 1983, 1995 and 2016. 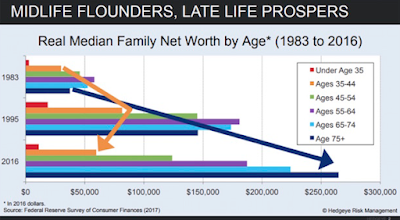 Those 75 years and older have seen steadily increasing net worth over all three data points.

Notice that since 1995 it is only those that are age 55 and older thay have increased their net worths. And it has only been those age 65 and over that have seen a significant increase. Every age group below that age has seen their net worth (in real terms) contract .

A lot of it is timing.

If you are roughly age 60 or older you have had an investment return tailwind at your back for the last 40 years.

Other age groups have had the benefit but for less years and with less invested.

If the younger age groups are going to hope to see the net worth increases of their parents and grandparents, they will need another 20, 30 or 40 years like we have had the last 40 years.

Unfortunately, it is unlikely to happen.

You simply cannot replicate the bond returns we have had for the last 40 years. Interest rates cannot go down like that again causing a rise in bond values.

One of the great advantages of being a young investor is being able to put time on your side. This allows compound returns to really work to your benefit. There is no better savings strategy than simply starting early and staying with it.

Many boomers did not save enough despite the significant rewards that would have come with it. Unfortunately, the future will probably mean higher savings requirements and lower returns that will make it even more difficult for people to see the value of saving.

The savings rates that today's successful retirees have used to get them where they need to be will have to increase in the future due to lower anticipated returns. Time will not be on the side of those retiring in the future. The wind was at the back for today's retirees. The young today will likely face headwinds.

David Blanchett, Michael Finke and Wade Pfau did an in-depth paper that was presented last year at the Pension Research Council Symposium outlining the target pre-tax savings rates required for retirement in a lower return environment.

Here is a chart of the results comparing historical savings rates with those expected to be required going forward for those just starting to save for retirement.

It generally shows that at most income levels and ages, an additional 5%-10% in annual savings for retirement will be required to be set aside compared to historical recommendations.

For example, a joint household of two 30-year olds just starting to save for retirement previously could rely on an annual retirement savings rate the of 8.5% per year given historical returns. Lower expected future returns means that target savings rate now needs to be in the range of 12%-14% per year.


When time is not on your side, make sure that your savings are.

How you spend the rest of the time in your life depends on it.