How much can you believe what you hear on the evening news?

We are told night after night that Donald Trump is the most unpopular and the worst President in the history of the United States.

Trump has reached a 50% approval rating with likely American voters. 49% disapprove of his job performance.

On the same day into President Obama's first term his approval rating was 46%. 53% disapproved.

33% of those in the sample strongly approved of Trump and 39% strongly disapproved. Rasmussen scores that a -6% index score.

However, eight years ago today, 31% strongly approved of Obama and 41% strongly disapproved for a -10% index score. 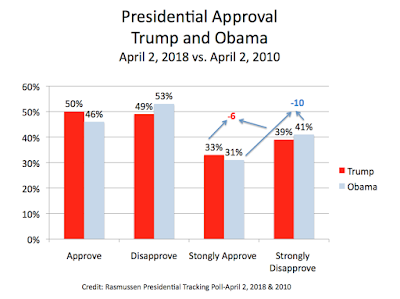 I find these results nothing short of remarkable.

However, look at the numbers again.

His overall approval rating is 4 points better than Obama at the same time.

Those that strongly approve of Trump is 2 points better than Obama.

Those that strongly disapprove of Trump is 2 points less than Obama.

Those that have a strong opinion about Trump (approve or disapprove) is 10 points less than Obama!

I thought that Trump was supposed to be the most divisive President of all time? How could Obama stir up stronger emotions on both the approval and disapproval spectrum than Trump?

Is this being reported anywhere on the evening news?

Consider further that Trump received 46% of the popular vote for President in 2016. This means that his approval rating in this poll is 4 points better than his popular voter percentage on election night 17 months ago.

On the other hand, Obama received 53% of the popular vote in 2008 but over the same period his approval rating dropped  7 points below his popular vote percentage. 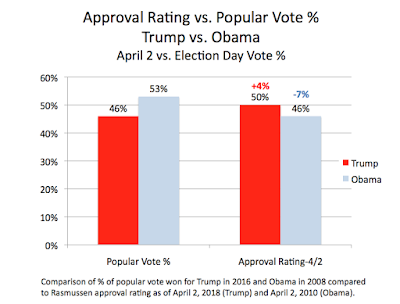 In other words, Trump has performed to the upside and Obama performed to the downside up to this point in each of their Presidencies. You can't say that was predicted by anyone in the mainstream media.

Obama enjoyed a steady stream of positive news coverage from the media from election day forward. In December, 2009 Obama was awarded the Nobel Peace Prize for "extraordinary efforts to strengthen international diplomacy and cooperation among between peoples." His efforts to reach out to the Muslim world were cited specifically. How did that work out in the end?

Granted, Obama was dealing with fall-out from the signing of the Affordable Care Act in early April, 2010 but that was something that the mainstream media was applauding him for.

Compare that to Trump who has had to deal with a hostile press and opponents from election night forward who claim each day that Russian collusion somehow was responsible for making him President. A year and half later they have yet to produce one piece of evidence to prove that.

These numbers are beyond remarkable when you put it entirely in context.

Could it be that the American voter understands better than anyone what is going on in Washington, in the media and in the world than anybody at NBC, CNN, The Washington Post, The New York Times, the DNC or the RNC?

Time will tell. However, how else do you describe where we are today other than to say it is miraculous?
Posted by BeeLine at 6:35 PM